The Rus'2000 small cap is a mere 3pts away from the huge psy' level of 1000. Whether its hit this hour, tomorrow, or next month isn't important. What is the big unknown is how much further can it go this summer? If Trans'7000s, then R2K in the 1100s seems very viable. 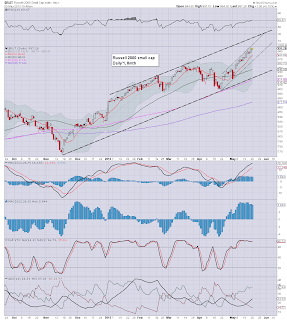 No reason to be short, even though hourly cycles remain suggestive of downside.

Oil has reversed, after minor 0.5% declines, its now 0.4% higher. Its another reason why its just overly risky to go short anything in the current market.

I certainly won't chase oil higher at these levels. There remains a moderate chance of downside for Oil, but I won't attempt that either.

More than anything, bears should be in 'trading account preservation' mode.


UPDATE 11.27am  incredible strength out there everywhere now. Oil is starting to rip higher, with sp'1670s...and R2K @ 999.
Posted by Trading Sunset at 15:55:00
Email ThisBlogThis!Share to TwitterShare to FacebookShare to Pinterest
Newer Post Older Post Home