Expecting a wave higher into March

The main indexes are seeing a multi-day wave lower - much like the one we saw in late December - and we all remember how that turned out. Best guess is that rising support @ 1480/75 will hold..and we will see a new wave higher across March, perhaps lasting into April 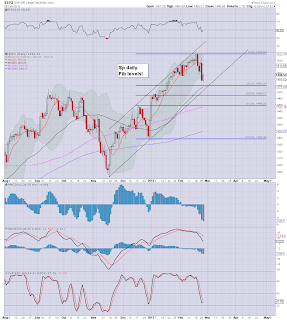 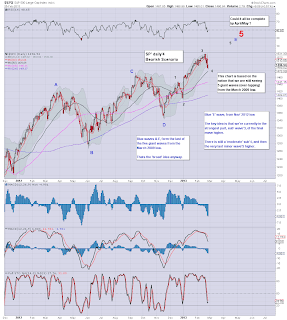 The fibonacci level of sp'1480 still looks a very good target, especially when you consider the 50 day MA, and the rising channel support.

On a very broader wave count, I remain resigned to at least one further moderate multi-week wave higher. I suppose it might be a truncated fifth/E wave, but whatever it is, it'd mean we'll soon see another ramp, taking us into the sp'1550/70s.

I am holding to the small hope there will be a very significant decline in May. Although if we are around 1550, even a 10% decline only gets us back to 1400 - where we began the year. Breaking into the mid 1300s - as some notable chartists are touting, will be...difficult.

Bernanke will appear again at 10am..so the market will have another few hours of the Chairman to focus on. There is durable goods orders before the market opens, and it will be interesting to see what that does to Mr Market before the Bernanke appears.

If the market opens higher, I will be sorely tempted to re-short, if only for a few hours. A move from sp'1505/10 to 1490 would be fine in itself, although my ideal wave'5 target remains 1480/75 - the latter of which seems more likely on Thursday.