It was a choppy market day, and as ever, its important to keep things in perspective. The bigger monthly charts are still warning of trouble, and so far, my original outlook remains on track, with a target of sp'1225 within the next 2-6 weeks. 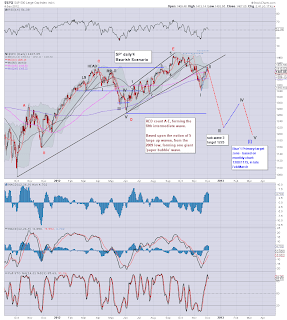 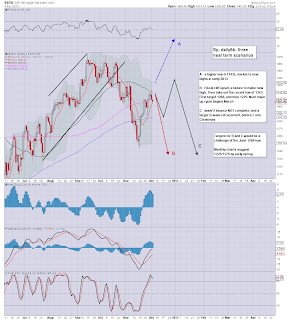 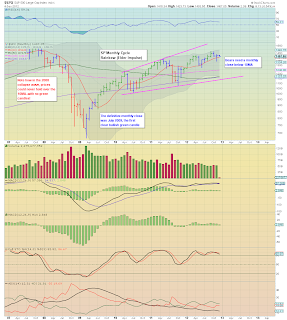 First, I think its important to keep in mind a few scenarios. I am dismissing 'A', I think we're either going to see B or C pan out.

The time frame is going to be really hard to guess, so...I just think everyone who is on the bearish train right now, needs to be patient. The sp'1200s might not be reachable until January.

We have a lot of econ-data tomorrow, not least the ADP jobs data -although most analysts are justifiably dismissive of this seemingly random number generator the people at ADP use. Regardless, the market will take notice of the number, and will then look ahead to the US Govt' number on Friday.

Today was a bit frustrating, not least the opening hour. I will hope for a major gap lower tomorrow, if not Thursday. That would allow my next exit - somewhere around sp'1385...very much easier.