The main indexes closed lower by around 1%, and this has to be seen as a very dismal day for the bulls after Wednesdays 2.3% decline. The one major non-confirmation was the VIX, which closed 3% lower. Near term trend remains most definitely downward, with a primary target of sp'1345. 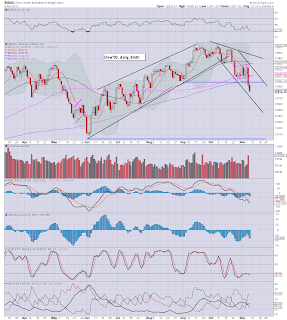 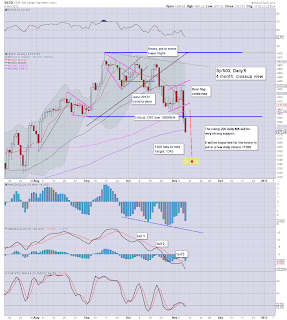 We are now just 2% away from the sp'1345 target - as suggested by the weekly charts. That seems viable as early as tomorrow, or certainly next Mon/Tuesday.

Arguably, there is no point having major short positions after the next major down day. That would likely be it for the bears, for a few weeks.

A strong bounce - across a mere 3-7 days, (I am guessing) will take the indexes from sp'1345 to 1400. It is at that point, where the bears need to put in a lower high on the weekly charts, something we've not done since April.

If bears can put in that lower high, then sp'1200 is viable soon after.