After a four day break the US markets reopened, but the intra-day action really wasn't too much. The SP'500 traded between 1418 and 1405, just about a 1% range. The VIX closed 4% higher, but that small move is inconclusive. 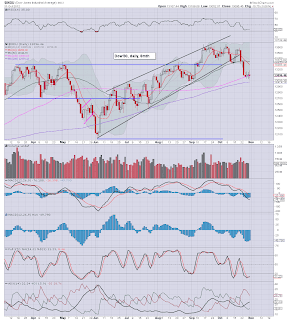 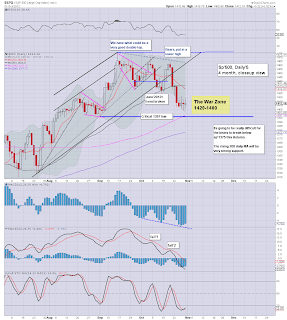 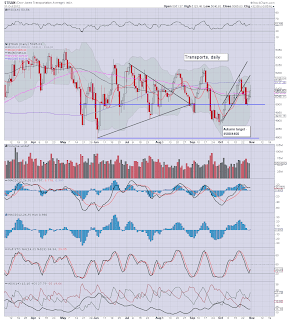 For the fourth day running, the bulls have tried to rally at the open, only to fail. I have to say, I think this is very significant, and regardless of the contrary issue that the bears are 'failing' to break lower, we are at least not melting higher.

The declining daily 10MA @ sp'1429 will be soft resistance on any possible 'stupid bounce'. Bulls should be seeking a daily close >1430, right now, that seems a tough task.

Bears should be seeking a clean daily close under the Sept'3rd low of sp'1397. Anything trading activity in the 1380s should be good evidence that the 'door is open'.

The weekly charts would suggest a move to around 1335/20 within the next week or two. I can't imagine anything lower than that, regardless of any 'spooky news' in the next few days..and especially across the weekend.

A little more later...which will be focused on how we closed October.
Posted by Trading Sunset at 00:00:00
Email ThisBlogThis!Share to TwitterShare to FacebookShare to Pinterest
Newer Post Older Post Home