WTIC Oil closed the week lower by 2.4% to $89.88. After waiting for some weeks, WTIC Oil has met my price target, and I'm calling it my second red flag warning for the Autumn. 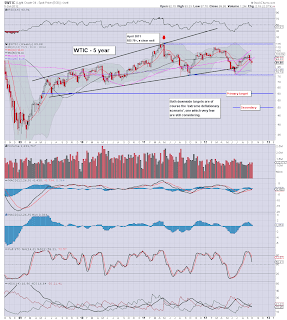 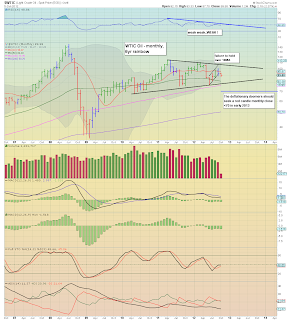 So, we have a weekly close under $90, and that is pretty suggestive of further weakness into the Autumn. Interestingly, the monthly rainbow chart is now sporting a red candle!

Next downside target is the big $80, and then a test of the June low of $77. If we take out 77, then my very bold primary target of $60 is viable. Of course, that level would probably equate to an equity market that has seen considerable declines, somewhere in the region of 15/20%...sp'1200.

It is certainly something to keep in mind as proceed this October.

My third red flag target is a weekly VIX close >20. The big 20 is some 35% higher than current levels, we'll need some major VIX jumps higher, and those jumps will need to hold just to have a chance at closing the week above 20.

If we can get this third red flag achieved by the end of October, I seriously think the bears have a real window of opportunity to smack this market lower. The target would be somewhere in the sp'1200 area. Right now, that looks a very...very long way down.