How will October conclude?

Today was actually a little exciting with the Goggle price drop (never mind the early-release mess), but generally speaking, the last 7 trading weeks have been pretty tight. We've traded between 1427-1474, that is a mere range of 3.5% or so. That is not exactly dynamic, for what is often a volatile October!

Lets take a look at a few of the rainbow (Elder Impulse style) charts... 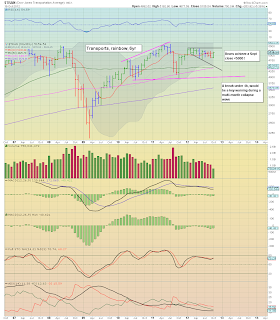 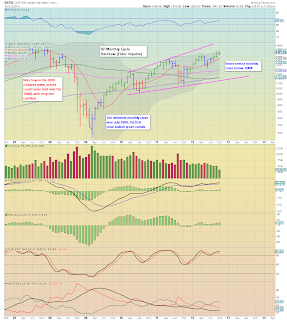 First, lets consider the transports, which has been in a world of its own for a few weeks now. It started the month with a third consecutive red candle on the rainbow chart, but...its flipped green. Somehow, the tranny has ignored the main market, and is +5.4% on the month! That is pretty damn impressive.

If the tranny can close over 5250, that would be a conclusive break-through to the upside, and then the next target into year end would be >5400.
-

The sp'500 index is much more subdued than the tranny, and so far is +1.2% this month. Not exactly a move other than 'noise', although it is a green candle again.

We can clear about this right now, as we currently stand, the primary trend remains UP - even for the battered transport index, which is seemingly trying to claw its way above what some bull maniacs could justifiably argue is actually a giant 10 month wide bull flag! 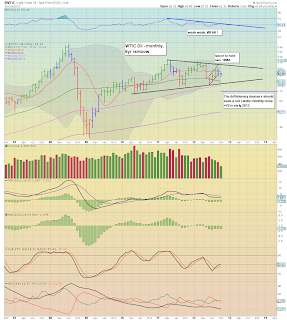 Those looking for deflationary pressures need only look to WTIC Oil. Considering that the Bernanke has launched QE3, it is somewhat remarkable that WTIC is not trading >$100. Then there is the 'middle east doom' premium, there sure has been some activity there lately, and again, its amazing we are not trading well above $100.

For the moment, the underlying weak global economy is a more powerful force than the insane money-creation action of the central bankers.

Friday is opex, and should probably be a little more choppy than today. If Thursday was a turn day - concluding a 3 day rally, then perhaps we'll see some more downside, a close <1450 should (if attained) be considered a bonus to the bears.

As noted in earlier postings, key levels to be mindful of, sp'1427..and then 1397. If the latter is taken out in the next down cycle, then things might finally start to get a little serious.

We have 9 trading days left of October, hopefully...they will at least be 'entertaining'.