The main indexes closed lower today (surprise!), lead by AAPL. The declines - as small as they were, do make for a possible reversal day.

I suppose some might even dare call it a double top on the SP'500, but regardless of what anyone might like to call it, we did break a new post 2009 high. The primary trend - as seen on the weekly/monthly cycles, remains UP. 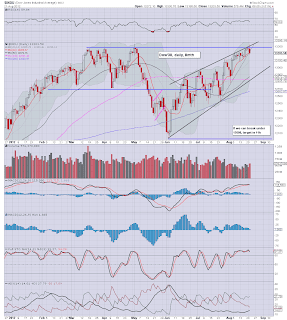 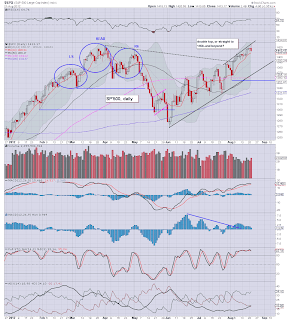 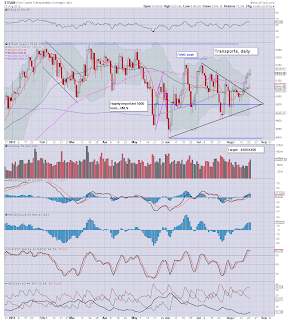 From a MACD (blue bar histogram) perspective, we're pretty high on the cycle, and we could certainly fall some considerable way - easily to the equivalent of SP'1380/70 in the coming 3-7 trading days.

In price terms though, it remains clear, until we get a few closes under the recent cycle low of sp'1354, the bears remain having serious problems.

The Bernanke @ Jackson hole next Friday remains the most critical of issues for the bears. Even though the recent rally all the way from Sp'1266 has been based on near zero volume, its feasible we could see a lot of real buyers come in if we level out before breaking 1354.

If we are somehow around 1370 late next week, and we are floored on the smaller cycles, I'll be inclined to go long. The upside target from 1370...would be around 1450/75 by late September.