I was short a day early last week..which was of course annoying. Today's exit made for a great gain to begin the week. Now..its back to the 'how long can I wait until I start whacking buttons' game?

It looks like the sp' will hit the declining 10MA - currently 1354 by the close. That sure will be a tempting place to re-short. 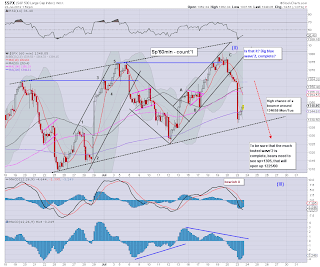 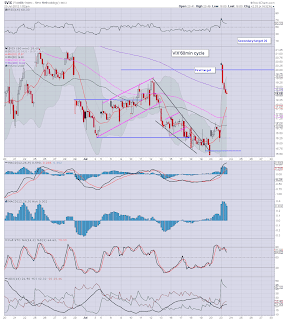 VIX is massively lower than the opening gap higher. I'd certainly not see this as a problem, its kinda normal for the VIX to collapse back almost all of its initial jump higher. What is a good thing is that we did at least hit..and break over VIX'20 this morning. The next threshold to break will be 24/25, I'm pretty confident we'll be around that level by the end of this week.

So..right now I'm just watching. It is very possible I'll sit it out until tomorrow.

With the MACD on the hourly cycle still resetting itself higher, this could last into much of tomorrow.

Under ANY circumstance, I will be short again no later that the Tuesday close.
Posted by Trading Sunset at 18:54:00
Email ThisBlogThis!Share to TwitterShare to FacebookShare to Pinterest
Newer Post Older Post Home