As expected, minor declines for early Monday. VIX is up 2%...barely qualifies as 'noise'.

I'd guess we trundle lower for 3-5 hours - I don't expect anything <1345, and start to show an upturn late in the day. No point re-shorting here, even though the Bernanke speaks tomorrow - often a somewhat bearish event. It still looks like the maniacs want to at least make one charge this week to take out the recent 1374 high. 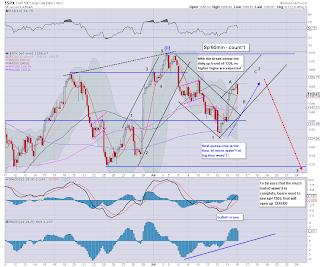 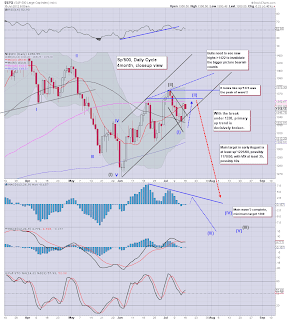 Seeking a B' wave lower. I suppose it could last all the way into early Tuesday...too difficult to say.

I am not going to get involved in this chop-fest. I'm sitting it out until the daily cycle starts to rollover again..and right now, there won't be any sign of that until late Tuesday at the very earliest.

*Bernanke speaks both tomorrow AND Wednesday, so we have some good entertainment this week.
--

*recommneded reading... Ultimate Death Cross
I have a lot to say on this issue, but I'll save it for my closing post of the day later this evening.
Posted by Permabear Doomster at 14:51:00
Email ThisBlogThis!Share to TwitterShare to FacebookShare to Pinterest
Newer Post Older Post Home