A scary chart for Sunday night

With one hour of the futures now elapsed, sp is set to open 2pts lower. So far then..its all mere 'noise'. If futures are -5 or more, that just about breaks below the bear flag on some of the indexes. 10pts would make it for sure.

I've read around the finance sphere quite a bit this weekend, watched a few dozen videos, and the consensus is we're going down. Even some of the more conservative writers I follow are seemingly content to note down late summer targets in the low sp'1100s. Does that sort of consensus conversely mean we're going to somehow gap up dow+100 in the morning on 'LTRO'3 hopes'?

To end the weekend, and set up the week ahead, the following is a new 'doomster' chart to consider. 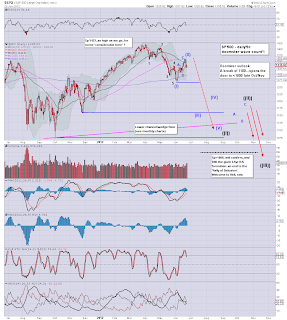 There are a few key issues to note in the mid-term.

1. We need to break 1266...if that can be taken out quickly (no more than 2 trading weeks), then we should have a good shot at 1225. We'll doubtless get some kind of bounce..before the first major attempt to hit the rising floor in the low sp'1100s (pink line, see monthly chart below)

2. Whether or not we break below 1100 this summer in the first attempt, I don't think that is too important.

3.  A break of sp'1000...will confirm the greater theory that the entire post March'2009 lows was nothing less than a giant H/S formation - as seen even more clearly on the VEU charts I now regularly publish.
--

Of course, the Bernanke will be out there later this August, and he could easily wreck any outlook..so bears will need to be mindful in late July/August.

Primary target for this summer remains sp'1150/00 - as derived by the monthly chart. 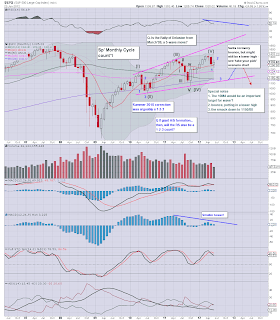 It will be a busy week ahead, and unlike last week....the bears can proceed without any fear of the FOMC/Bernanke.

Goodnight from London...and good wishes for your trading week ahead.
Posted by Trading Sunset at 00:00:00
Email ThisBlogThis!Share to TwitterShare to FacebookShare to Pinterest
Newer Post Older Post Home