2pm update - Germany verses one of the PIIGS

Once again its that time of day again, its time for another Euro 2012 match. Tonights battle is between the mighty Germany and the insolvent Italians. 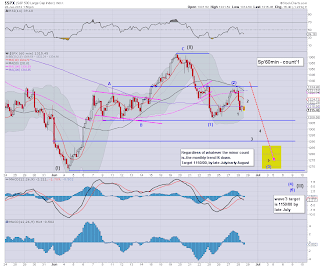 *micro-wave'2 (black count) might already be done, a baby bear flag...if you see 1313s before the close, then we're probably in micro-wave'3.

A close under 1320 would certainly be preferred right now, anything in the low 1310s would be more than good enough, and open the door to a nice gap lower tomorrow morning in the 1300/1290 area.

The VIX remains somewhat quiet, I'd like a close at least in the low 21s.
---

*a few other notable issues today..

More later..but I do have a match to focus on too ;)
Posted by Trading Sunset at 18:51:00
Email ThisBlogThis!Share to TwitterShare to FacebookShare to Pinterest
Newer Post Older Post Home