Whether you call it 'end Q2 window dressing' or hyper-bullish EU summit news, this move into the sp'1350s is a real problem for the orignal bearish outlook. Arguably though, the 'serious money' bears would have already bailed during yesterdays closing hour - which now pales into insignificance compared to this mornings action..

The daily charts are still holding under the FOMC peaks...except for the Russell 2000 small cap, which now has a clear break over the equivilent of sp'1363. Similarly, VIX is still holding over the FOMC low of 16.77

So..the bulls out there should merely be seeking VIX to break into the low 16s..and sp'>1363.Considering the gains they already have today, they need not be in a hurry to break 1363 today..or even next Mon/Tuesday. 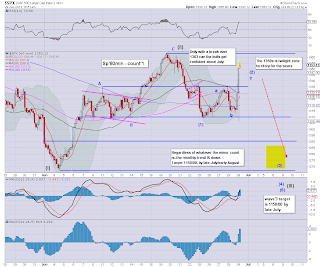 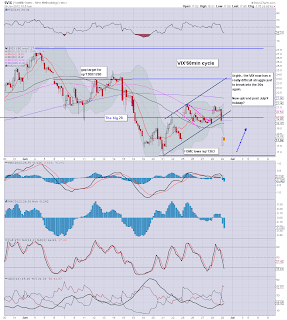 A lousy way to the end the week, month..and quarter. I should probably hibernate until next Fridays jobs data.

Ohh, but even if next weeks monthly job data is a REALLY bad number (even net losses), that means QE3 hopes are back again..so.a continued summer rally to sp'1550 ? Right?

I'm really not sure which is sicker..the US economy..or the NYSE.
Posted by Trading Sunset at 15:52:00
Email ThisBlogThis!Share to TwitterShare to FacebookShare to Pinterest
Newer Post Older Post Home