An important morning ahead. With very poor ADP jobs data, market is getting an excuse for follow through to the downside. The natural cycle for the 60min cycle was inclined to be down anyway this morning (as I posted yesterday lunchtime)..so, this opening minor drop is not unexpected. The critical issue is whether we can break the recent low of 1394. I guess it could be said its not important for it to be done this morning - rather than by the close of today, but it will be much harder to do later. The bears need to see weakness down to 1390.. now! 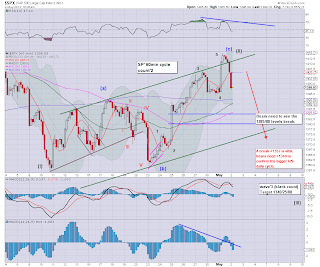 You can see the key levels, most important of all, bulls need to hold that 1385/80 zone...otherwise..real problems. However, low 1380s..even 1370s look an awfully long way down. There isn't the momentum right now to get this market lower, bears need more bad news!

*regarding the 1-5 count (in black). Its really just a vague guess. I suppose it could be right, but with the market as it is, its a VERY unreliable count. Only with a move <1380 would I say 'it was probably right..after all'. 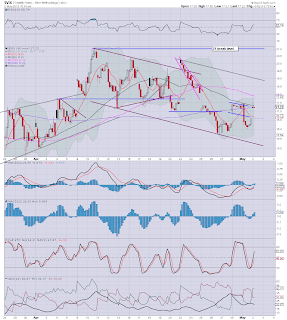 Bears really need to see VIX close in the 18s either later today or early Thursday.
-

Spanish IBEX is falling again, even clown channel was highlighting it just earlier. IBEX 6800..with around 1800pts to fall in the 'near term' - as I stated for some weeks now.