The downside momentum was not enough to decisively break under the recent 1394 low. So,..up we go again.
Looking at the hourly cycle, are we setting up a mini head/shoulders formation? To confirm it, first we need a fail/rollover at the 1405/10 level...and then a swift move to break <1394. Its something to watch for as the day develops, and into Thursday. The RS - if that's what it will be, might take until late Thursday to fully form, and that would set up the major snap/fall under 1394 this Friday -when the big jobs data is released. 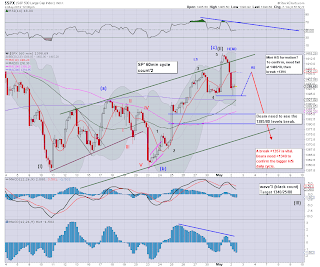 From a MACD cycle perspective, we are already very low, and due a few hours to the upside.