Those weekly cycles sure didn't look good for the bears, lets now take a look at those bigger and even more important monthly cycles. 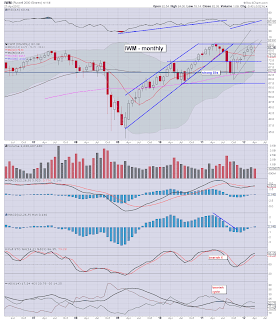 IWM is down 0.5% this April, but we are now well outside of the bearish danger zone. This months action is kinda reminiscent of last November/December - early losses, all quickly recouped. From a cycle perspective, the MACD is right back on track, with 4 months of increasing bullish momentum. There is nothing bearish here. Only a break under the 10MA - just a touch under 76, would make me bearish on this index. Bulls only need 1.6pts higher (around 2/3%) to fully confirm the resumption of the post October bullish trend. 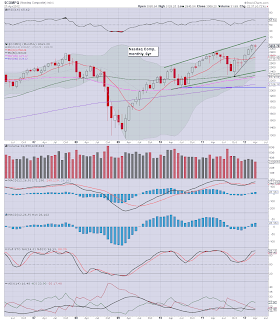 The tech' is only -0.7% across the month. Interestingly, it is scraping near the top of the bollinger bands, and further increases will certainly be more difficult than those first few months since last October. General price momentum continues to increase, there is NOTHING bearish here either. 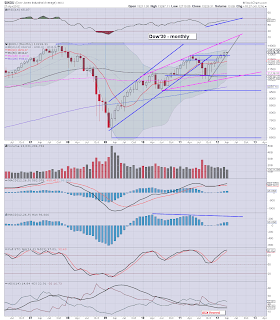 Disturbingly, the Industrials are actually net-positive, just 0.12%, but considering all the problems out there, this is pretty extraordinary.. Near term 'comfortable' upside would be to around 13500. Bears really need to see a break below the 10MA around the 12300 level to have any hope of a broader trend change. Right now, 900pts to the downside looks an awful long way away. 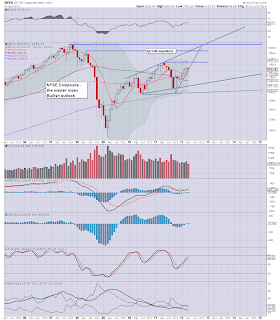 The NYSE comp' - as noted many times, never did surpass the summer 2011 highs, not even close. With just one trading day left of April, this index has lost 0.7%. All the standard indicators remain bullish. There is now no longer any sign of a trend change to the downside. Bulls will need to see a break above 8327 to confirm a resumption of the primary upward trend. Upper target would be around 8850 - around 9% higher. 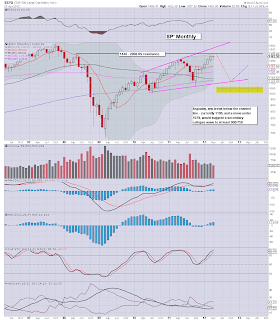 Looking at the SP' chart, I'm arguably inclined to see this April's action much like March'2011. Does this suggest May 2012 is April'2011..and so forth? Regardless, the upper bol' first target would indeed be a new high of 1435/40 within weeks..if not days. Only a monthly close under the 10MA of 1289 would get me bearish. Even then, just like for April, how we close May will be paramount. Clearly, there is nothing bearish about the SP'500, the post October low trend line still points toward 1550, although bulls will really have to ramp this market up in May if we are to get back on schedule for a re-test of the all time highs. 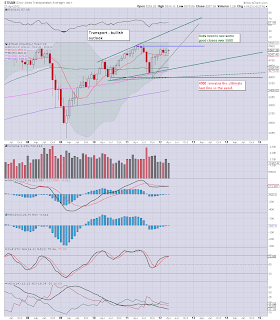 The Transports are following the lead of the Dow, and are actually even a touch stronger, up almost 0.3% in April. However, the Transports remain absolutely stuck in a narrow range for the past 4 months. As noted in the weekly update, the direction in which the Transports breaks will probably be a decisive sign/warning to all traders in the weeks and months ahead. Arguably, it is the most important index to watch this summer.

So we have the Dow and the Transports already a touch positive for April - pretty incredible. The other 4 are all down, roughly 0.5% or so. In the scheme of things, we can say April will close largely flat.

Bulls should be happy with a flat April, and are now just 1-2% away from breaking new highs on each of the main indexes..which if it occurs, would probably lead to at least a further 5-10% in the early summer.

Bears have got to be pretty devastated with April, not least the past 4 trading days. Despite a truck load of lousy econ-data, a downgrade of Spain, and other world issues, the markets still recovered and closed confidently on Friday.


Whether long or short, the stop-levels are clear

A break over Sp'1422..the 'big money' bears have to abandon all hope, at least for another 2-3 months.
Only with a break back under last weeks lows - Sp'1358, could the bears justifiably get confident of much lower levels in the near term.

April was a difficult month to trade, I'm guessing May won't be any easier.