They're all coming out of the cave this weekend

London city has been grey all weekend, and it matches my mood perfectly. Being on the wrong side of this market is never easy, especially whilst knowing that when the futures wheel opens later tonight at 11pm UK time, it'll probably show a pretty deep red colour all across the finviz futures page.

Monday looks set to open significantly lower, if the Friday futures wheel was correct, then we'll be down around 15/20pts... to around sp'1380 by late morning. A little minor bounce, and then tailing into the close, maybe we'll end sp'1375/70 - which are pretty key levels as I stated in my previous post.

There is a fair bit of bearish hysteria across the various boards and sites this weekend, with endless charts suggesting a major wave lower is now underway. Very few sites and their regular posters seem to be touting a continuation of the current 6.25 month long rally. The bizarre fact remains that we're only sp'24pts off the recent high, and yet once again, many are going nuts over what is a mere 1.75% decline from the peak. 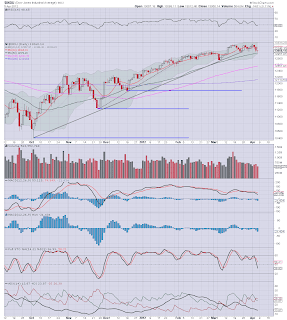 Dow 12800 looks a pretty reasonable 'best bear case' for Monday at some point. That would be a good 250pt fall, and then we'll just have to see how many of the algo-bots decide whether its dip-buying time again. 12300/11800 would be a pretty broad target range - were a new down wave to occur.


What about all those other top calls the doomers made?

The problem I have is that many of them were loading up with truck loads of TZA, ERY, or worse...more recently - the TVIX. Most of those holders are still 50..even 75% down on their positions. They need SP'1300 just to have a slim chance of getting back to breakeven.

A bit, I will admit, but its more from seeing yet another long list of bloggers, and the main financial 'bearish sites' calling for a major wave lower...yet again..for probably the 6th or 7th time since last Octobers floor.

I'm indeed tired of much of this nonsense lately. As one of the 'bear team', it would of course be painfully ironic if I miss another huge down wave. However, at least Monday will be somewhat entertaining to watch.