They sure are battling it out this morning. The bulls thought they had broken above the bear flag in overnight trading...but no...we open weak.

There is no reason to believe we won't be at least moderately lower by the close. Sure there could be some choppy action, but overall...I'm looking for low 1370s later today. 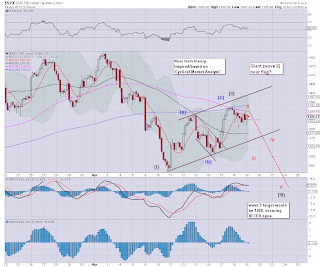 They are trying to break back above the 10MA on the hourly at 1387/88. Considering the mood, it won't be easy for them to hold this level beyond 11am.

Only a move over 1400/05 would have me concerned, and as noted last night, anyone with serious money should have equivalent stops at 1410/15. What matters is that the bear flags on the daily charts are absolutely clear as crystal...we ARE in a bearish formation.

First target remains 1340, although I'm increasingly starting to believe 1300 is maybe even more likely - considering the state of the weekly/monthly cycles.

We have opex tomorrow of course, so...the bigger moves are more likely next week.