US equity indexes closed broadly weak, sp -13pts @ 2036. The two leaders - Trans/R2K, settled lower by -0.7% and -2.0% respectively. Considering the 3 day holiday weekend ahead, and the smaller hourly MACD cycle, there is significant threat of renewed upside into early next week. 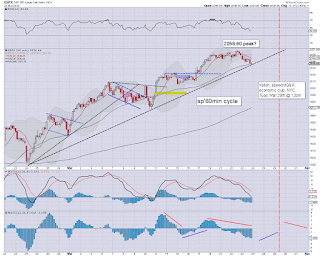 *closing hour action: micro chop, and still leaning to the upside.. holding rising trend (at least for the sp'500).
--

Broadly, a day of moderate weakness.. but with WTIC Oil breaking below the $40 threshold this afternoon, the normal latter day rally was stunted.

Instead, we have indexes closing near the lows. Not a dire close for the bulls, but it sure ain't pretty for a fair few stocks.

In terms of price... the indexes are all at prime re-short levels. In terms of time.. we've seen a clear SIX weeks.. which is also more than enough.

There is a problem with the DISQUS comments system. It is not specific to this blog/site.. many others across the world are being impacted.

I can receive and reply to comments (via emails/moderation page), but they will NOT appear in the actual post (at least to most users).