VIX recovers into the weekend 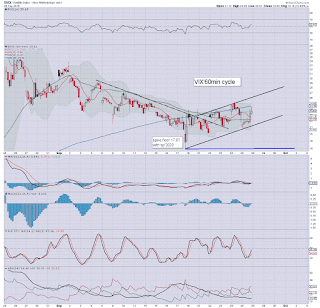 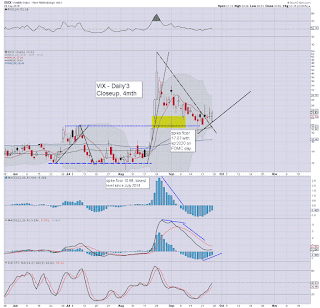 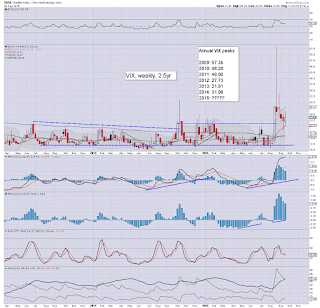 The opening hourly candle was a classic reversal, and was certainly confirmed via the net daily decline. Indeed, with the weekly close in the 23s.. the VIX bulls can look forward to the upper 20s.. even 30 threshold next Mon/Tuesday.

A bigger issue will be for some divergence between an equity lower low (<sp'1867).. but with a lower high in the VIX.


*I am holding a VIX-long position from the 23.40s.. seeking an exit in the 28/30 zone... on Mon/Tuesday.
-
more later... on the indexes
Posted by Permabear Doomster at 23:00:00
Email ThisBlogThis!Share to TwitterShare to FacebookShare to Pinterest 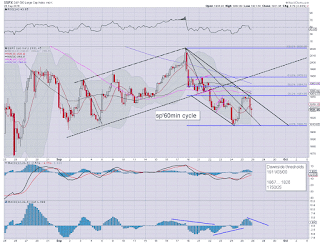 *closing hour price action: pretty fierce... as the market battled it out.. not least as some are still clinging to the notion of upside to the 200dma.
--

Suffice to say... equity bears should be very relieved.   I sure am.
-

*the usual bits and pieces across the evening to wrap up the day...
Posted by Permabear Doomster at 21:02:00
Email ThisBlogThis!Share to TwitterShare to FacebookShare to Pinterest

3pm update - things are starting to get interesting

US equities have seen a rather fierce snap lower in the 2pm hour, with the sp' cooling from an intra high of 1952 to 1927. VIX is seeing a mini explosion to the 23s... the 24s now look viable by the close. The broader trend remains bearish.. and today has now become a 100% FAIL for the bull maniacs. 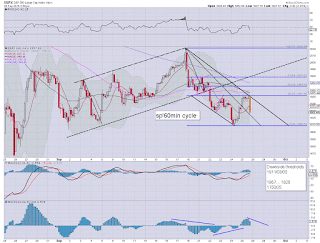 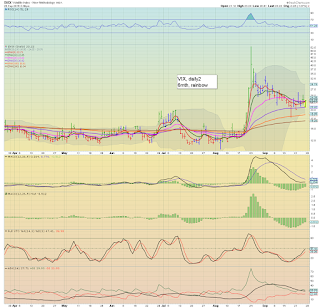 Frankly.. this is not just very pleasing to see... but pretty funny too.

The pre-market gains were utter nonsense... and here we are... RED indexes.... with sig' net weekly declines for most indexes (Dow is the exception).

Regardless, some rather powerful tech' damage has been done to the rally from yesterday.

ANY daily close in the 1920s would give strong bearish clarity for Monday.

*underlying hourly MACD cycle is set to turn neg' Monday morning... momentum IS swinging back toward the bears.
-

Weakness into the close...   eyes on the VIX.

*as things are.. I remain SHORT-spy... LONG-VIX.... currently intending to hold across the weekend.
-

Broadly though.. the damage has been done this afternoon... the daily/weekly cycles continue to offer much lower levels next Monday... lead lower by the R2K, currently -1.4%

VIX 23.30s... having cooled... renewed upside into the close... probable.
Posted by Permabear Doomster at 19:51:00
Email ThisBlogThis!Share to TwitterShare to FacebookShare to Pinterest

2pm update - are we closed yet?

US equities break a marginal new intra high of sp'1952. VIX remains under downward pressure.. not least as the weekend looms, -6% in the 21.90s. As things are, the sp'500 is still set for a second consecutive minor net weekly decline. 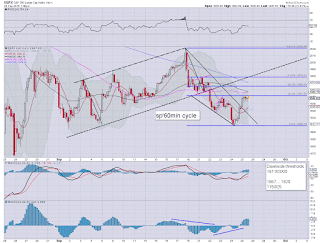 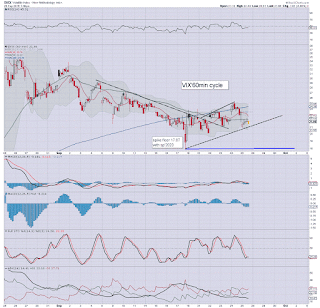 Little to add... as the week is soon to wrap.

A net daily decline sure would be something to end the week.


2.24pm.. Looks like something hit the big EXIT into the weekend button.

VIX 23.07...
Posted by Permabear Doomster at 18:50:00
Email ThisBlogThis!Share to TwitterShare to FacebookShare to Pinterest

US equity indexes continue to battle it out, with continued threat of cooling into the sp'1930s..with VIX 23s. As things are... most equity indexes are still on track for net weekly declines (<sp'1958). Gold remains notably weak, -$7. Oil has lost most of the early gains, now +0.5%. 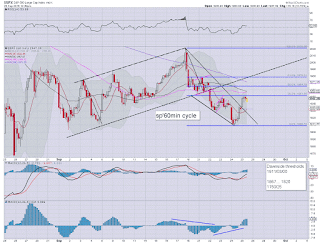 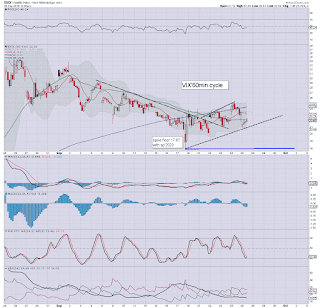 Hourly equity cycle is offering a baby bull flag, and to me.. that is now the major threat to those holding short across the weekend.


Meanwhile... today's price action feels like being on the SS Bear.... which has a rather significant hull breach. 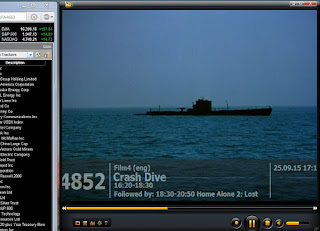 -
back at 2pm
Posted by Permabear Doomster at 17:51:00
Email ThisBlogThis!Share to TwitterShare to FacebookShare to Pinterest

12pm update - everything is all fine again?

US equities are holding moderate gains, but there remains increasing threat of a return to the sp'1930s this afternoon, along with VIX 23s. The rest of the day will offer a major hint of what is ahead next week... whether renewed weakness.. or a straight run to the 200dma in the 2060s. 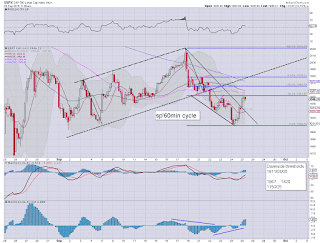 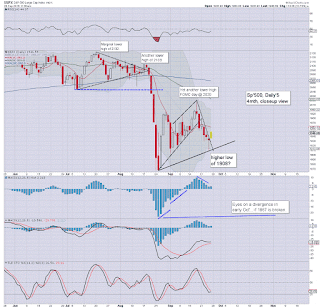 The ultimate issue now is whether 1908 is a key low... that will last into mid Oct'.... or if its just a brief tease to the bulls.

Other than sheer technical reasons, today's rally is pure nonsense... I sure won't take any long positions right now.
--


--
back at 1pm
Posted by Permabear Doomster at 16:51:00
Email ThisBlogThis!Share to TwitterShare to FacebookShare to Pinterest 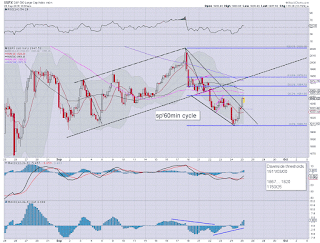 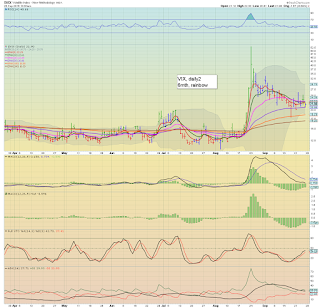 *I am looking for a closing green candle on the VIX 'rainbow' chart.
--

So... what now? Its the typical morning turn time of 11am... bulls will be vulnerable for the next 3 hours or so. A foray into the sp'1930s looks a given by 1pm... but the real issue is whether we see a secondary wave higher to >1955... or instead.. close moderately lower.

A red close would be particularly bearish.. considering the broader price structure...

The bull maniacs need a close >1958 for a net weekly gain... that doesn't look as easy as it did in pre-market.

--
stay tuned
Posted by Permabear Doomster at 15:58:00
Email ThisBlogThis!Share to TwitterShare to FacebookShare to Pinterest

US equities open with borderline significant gains.. to sp'1949, but there are some signs that the rally is not sustainable. The micro 5/15min cycles are clearly over stretched, and there is threat the main indexes will close net lower. Broadly.. bears should be seeking a weekly close <1958.. preferably 1950. 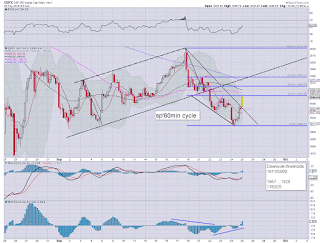 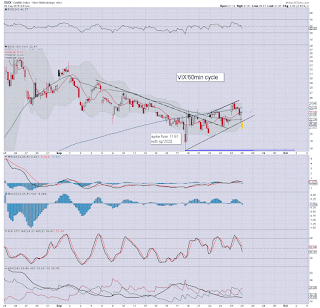 *a clear opening reversal candle in the VIX.
--

We have a long day ahead... if the bulls fail to hold any gains today.. it will be yet another reminder of the broader weekly/monthly cycles which are unquestionably broken.

*I remain moderately short.. with ZERO interest in switching long.

We'll no doubt get a down cycle into the afternoon.

... the 1930s look due... which would really spook many.
Posted by Permabear Doomster at 14:53:00
Email ThisBlogThis!Share to TwitterShare to FacebookShare to Pinterest 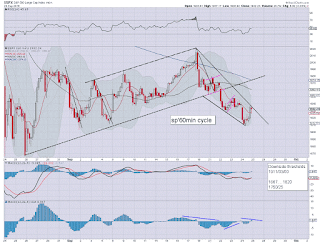 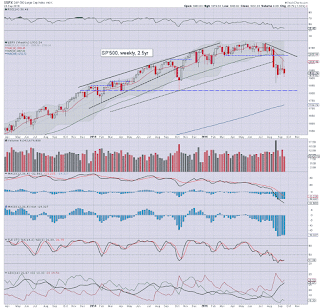 So.. what is the reason for the overnight ramp? Other than technical reasons, there is ZERO reason why this market should be able to keep pushing higher into next week.

I realise some out there are calling for a straight run to the 200dma in the 2070/60s... but to me, that seems ludicrous... considering the broken weekly/monthly cycles.
--

*Equity bears should be fighting to see a weekly close <1958... to maintain at least some degree of net weekly decline.
--

Yours truly is half short of what I held at the Thursday open. Even so, this is going to be a painful open. I will likely hold across the weekend... I ain't closing out in the 1950/60s... only to see the market fall again next week.

As things are... I won't be content unless a daily close <1945.. with VIX 21/22s.
Posted by Permabear Doomster at 11:57:00
Email ThisBlogThis!Share to TwitterShare to FacebookShare to Pinterest

It was a rather dynamic day in the US equity market, with the sp' seeing a morning low of 1908, and then seeing a somewhat natural latter day bounce to settle at 1932. The broader trend remains increasingly bearish, with all US indexes set for net weekly declines. 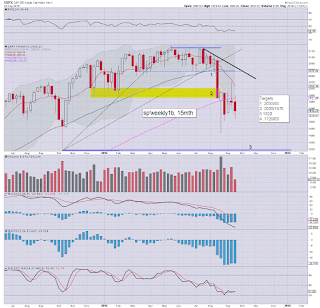 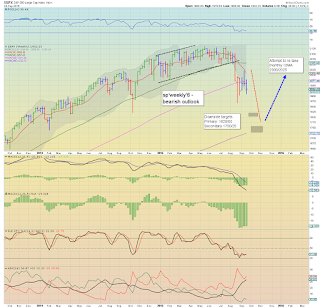 *weekly 'rainbow' candle was red in the early morning with sp'1925. A weekly close with a red candle would be something I'd like to see.
--

The broader down trend from the FOMC high of sp'2020 continues, despite some rather powerful intraday rallies.. as seen today (1908-1937).

*Fed officials Bullard and George are due to speak... Mr Market will be listening.
--

The moderately anticipated Yellen speech at Amherst was largely as expected.. well, until the last 5 minutes or so when things started to turn outright disturbing. 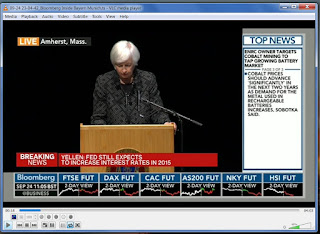 Frankly, it increasingly looked as though Yellen was going to keel over.. and worse. I am largely contemptuous of much of her monetary policies, but I sure don't want to see someone die at the lectern. Let us not forget, 'Aunt Janet' (are you out there Oscar?) is 69 years of age.. well past any reasonable retirement. It would be very understandable if the pressure is getting to her.

Anyway... besides the speech drama, the notion of the Fed raising rates in Oct... or even at the Christmas FOMC seems like crazy talk to me. Hell, if the sp' is in the 1800s next week... mainstream talk will then swing to QE4. After all, Q1, 2, and 3 solved the macro-economic problems, why not do another one? Hell, why not just announce QE4, 5... all the way to 10 in one press release? 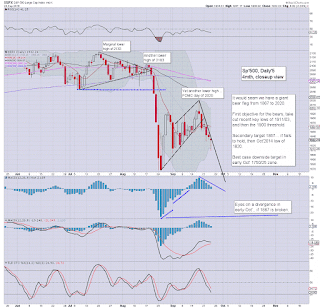 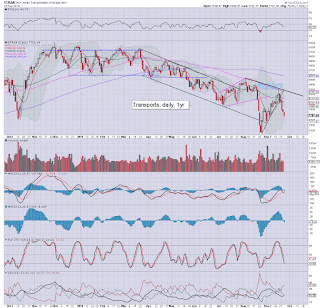