VIX turns higher into the close 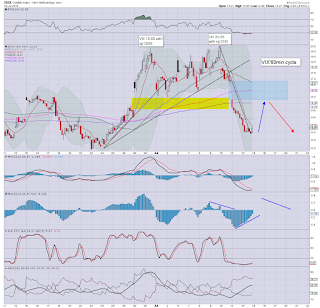 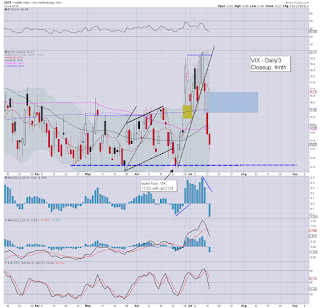 *closing hour price action in both the VIX and equities was a likely hint of 'Wednesday trouble'.
--

A move higher to the gap zone in the 15/16s looks probable for Wed/Thursday.

The big VIX 20 threshold looks out of range in the near term.. and probably until the latter half of August.
-- 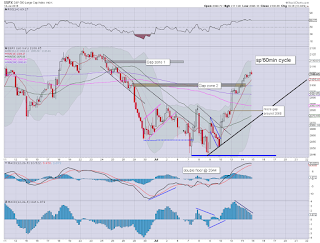 *closing hour, a distinct touch of weakness, offering a hint of tomorrow.
--

-
more later.. on the VIX
Posted by Permabear Doomster at 21:02:00
Email ThisBlogThis!Share to TwitterShare to FacebookShare to Pinterest

US equities have managed to claw another point higher to sp'2110. Cyclically, the market is still due to break lower within 1-2 trading hours... with Yellen a very valid excuse tomorrow morning. Regardless of any weakness tomorrow, the broader trend still looks bullish into early August.. before things might finally get 'interesting'. 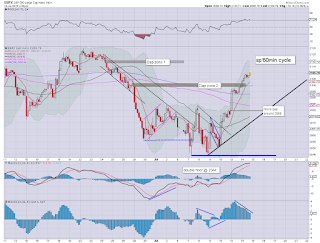 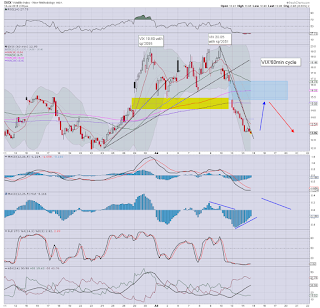 Well.. the market sure is taking its time in exhausting this up wave.

From a pure cyclical perspective.. this market is due to break lower... and by the Wed' close, there will be very strong support around 2080.

--
*I am on the sidelines. having dropped INTC-long near the open. If I'm correct about Wed' weakness... INTC is going to really struggle tomorrow... and if <29.30.. it would bode badly for the market reaction to earnings.
-

Regardless... we're still due a down wave... with the Yellen tomorrow.

Bulls arguably getting an opportunity to exit into strength... ahead of the Yellen.

Downside target remains 2080.. but I realise that is a full 1.5% lower.. and that sure feels a long way down right now.. and probably out of range for tomorrow.

So.. maybe any down cycle will drag out into Thursday.. .before rallying on Friday.
-
Posted by Permabear Doomster at 19:54:00
Email ThisBlogThis!Share to TwitterShare to FacebookShare to Pinterest

US equities are stuck around the earlier high of sp'2109.. with VIX in the low 13s. The hourly cycle remains on the high side, and there will be ample opportunity for the equity bears to make an appearance within the next 5 trading hours. 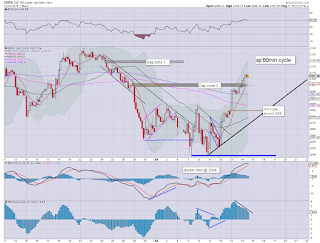 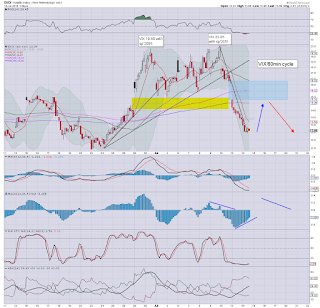 Price action is increasingly stuck.. and the hourly equity cycle is due to turn negative in 2-3 trading hours. Certainly, we look set to lose the sp'2100 threshold by tomorrow.

As ever.. Yellen is a wild card...  there is also a Fed beige book at 2pm tomorrow.

--
*I continue to have eyes on INTC, but near term price action - considering the indexes, is particularly weak.

Broader price structure (as I've been droning on about for over a month) is a giant H/S formation.. offering downside to at least 26/25.. ideally $22.50.

I still think INTC is a key signal for the broader market.. and if correct, it bodes for main market trouble this Sept.

--
Meanwhile in London city... approaching grey gloom.. from the west.

--
stay tuned
Posted by Permabear Doomster at 18:52:00
Email ThisBlogThis!Share to TwitterShare to FacebookShare to Pinterest

US equities are holding moderate gains, but look increasingly vulnerable this afternoon, and much more so.. across tomorrow morning. A natural retrace to around sp'2080 - with VIX 15s, looks probable.. with Mr Market using Yellen as an excuse to 'get spooked'. 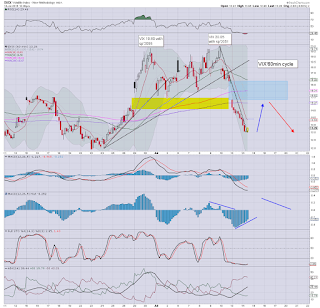 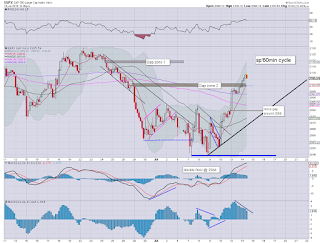 *I do refer anyone to the VIX update from Mr T'... added late in the previous hour.
--

Broadly... the weekly cycle is continuing to suggest upside into early August.. before things 'get interesting'.

--
back at 2pm
Posted by Permabear Doomster at 17:50:00
Email ThisBlogThis!Share to TwitterShare to FacebookShare to Pinterest 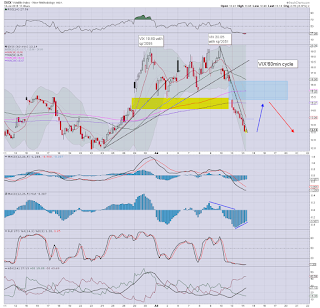 For the equity bears.. its been a rough time since last Friday morning. Regardless of any weakness this afternoon.. and tomorrow morning, the broader trend still looks upward into August.
-- 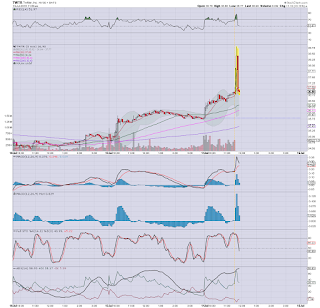 Rumours of a $31bn buyout offer... but right now... subsequent chatter of denials are flying around.  Crazy. 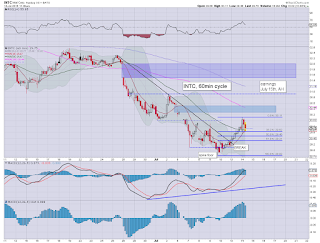 --
time for a cool drink
Posted by Permabear Doomster at 16:51:00
Email ThisBlogThis!Share to TwitterShare to FacebookShare to Pinterest

US equities are due a natural down cycle, having probably peaked at sp'2105.. and VIX 13.06. There is viable downside into early Wednesday - when the Yellen is due to appear, to the micro gap around sp'2080. Metals and Oil are under increasing pressure as the USD is battling to turn back positive. 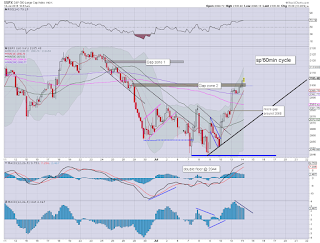 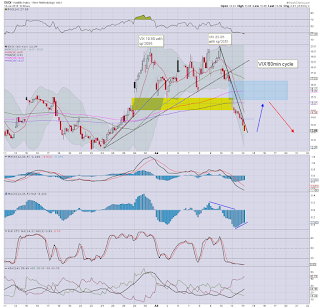 Well, it the usual turn time of 11am... considering the smaller 5/15/60min cycles, I'd be surprised if we don't start seeing some moderate weakness for the rest of today.

A mini washout tomorrow morning to around 2080 would be pretty natural.
--

*I have my eyes on INTC (earnings Wed' at the close)... I'd consider picking it up again.. if 29.50s.. or lower. There seems ZERO hurry though.. not least before the Yellen appears.
--

As a short trade.. overly risky.. to me at least.

Stock +5%.... not much.. considering.
Posted by Permabear Doomster at 15:51:00
Email ThisBlogThis!Share to TwitterShare to FacebookShare to Pinterest 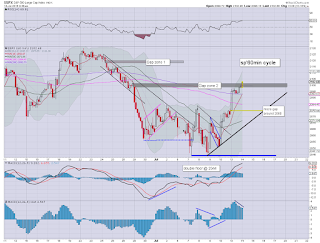 There remains threat of a wave lower to the 2085/80 zone... but regardless of that.. market still looks headed broadly higher into early August.
--

notable weakness, airlines, DAL/UAL, both lower by around -1.6%
-

Seeking a broad market ceiling around 11am.. and then weakness into the 2pm hour.
- 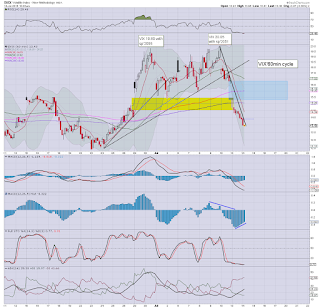 With Yellen tomorrow morning... market could use it as an excuse to shake out the weaker bulls.
-

From a pure cycle perspective, market looks vulnerable.. at least into this afternoon. That micro gap around 2080 would match up with VIX in the mid/upper 15s.. .tomorrow morning.


10.30am. At the current rate of decline, the VIX will hit zero in 5-6 days. Clearly that ain't happening...  and it does look like a short term equity peak is due.

Equity bull maniacs getting a rather natural time to exit... with some stocks having maxed out almost an hour ago.. notably.. INTC.
Posted by Permabear Doomster at 14:48:00
Email ThisBlogThis!Share to TwitterShare to FacebookShare to Pinterest 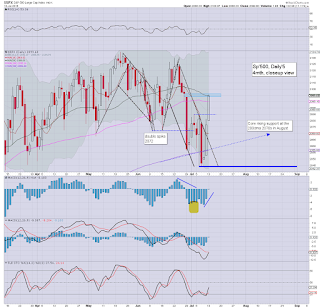 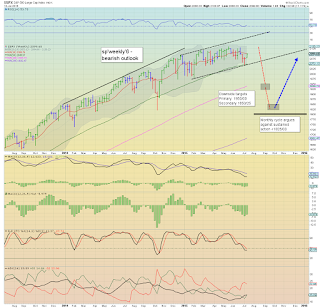 *with a bearish outlook from mid Aug-early Oct', I will be highlighting weekly'6 across the next few months.
--

JPM +0.7%, after better than expected Q2 earnings.. although the financials are still struggling to increase revenue. They need higher int' rates!
-

Have a good Tuesday

USD weakening... -0.5% in the DXY 96.30s.
Posted by Permabear Doomster at 12:53:00
Email ThisBlogThis!Share to TwitterShare to FacebookShare to Pinterest

Eyes on the VIX

With equities closing higher for a second consecutive day, the VIX was naturally whacked lower. Based on many previous cycles, 2-3 weeks of a subdued VIX appear likely. By mid August though, there will be a very high threat of a renewed.. and particularly powerful surge in market volatility. 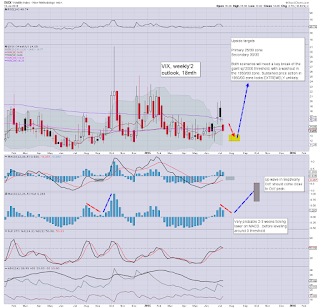 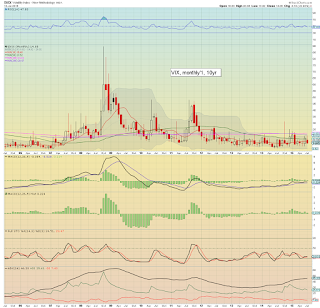 *note the upper bollinger on the giant monthly cycle - currently around the key 20 threshold.. where the VIX got stuck last Thursday.
--

Suffice to say, I am expecting the VIX to see some sustained action in the 20s in the late summer/early Autumn. Whether we briefly break into the 30s... difficult to say.

For now.. I am content to watch VIX.. but will likely pick up some Sept/Oct option calls in early August.

*fed official George will speak.. but that is not until after the close.
--

US equities closed significantly higher, sp +22pts @ 2099. The two leaders - Trans/R2K, both settled higher by 1.1%. Near term outlook offers moderate threat of downside to 2085/80... but regardless of any Tues/Wed weakness, the broader trend looks bullish into early August. 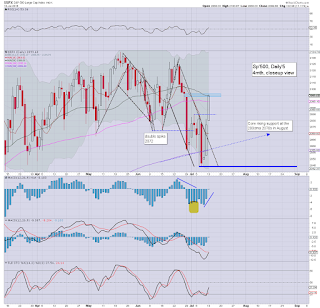 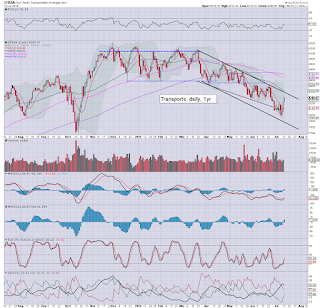 Suffice to say... market is battling upward from the double floor of sp'2044...  new historic highs (in some.. but not all indexes) look due into early August.

From there.. things should (in theory) get real interesting.
--