US indexes saw minor churn across much of the day, sp +2pts @ 1959. The two leaders - Trans/R2K, both settled higher by around 0.1%. Near term outlook remains bullish, with the 1970s viable early next week. Metals were exceptionally strong, Gold +$42, with Silver +4.6% 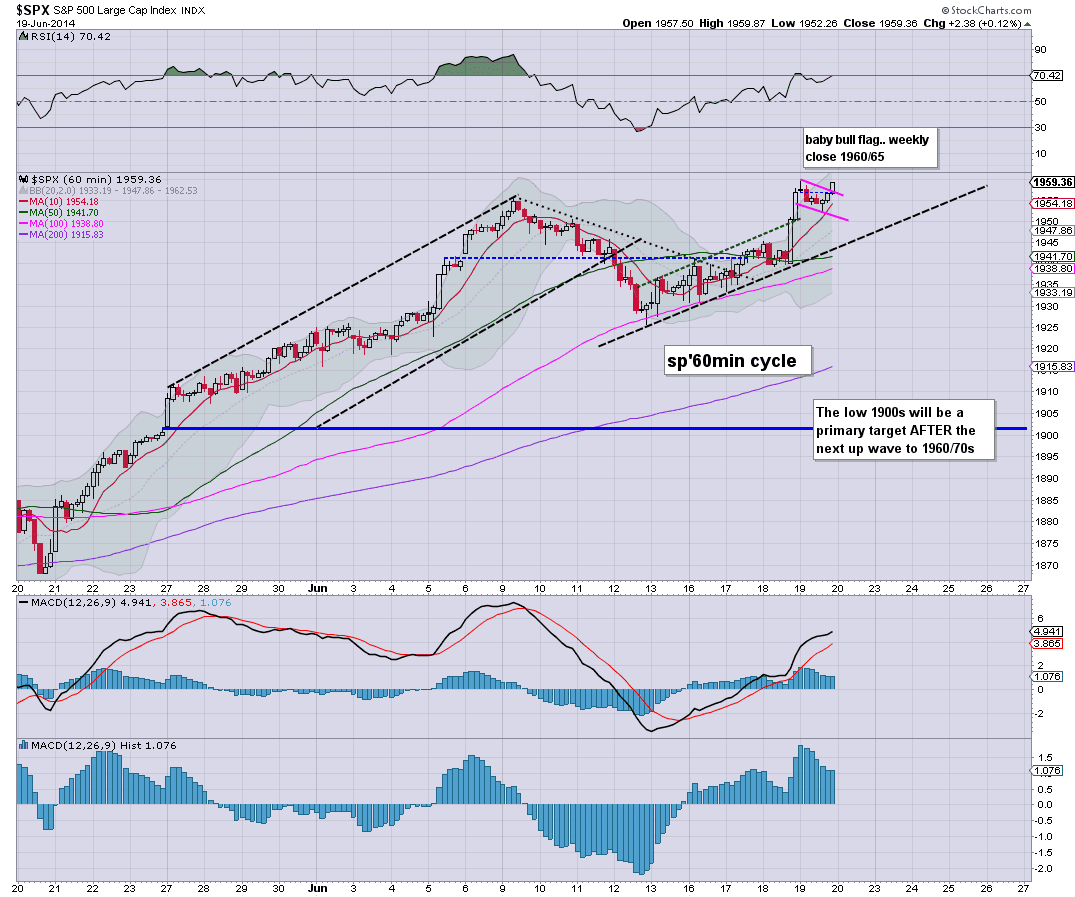 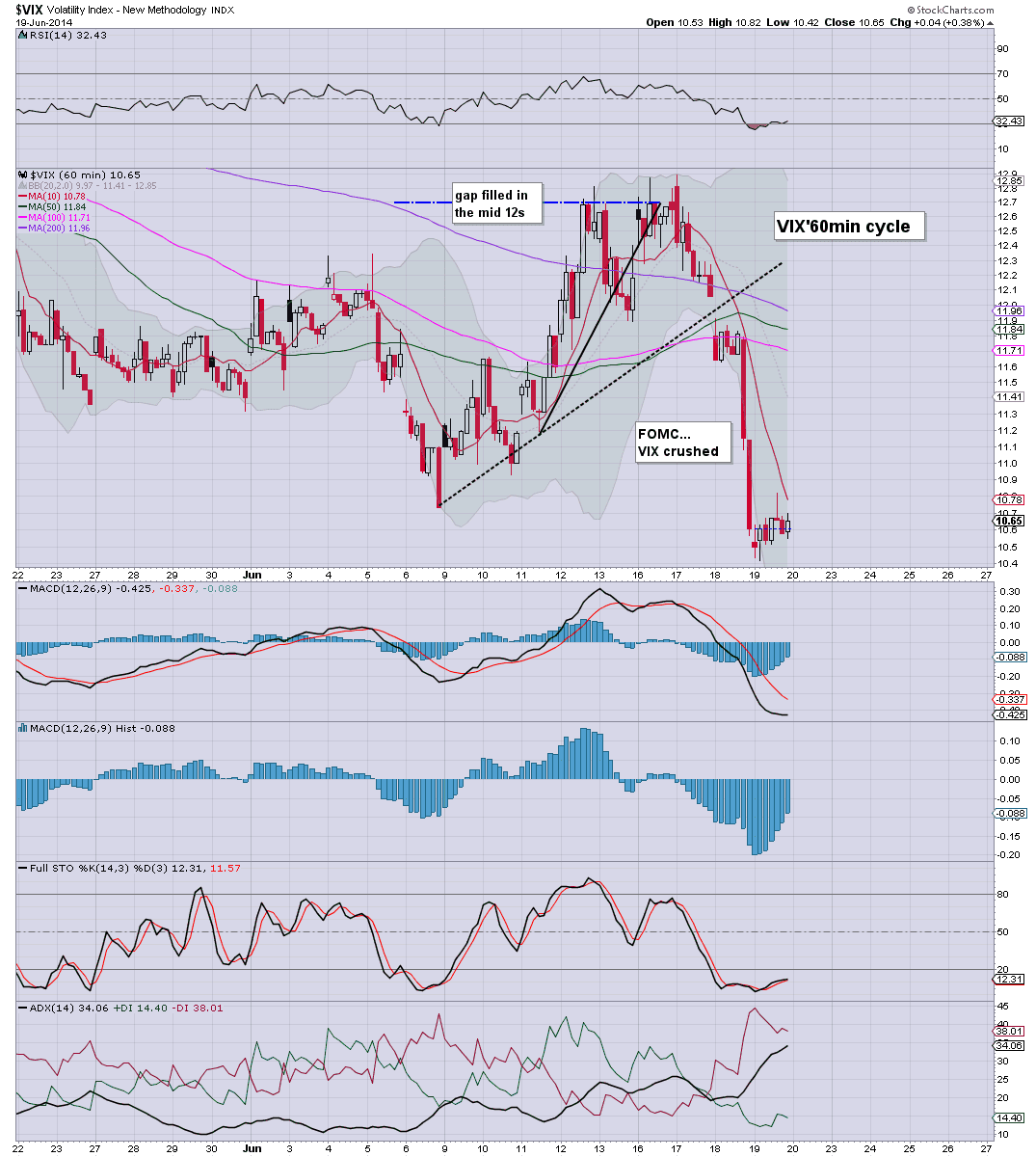 So...a new historic high for the sp'500, and the broader upward trend continues.

With quad-opex tomorrow, equity bears don't have anything to look forward to, and the weekly charts will end the week looking strong.

-
Uruguay look set to win against England...I am not surprised at yet another looming defeat.
--

*I hold just one long position overnight, WFM, am seeking the 42s, on a recovery bounce.
-

I will post a daily wrap later at 8pm EST.
Posted by Permabear Doomster at 21:03:00
Email ThisBlogThis!Share to TwitterShare to FacebookShare to Pinterest

US equities continue to see minor churn. Price structure is a baby bull flag, which will be offering the sp'1960/65 zone tomorrow. Any weekly close above 1945 will keep the weekly cycles on outright bullish. Notable very strong gains in the metals and the miners. 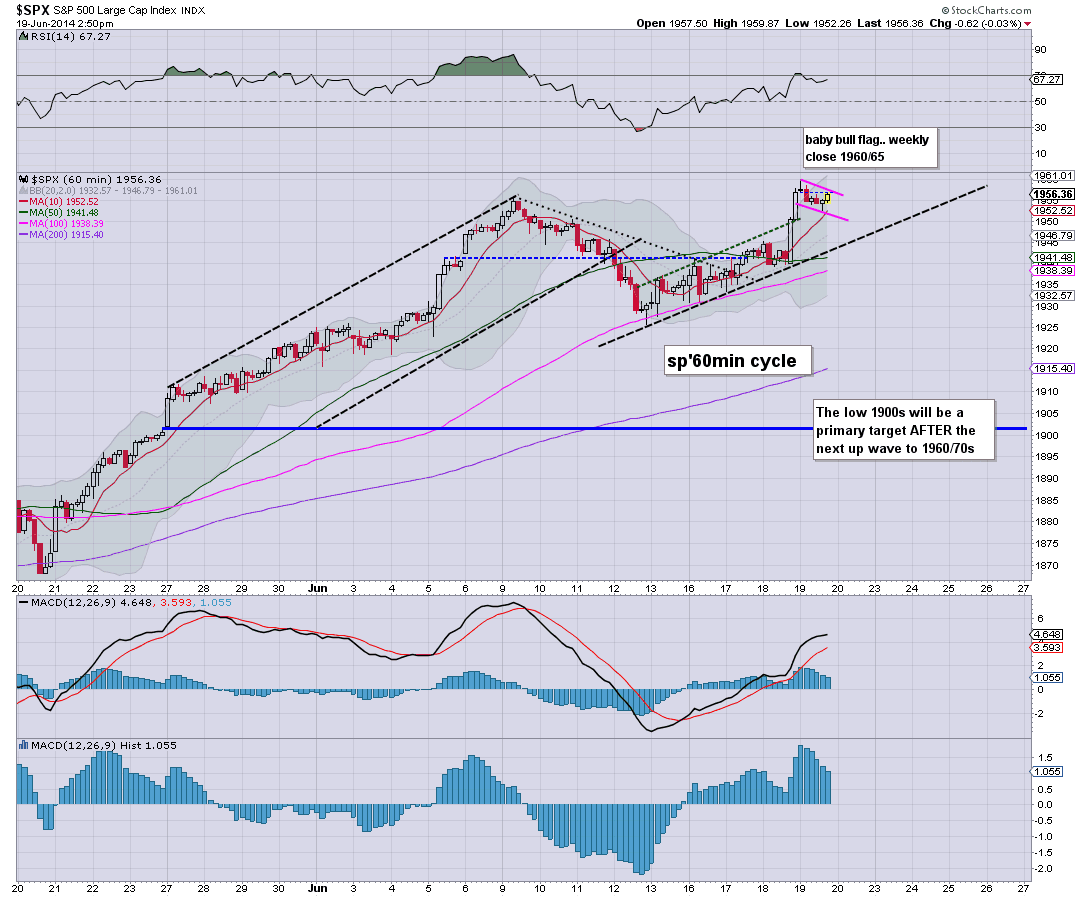 --
*I will hold WFM (long) overnight. There remains threat of a brief foray into the 39s, which would make for a full back test of the original breakout. The 42s don't seem that bold a target.. within the next 1-3 trading days.
-

3.48pm.. possible micro double top on the indexes, but anyway....quad-opex tomorrow...chop..but no sig' down wave.

back at the close.
Posted by Permabear Doomster at 19:51:00
Email ThisBlogThis!Share to TwitterShare to FacebookShare to Pinterest

US indexes have seen a minor down wave from sp'1959 to 1952. Price structure remains bullish into the quad-opex Friday close. Metals are holding strong gains, Gold +$37, with Silver +4.6%. VIX remains crushed..a touch higher in the 10s. 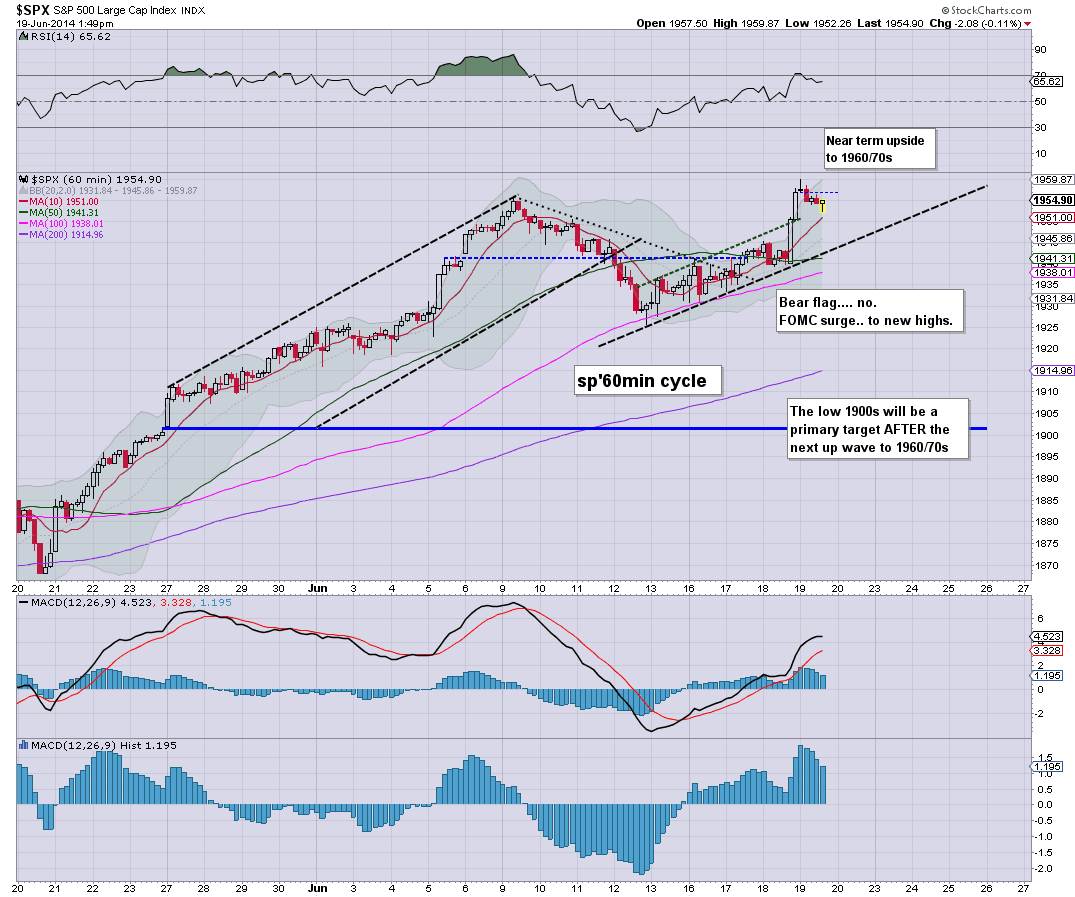 *I was stopped out of CHK. After some consideration - and based on my original outlook, I picked up a secondary WFM block from $40.44, still seeking much higher levels into July.
--

So..a minor down wave..and probably much of the same churn in the remaining two hours of the day.
-

The big England vs Uruguay game is coming up..and my entire nation will be moving to DEFCON 1 status. 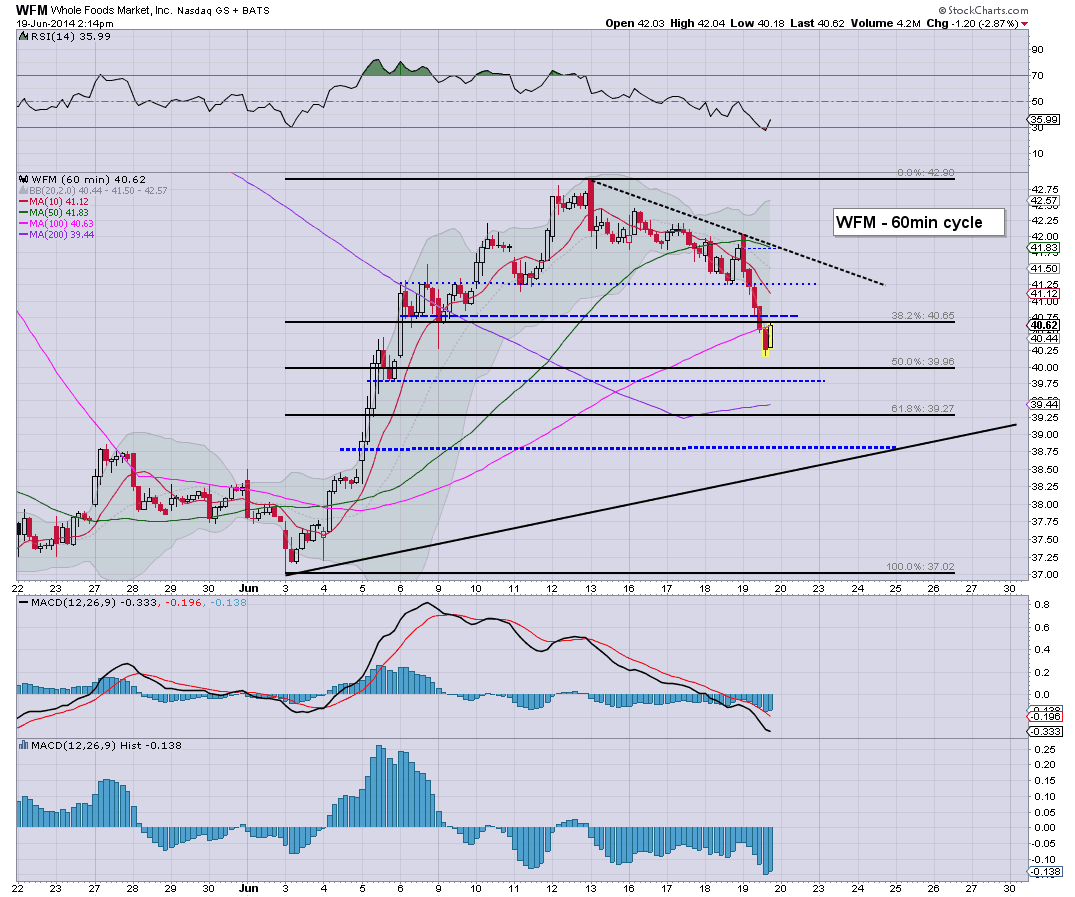 1pm update - strong gains for the metals and miners

US indexes are slightly lower, cooling from a new sp'500 high of 1959. A further small up wave looks highly probable into quad-opex, which will offer a powerful weekly close in the 1960s. Metals remain strong - with clean breaks on the daily, Gold +$38, with miner ETF, GDX +4.9% 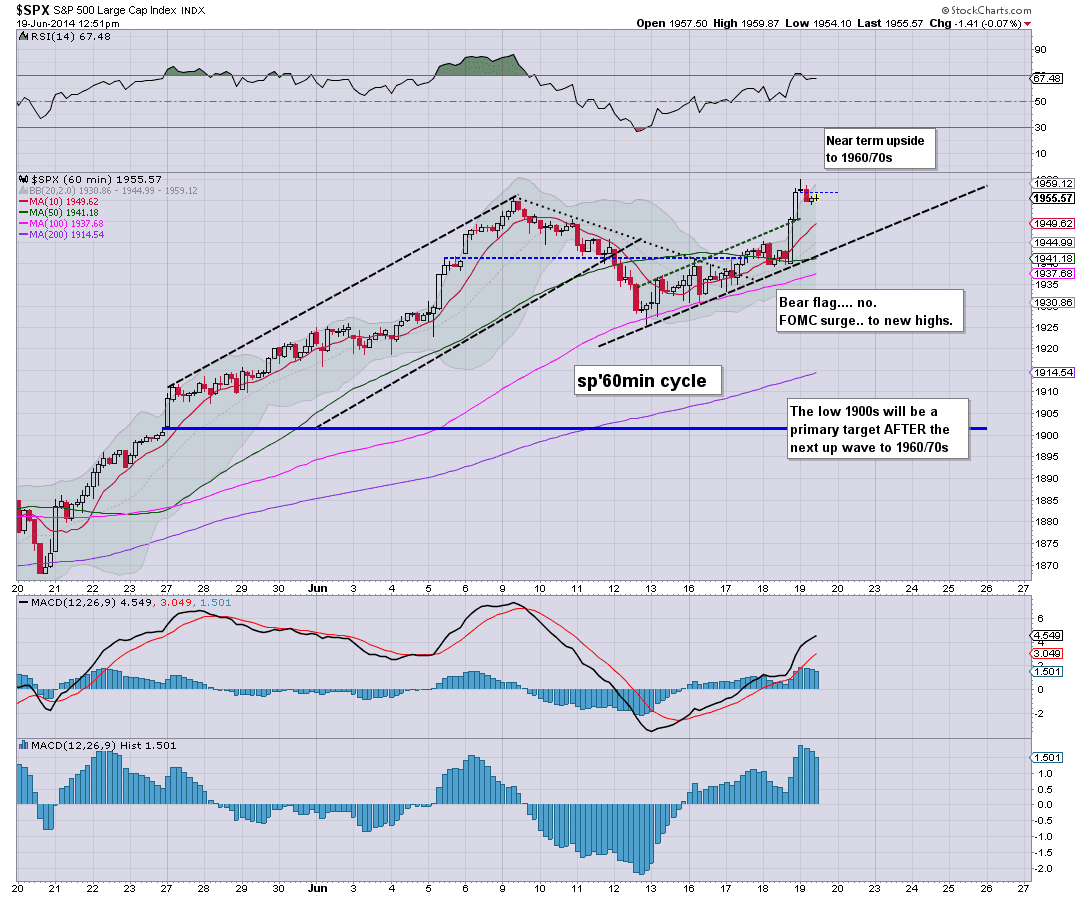 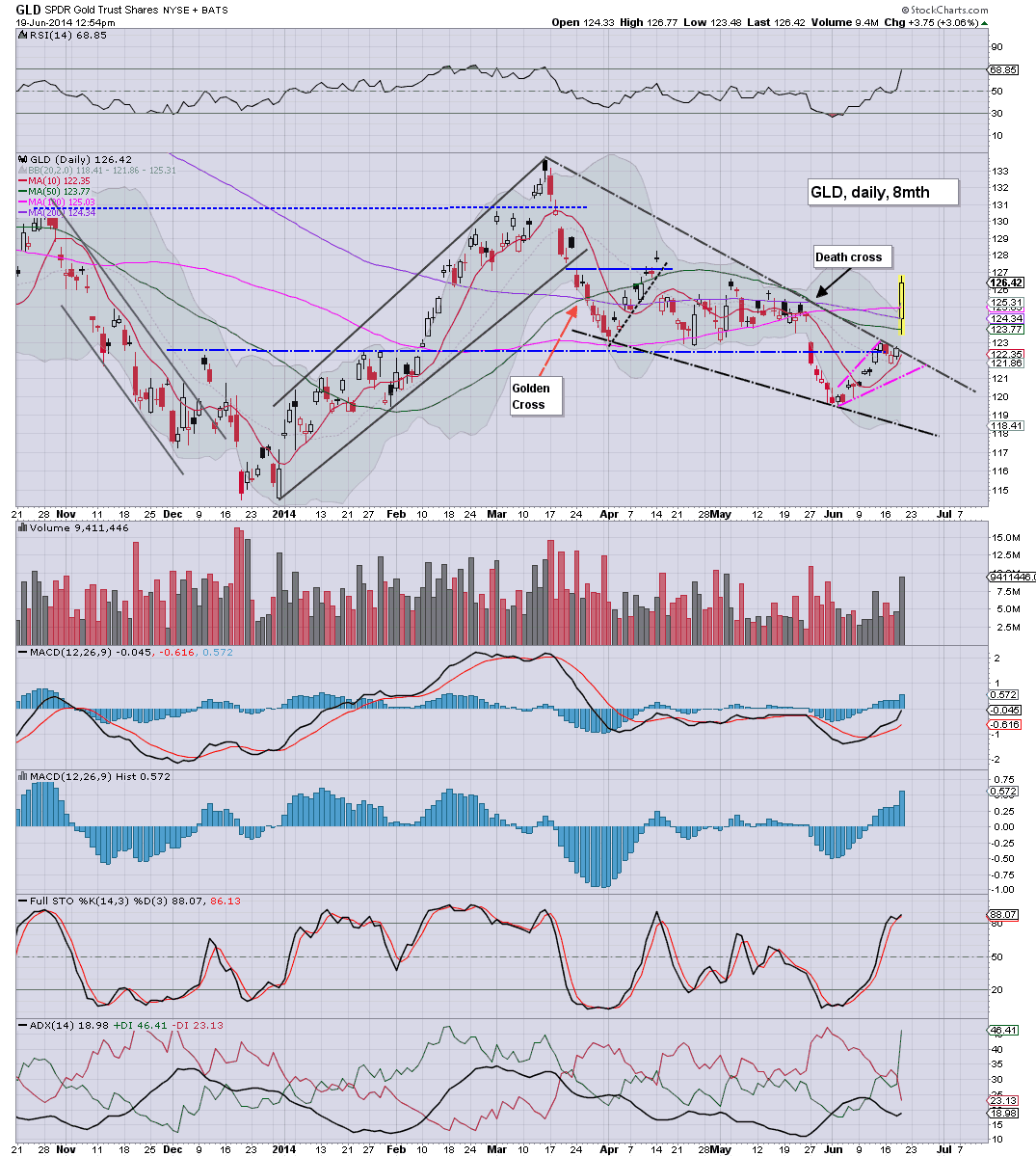 Suffice to say.... well done to those long the metals/miners. Looks to be some considerable further upside.
--

1.45pm.. picked up a secondary WFM block.. from 40.44.
Posted by Permabear Doomster at 17:55:00
Email ThisBlogThis!Share to TwitterShare to FacebookShare to Pinterest

US equities are seeing a minor down cycle, but a 'natural' one it is, and there will doubtless be renewed upside into the quad-opex Friday close. Notable strength in the metals, Gold +$23, with GDX building gains, +3.4%. VIX remains fractionally lower.. in the 10s. 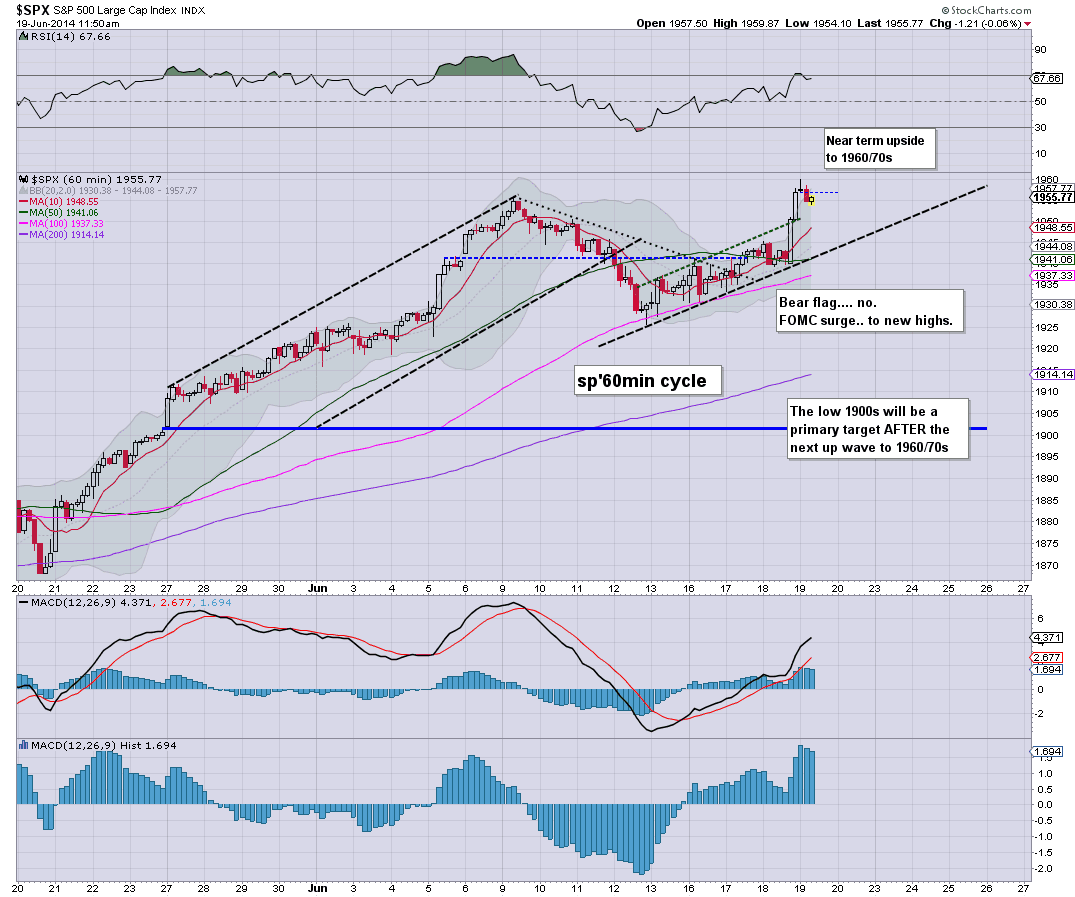 So..a minor down wave, and as ever, it remains a mere 'buying opportunity'.
--


Meanwhile, yours truly is getting his ass kicked in WFM... 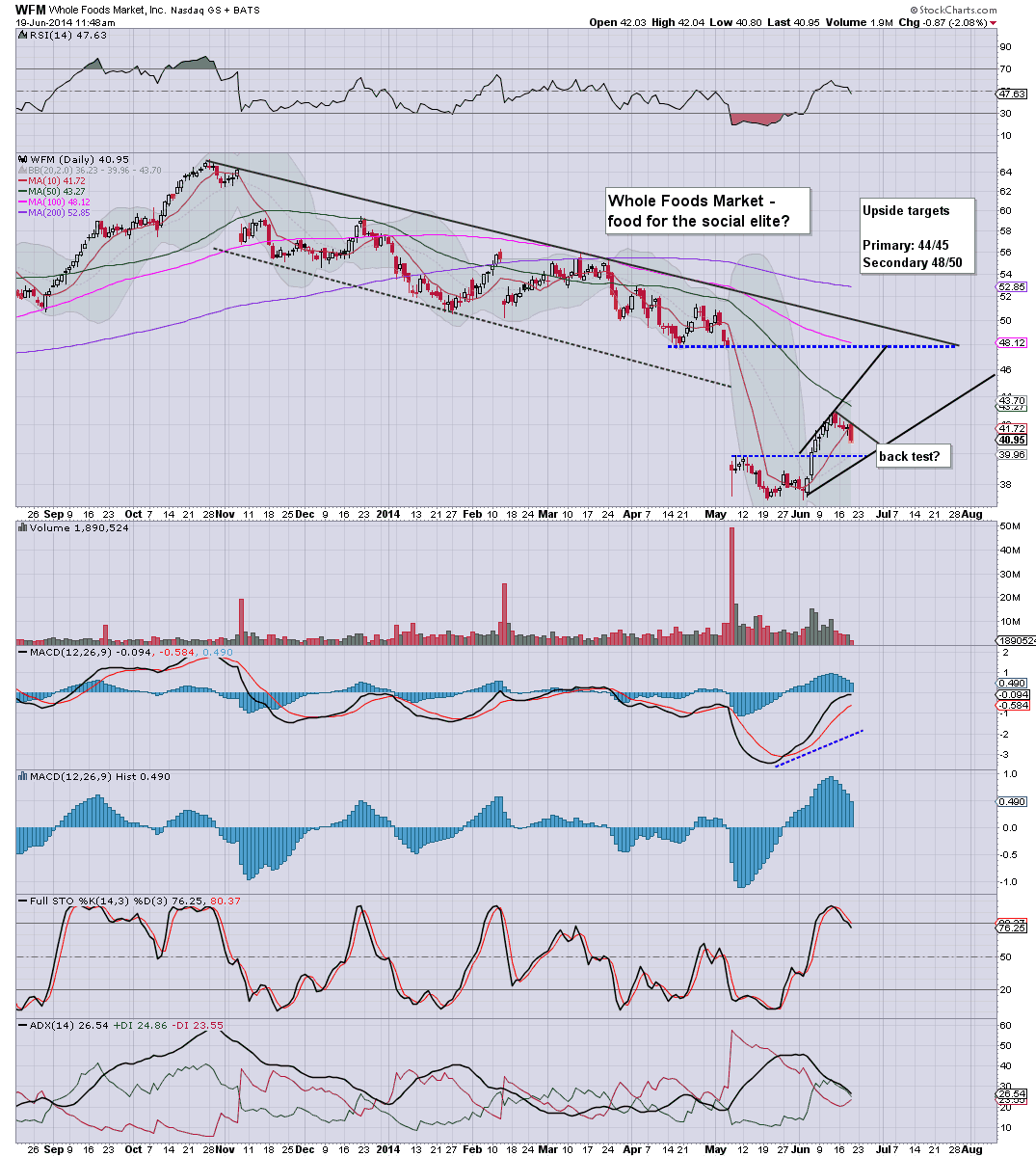 Worse case would appear to be a viable back test in the $40/39 zone. I'm still 'moderately confident' of a subsequent ramp to $48/50 by mid July.

time for Columbia vs Ivory Coast.... and some lunch
Posted by Permabear Doomster at 16:51:00
Email ThisBlogThis!Share to TwitterShare to FacebookShare to Pinterest

Equities are seeing moderate chop, although it is notable that there is next to zero downside power, and market will likely melt higher into the Friday close. Metals are holding strong gains, Gold +$20, with the miner ETF of GDX, +2.7%. 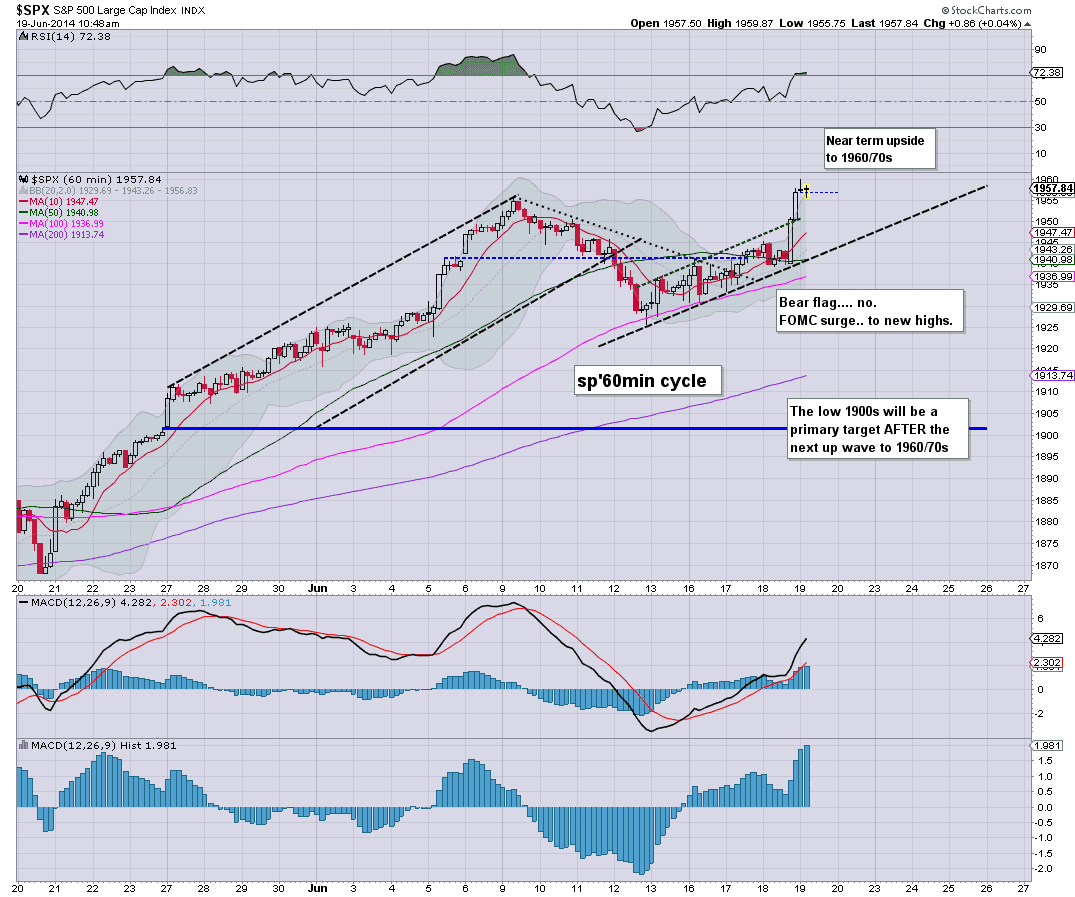 What little sell side volume there is... negated by today's sig' QE.

back at 12pm
Posted by Permabear Doomster at 15:50:00
Email ThisBlogThis!Share to TwitterShare to FacebookShare to Pinterest

US equities continue to push higher, with new highs for the sp'500 and NYSE Composite. The metals are strong, Gold +$18, which is helping the miners - the ETF of GDX +2.4%. VIX is melting lower, and the 9s are viable by the Friday close. 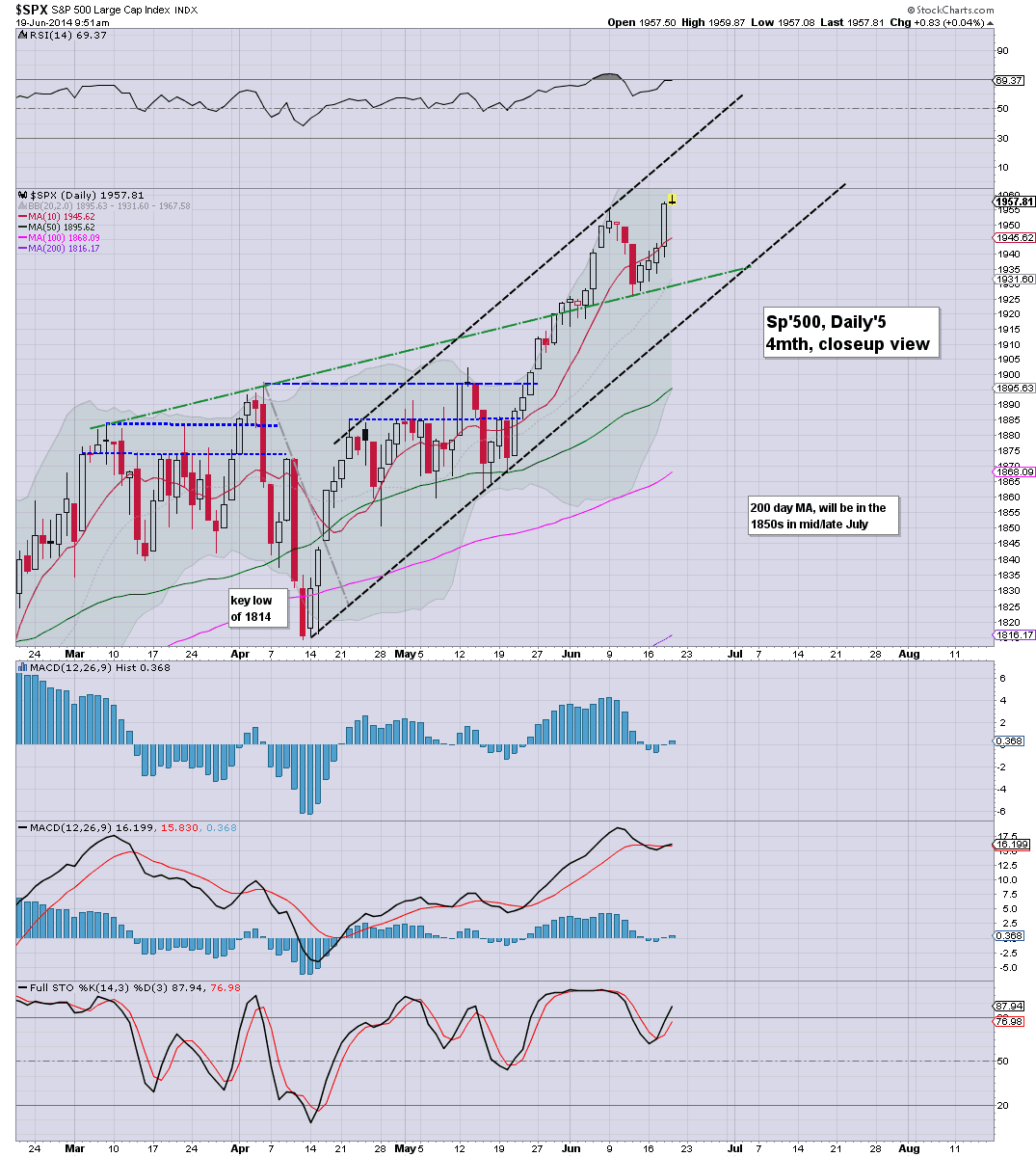 Suffice to say, we're still pushing upward, and no doubt, this mornings sig' QE is going to help negate whatever minor sell side volume there is.

Daily charts will be offering 1970 tomorrow, but weekly charts remain restrictive to the upper 1950s this week.

For the bulls, its probably a case of churn sideways across the two days.

-
I am having a lousy start, both CHK and WFM are getting knocked lower, and time is running out for WFM, before the next equity down wave next week. Its not looking good.
-
Posted by Permabear Doomster at 14:53:00
Email ThisBlogThis!Share to TwitterShare to FacebookShare to Pinterest

Good morning. Futures are a touch higher, sp 1pt, we're set to open around 1957. The sp'1960s look highly likely this morning. With sig' QE of $2-3bn the equity bulls have everything in their favour, into tomorrow's quad-opex. Metals are strong, Gold +$12. 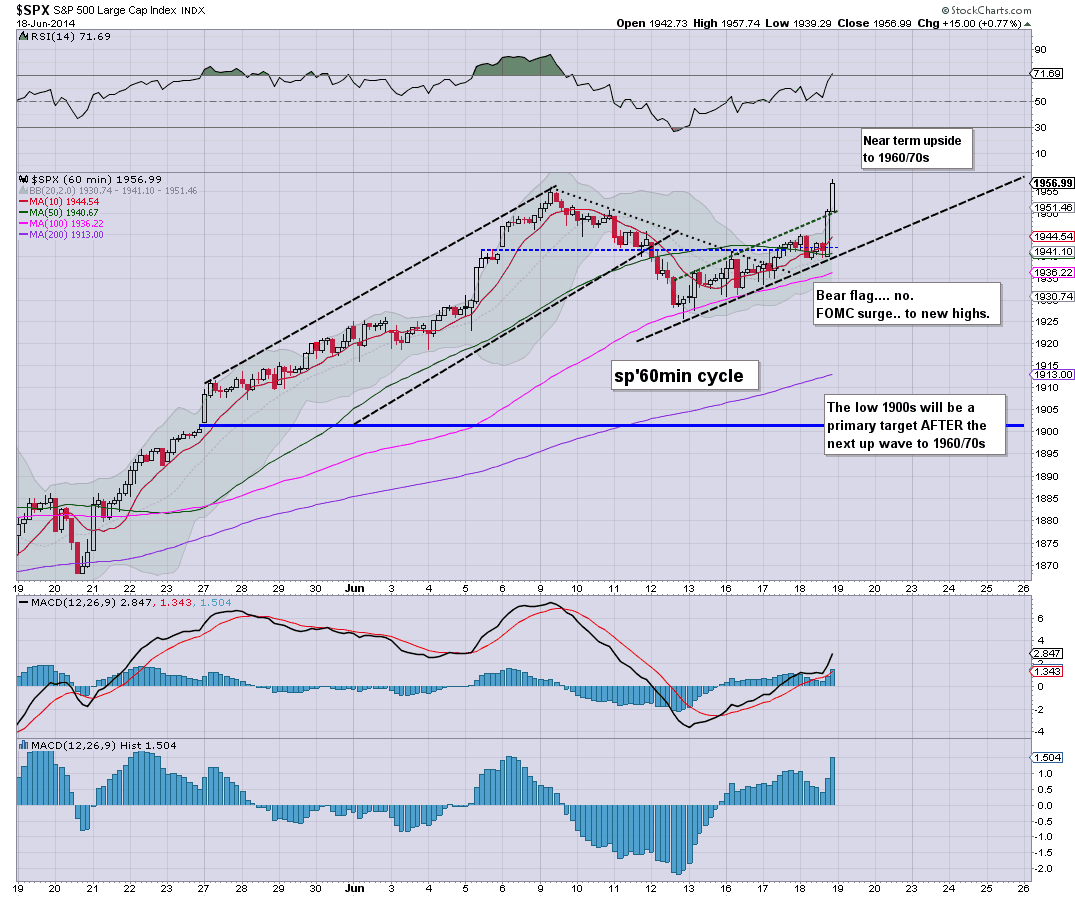 So...post Fed day, and indexes are set to climb a little higher. There may well be a minor down cycle later in the day, not that it will matter.

With precious metals on the rise, the miner ETF of GDX is already +1.5%
--

Naturally Oscar is bullish, but then...so am I..at least for a few more days.
--

*as for me...I will merely be seeking to offload CHK and WFM into the Friday close...hopefully one, or both will rally somewhat in the remainder of the week.

Good wishes for Thursday trading.
Posted by Permabear Doomster at 13:25:00
Email ThisBlogThis!Share to TwitterShare to FacebookShare to Pinterest

US indexes saw churn for much of the day, but with the market coping with the FOMC, the main indexes rallied. The sp'500 broke a new historic high of 1957, and looks set for the 1960/70s in the near term. The VIX reflects a market that has no concerns about anything... least of all... Iraq. 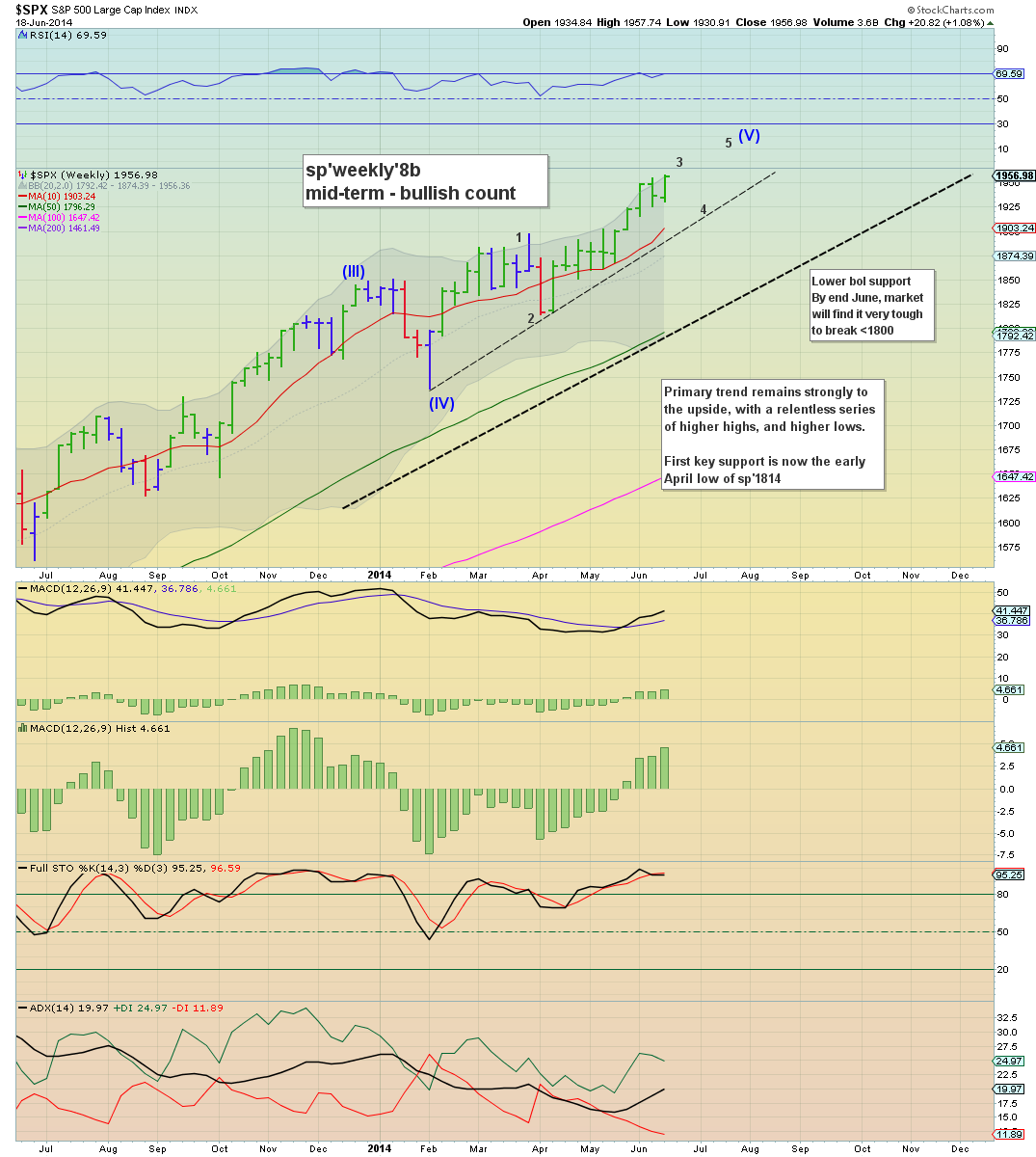 The weekly 'rainbow' chart looks really strong with the sp' back in the 1950s. Equity bulls should be content with any weekly close above 1945, which will keep the current candle...green :)

As for the wave count, I'd still guess we're in blue'3.... and have a fair chance of a down wave from 1960/70...to maybe 1920/00. As things are, I'd be very reluctant to attempt to play such a wave... overly risky, whilst the broader trend remains so strong. Instead, I'd merely look to go long for a final wave higher into July. 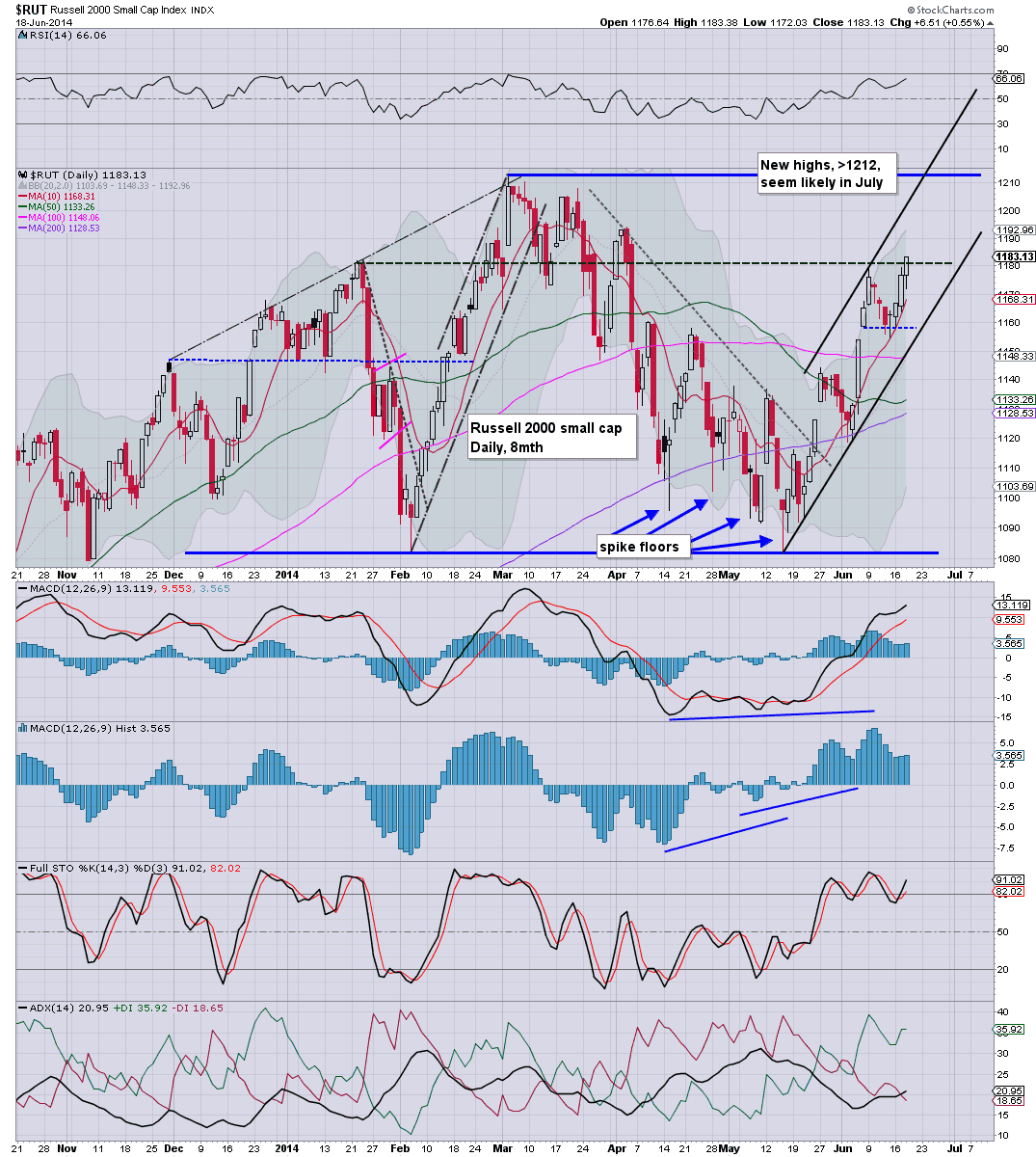 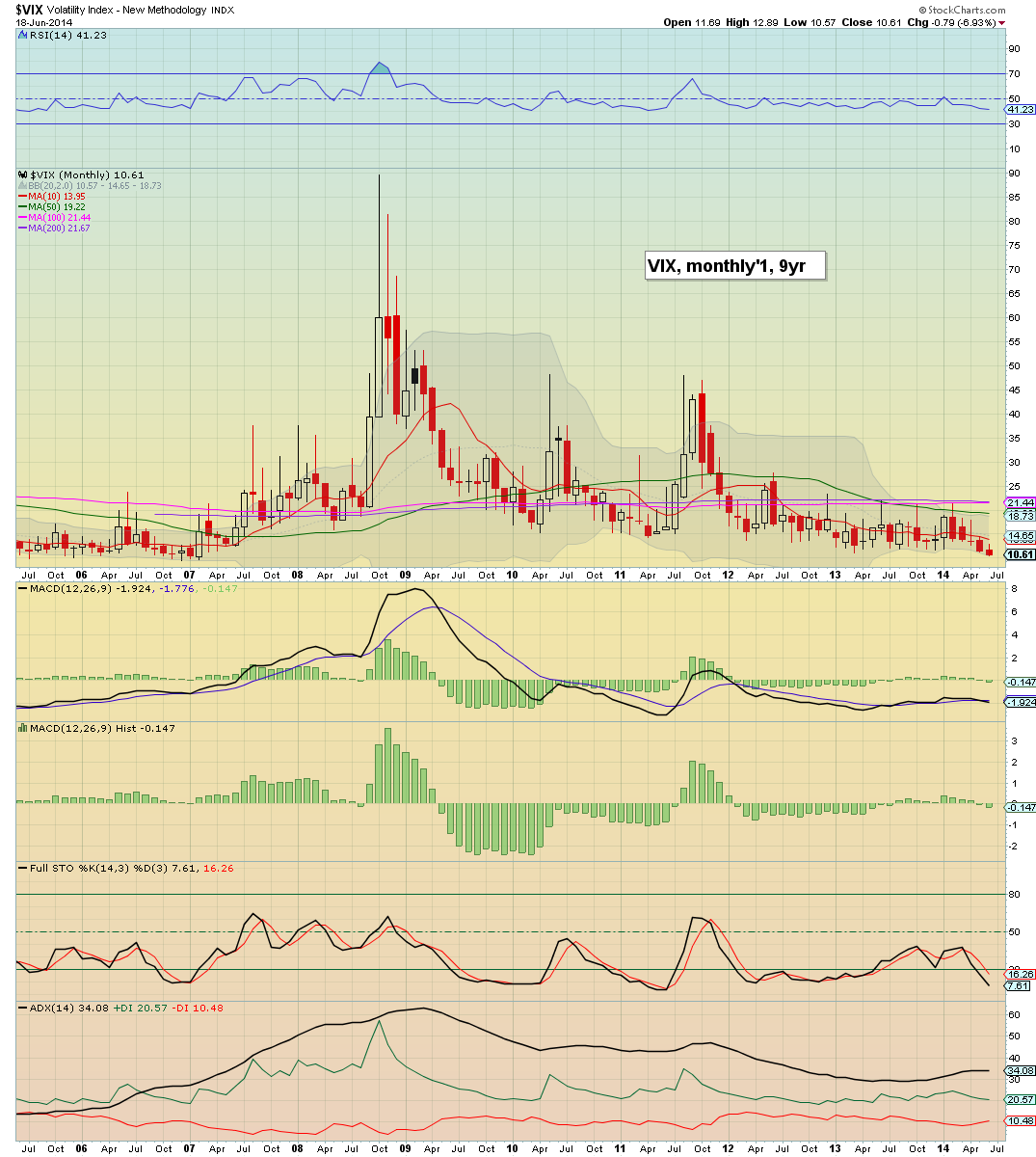 The VIX is at levels not seen since Feb' 2007..and on any basis, this is a market that is utterly fearless. Even the mid teens look out of range in the near term, and I no longer expect the VIX 20 threshold to be tested until late July at the earliest.

Thursday will see the usual jobs data, phil' fed, and leading indicators. That will be plenty enough to give the market a nudge in the morning.

So...all that talk of 'ohh, its a bear flag..don't you see it?'...amounted to nothing..and indeed, we even saw new historic highs today. I almost wish I was wrong, but hell, the price action since early last week did not have ANY sig' downside power to it.

Until the bears can show some real power - which would be reflected in a VIX in the upper teens (if not the 20s), I can't take ANY downside seriously.

My broader outlook remains offering a sig' multi-month down wave beginning later this summer, but as ever...until I see some downside power... I will be very cautious about shorting the market.

*having exited my index-long block, I'm now merely seeking to drop CHK and WFM into the Friday close... if prices are 'reasonable'.