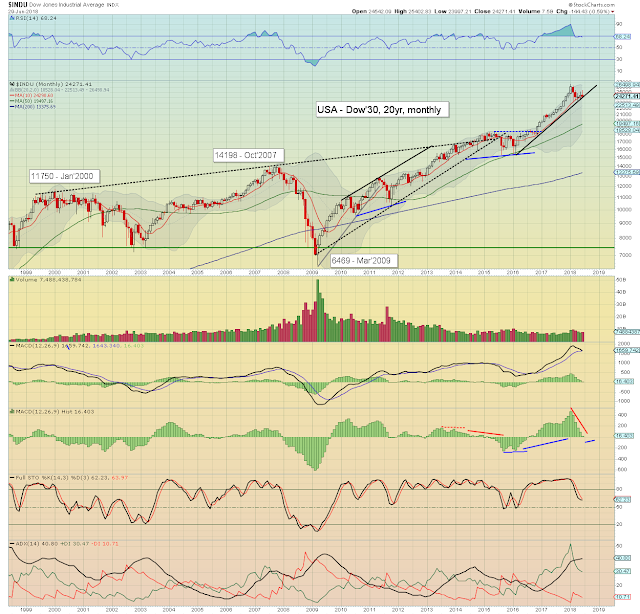 The mighty Dow settled -144pts (0.6%) to 24271. This was fractionally below the key 10MA, the first such close since Feb'2016. Underlying macd (green bar histogram) ticked lower for a fifth consecutive month, and is set to turn negative at next Monday's July 2nd open.

It remains the case the econ-data and corp' earnings continue to come in broadly fine. Industrials are largely being held back on trade/tariff concerns, and for now, I'm very dismissive of this mainstream concern.

Can the Dow break a new historic high (>26616) by late summer/early autumn? Yes, and keep in mind, the Nasdaq comp' and R2K both broke new highs in June. The rest of the US indexes can be expected to follow... eventually.
-- 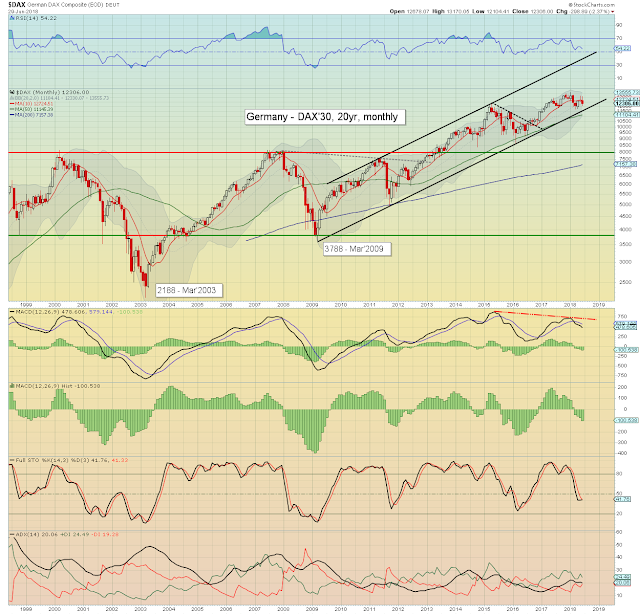 The economic powerhouse of the EU - Germany, saw the DAX fall for a second month, -298pts (2.4%) to 12306. Note the June settlement under the key 10MA, which leans bearish for July. Core rising support from the 2009 low will stand around 11700 in July. Any price action in the 11600s would merit alarm bells, and threaten powerful downside to core support of 8000. 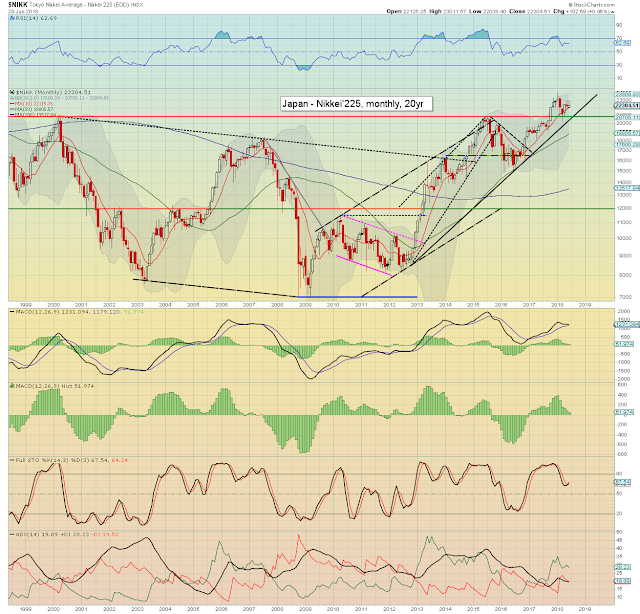 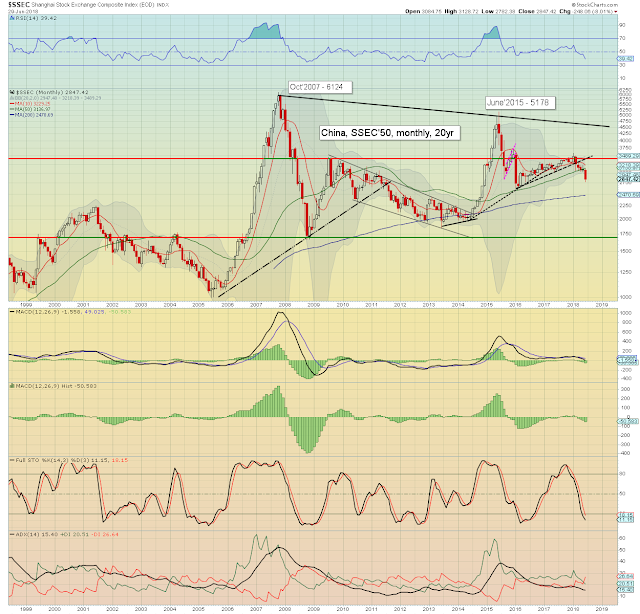 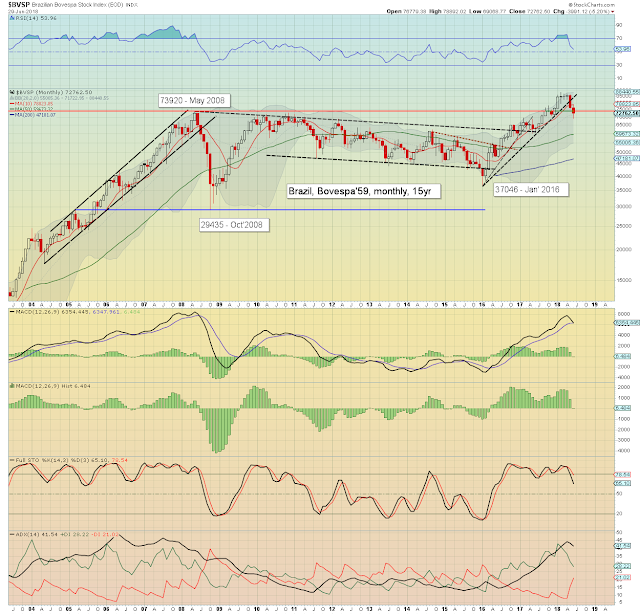 The Brazilian equity market significantly declined for a second month, -3991pts (5.2%) to 72762. The June settlement is back under the key price threshold. MACD cycle will turn negative at the July 2nd open, and leans bearish for July. Next big supports are 65000, and then 55000. 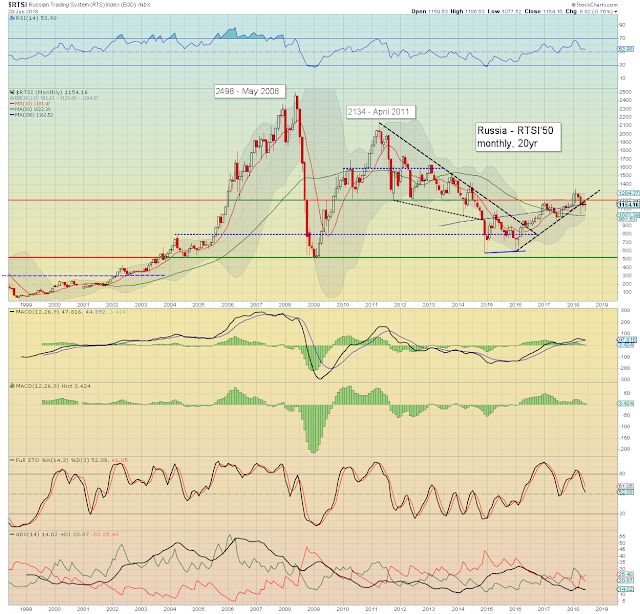 Russian equities continue to struggle this year, with the RTSI -8pts (0.8%) to 1154. There is big resistance at 1200, and until that is cleared, Russian equities can be seen as weak. MACD cycle is set to turn bearish at the July 2nd open. 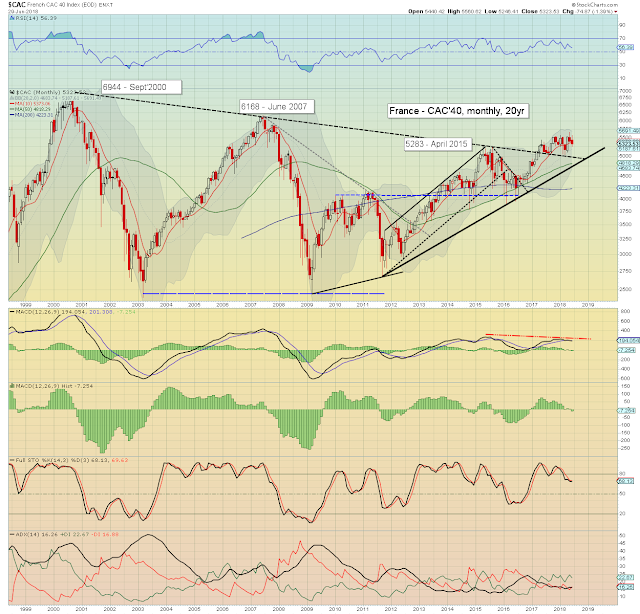 French equities cooled for a second month, -74pts (1.4%) at 5323. MACD cycle settled the month fractionally negative, and leans bearish for early July. Next support is the big 5K threshold, and that is some 6% lower. 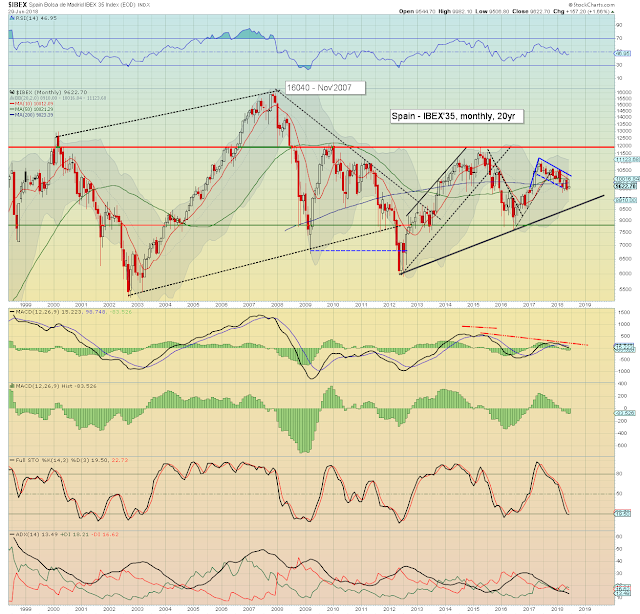 Spanish equities remain choppy, with the IBEX settling +157pts (1.7%) to 9622. S/t outlook is for further chop. When the next major EU down turn occurs, Spain will be particularly hard hit. Further, the 'Catalonia situation' hasn't been resolved... its merely been temporarily quelled. 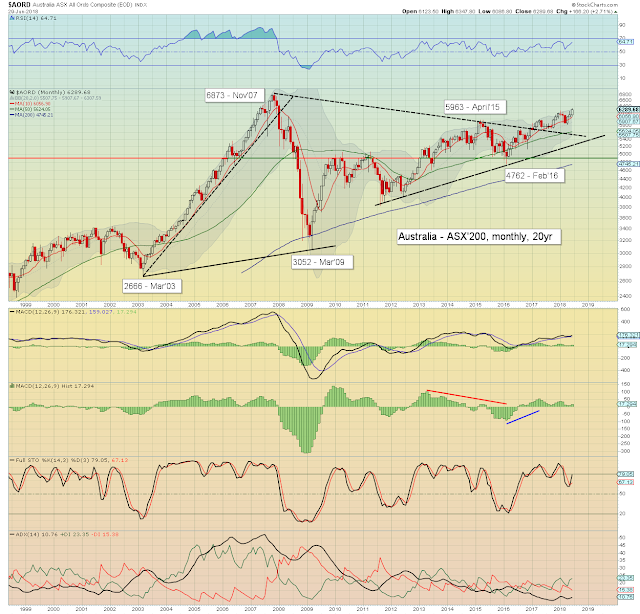 Australian equities climbed for a third month, +166pts (2.7%) to 6289. Outlook is bullish, with next target of the Nov'2007 historic high of 6873, which is 9.3% higher, and viable before year end. Higher commodity prices would really help this market. 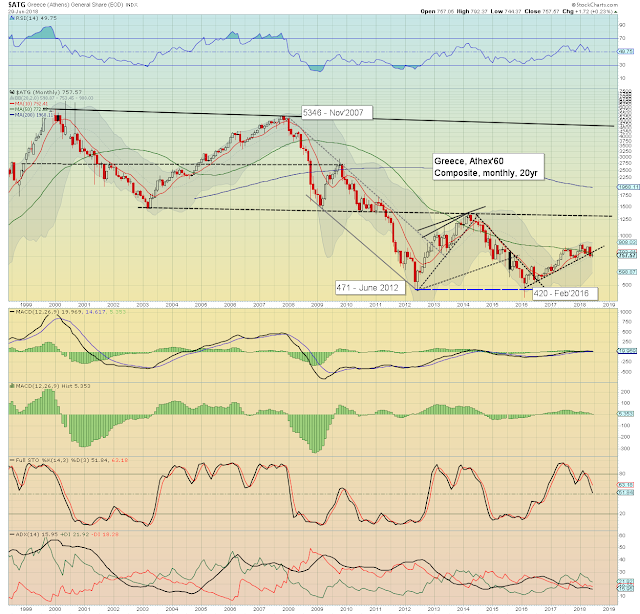 The economic basket case of the EU - Greece, saw the Athex settle +1.7pts (0.2%) to 757. S/t outlook is bearish, as price momentum is set to turn outright bearish in early July
--

China and Brazil are really struggling, with zero sign of a turn/floor, and have very significant technical 'open air' downside.

World leaders - USA and Germany, both saw settlements under their respective 10MAs, and it leans s/t bearish. For now, both are holding their m/t bullish trends.
--