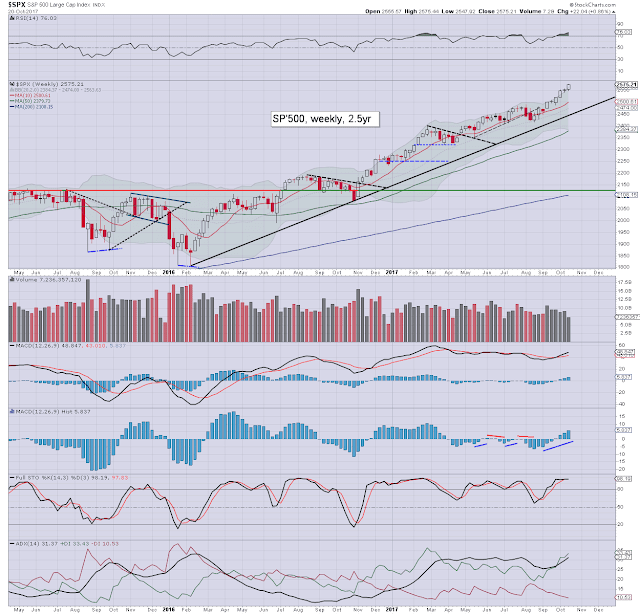 The sp' climbed for a sixth consecutive week, +22pts (0.9%), settling at a new historic high of 2575. This was the 8th gain of the past 9 weeks. Core support from the Feb'2016 low will be around 2450 next week, just a little below the 'technical necessity' gap zone of 2474/61. Underlying MACD (blue bar histogram) cycle is on the somewhat high side.

Best guess: short term cooling of 4% to the 2470/60s. Ironically, even that degree of downside would likely be enough to spook some of the weaker bulls. Broadly, the market looks strong into year end, with the target of 2683 just about within reach. It will clearly require almost everything to be fine, with a Dec' rate hike of 25bps (to inspire the financials), and WTIC around 54/55 (for energy stocks).

Equity bears have nothing to tout unless an Oct' monthly close under the monthly 10MA, currently at 2426. That number will jump around 35pts to the 2460s from Nov'1st onward, and be near the 2500 threshold across December. I do not anticipate such a bearish monthly close before year end.
-- 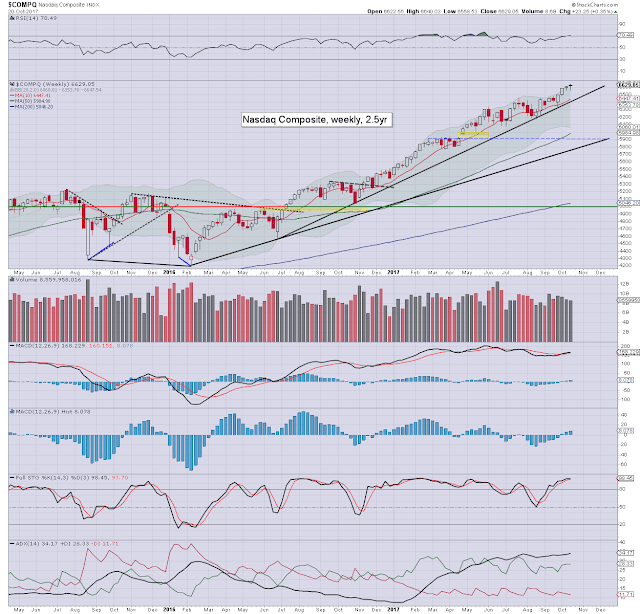 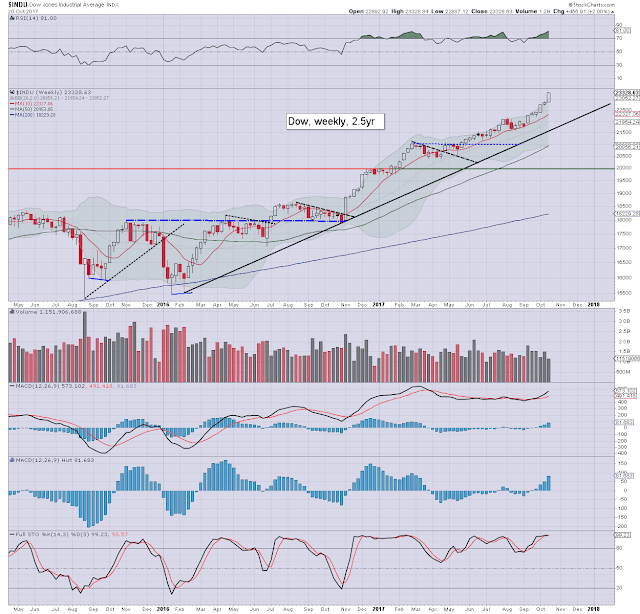 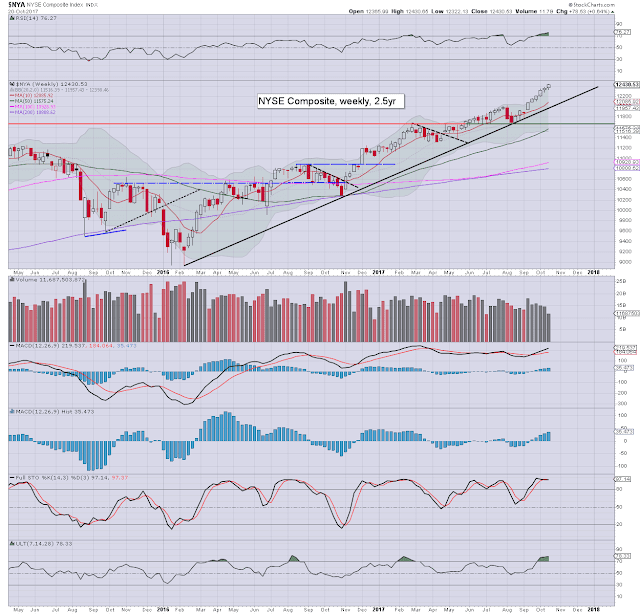 The master index climbed for a sixth week, settling +0.6% at a new historic high of 12430. First soft support is the 12k threshold, where first soft rising trend also is. Secondary support is in the 11600s, and that looks out of range for the rest of the year. 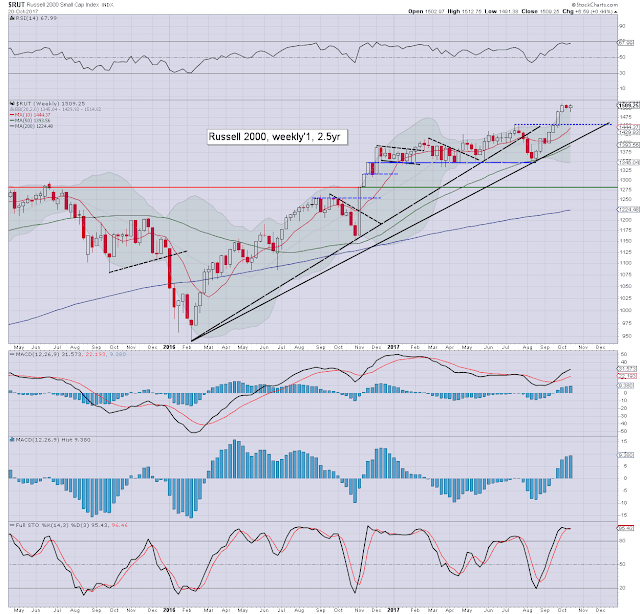 The second market leader - R2K, settled +0.4% at 1509. Underlying MACD cycle is on the very high side, and will be prone to rolling over into end month/early November. First soft support are the 1450s, with secondary (valid until mid Nov'), the 1430s. No price action <1400 can be expected. A year end close in the 1600s is just about technically possible. 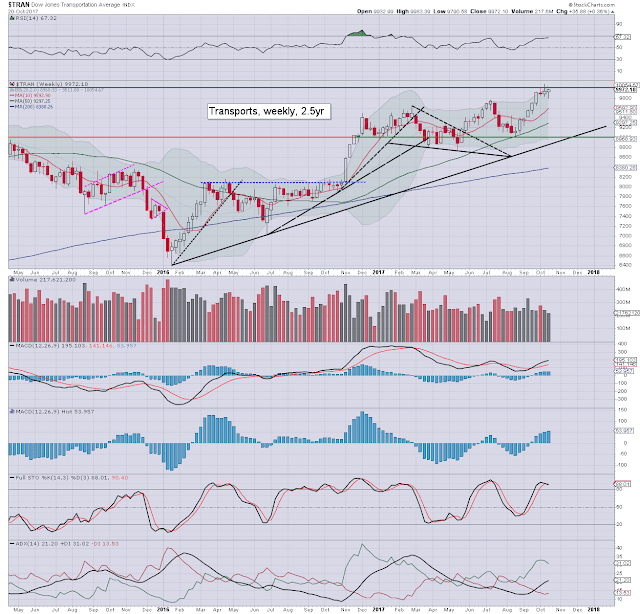 The 'old leader' - Transports, settled higher for a second week, +0.4% at 9972.The 10k threshold does offer some resistance. The tranny could cool by 5% to the 9400s and it would do nothing to negate the recent historic high. Broadly bullish, with a likely year end close >10250.
--

A bullish week for US equities, with 4 of the 6 indexes breaking new historic highs. The Trans/R2K are notably still a little laggy.

All US indexes have downside buffer of 4-5% before their core rising trends - from early 2016, would be tested.

Cyclically, there is near term threat of a cooling wave, but nothing more than 5%, before a likely whipsaw back upward into year end.
--

It will likely be the busiest week left of this year, with a truck load of corp' earnings. 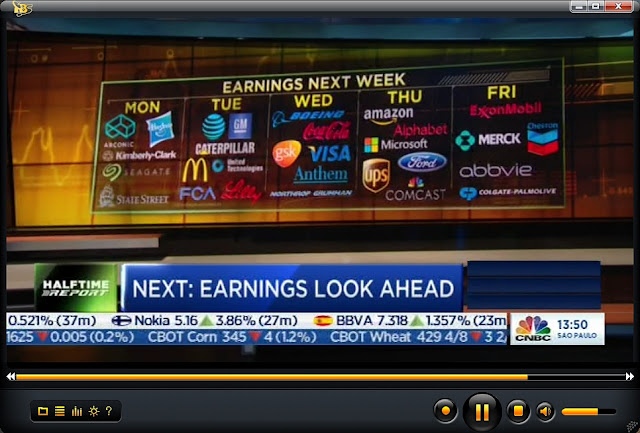 *the only fed official on the loose is Kashkari (Thursday), but it will be of no relevance, not least as it is during the usual 8 day blackout period ahead of the next FOMC of Nov'1st.
--

Or you could buy one share of Micron Tech' every 8-9 weeks.