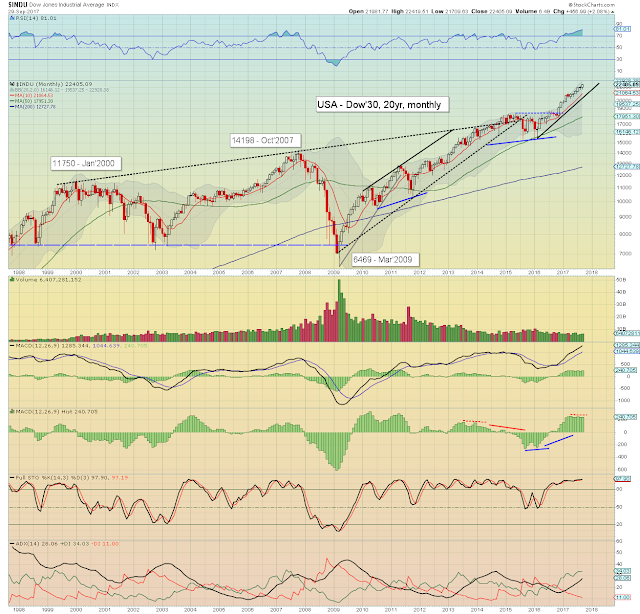 Best guess: near term cooling, but nothing more than 4-5%, and no bearish monthly closes under the key 10MA. A year end close in the 24000s is just about viable, which would give (hyper bullish) clarity for the next few years. 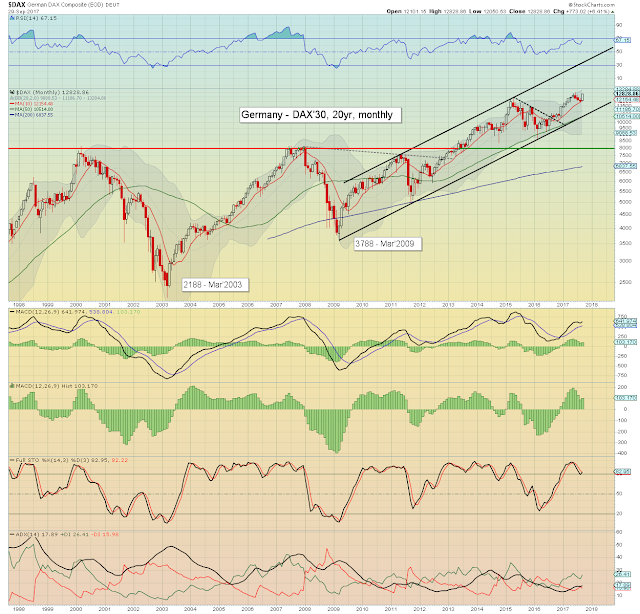 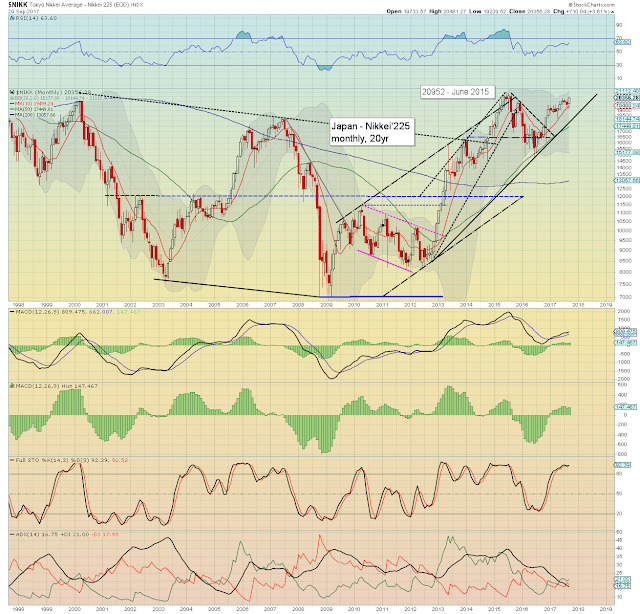 The Nikkei saw a month of swings, with an intra low of 19239, but then surging back upward to settle +3.6% at 20356, the highest close since July 2015. First soft target is the June 2015 high of 20952. A break into the 21000s looks a given. The only wild card is neighbouring North Korea. Clearly, there is a threat, but the default outlook has to be that nothing 'nightmarish' will happen. 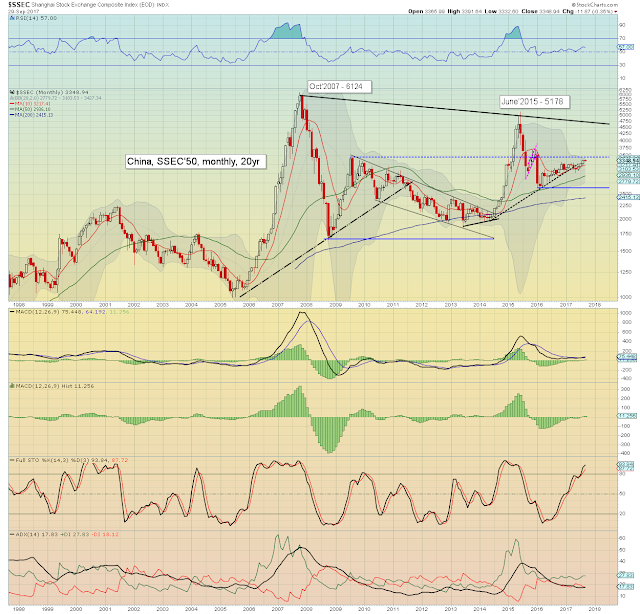 The Chinese market saw a month of moderate chop, settling -0.3% at 3348. There is considerable resistance within the 3400s. Any price action >3500 will offer 4500 by mid 2018. Only bearish if back under 3k, which the communist leadership will vehemently fight against, via the PBOC. 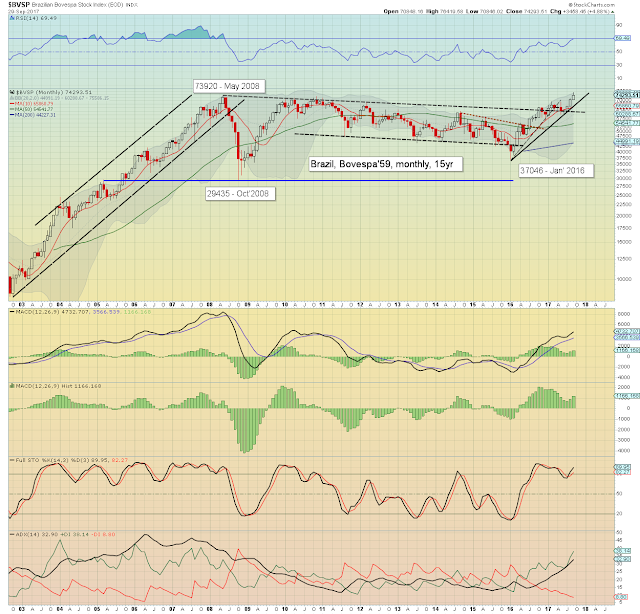 With commodities ticking upward, the Brazilian market climbed for a fourth consecutive month, +4.9% at 74293, with a notable new historic high of 76419. Indeed, with the break above the May 2008 high, the door is now open to vastly higher levels. Talk of 100k can begin. 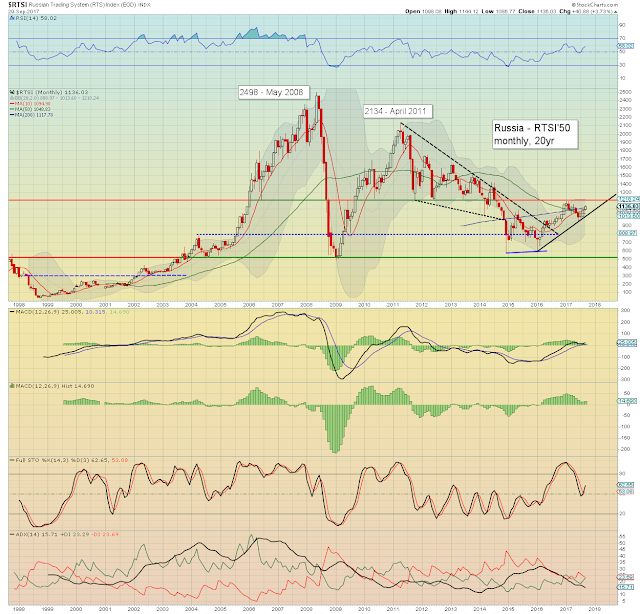 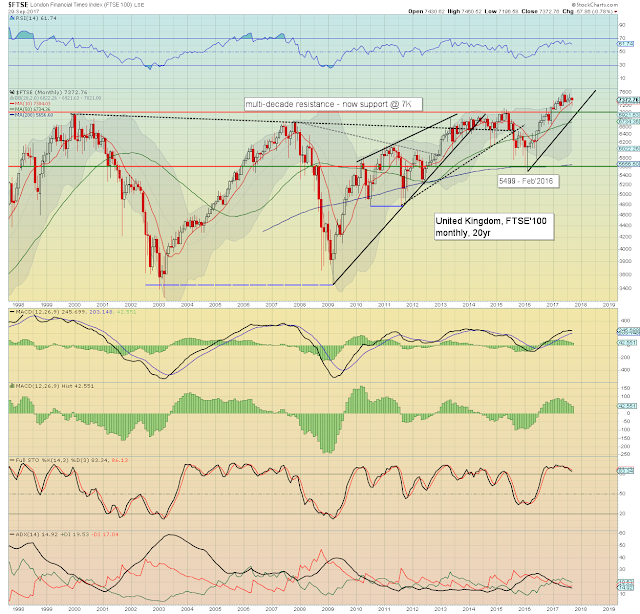 The UK market saw a choppy month, settling -0.8% at 7372. There was an intra month break of the 10ma, but the September close maintained the mid term upward trend from Feb'2016. Underlying MACD (green bar histogram) ticked lower for a fourth month, as price momentum continues to cool. The 7k threshold - old resistance... now support, is of paramount importance. So long as 7K holds, 8k by year end is viable, with a grander hyper-bullish target of 10k by end 2018. 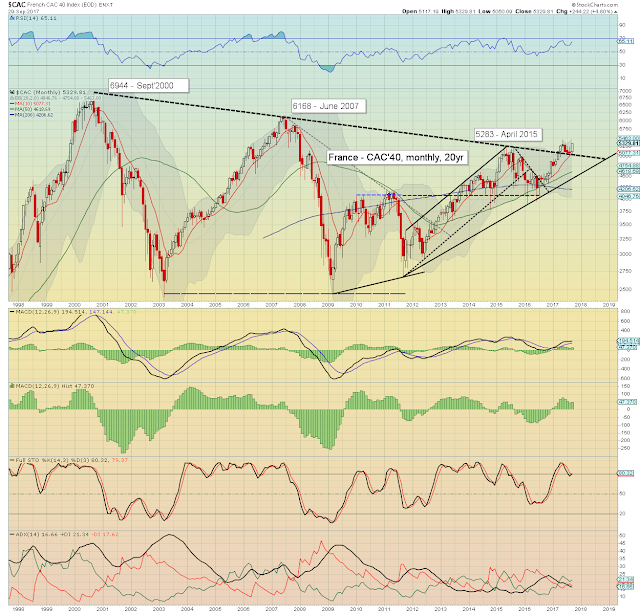 After three months of declines, the French equity market finally caught a bounce, settling +4.8% to 5329. Recent price structure of a baby bull flag - with a low around old declining trend/resistance, was confirmed with the best monthly gain since March. Next soft target is the June 2007 high of 6168. Grander upside to challenge the Sept'2000 historic high of 6944 seems due in 2018, and that is currently 30% higher. Only bearish if back under 5k, which seems extremely unlikely. 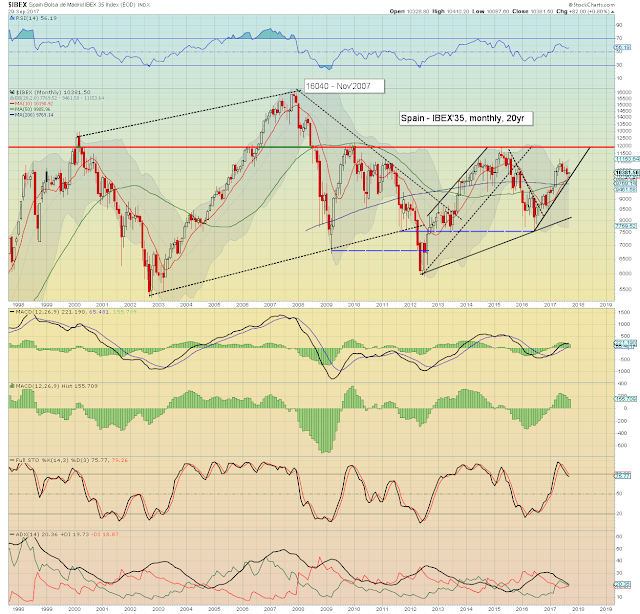 The Spanish market settled +0.8% to 10381. Price structure across the last five months is a viable baby bull flag, which would be confirmed with a break >11k. A broader push to giant resistance of 12k seem probable in early 2018. Any monthly closes >12k would offer 14k, with secondary target of the Nov'2007 historic high of 16040. Only bearish if <10k. 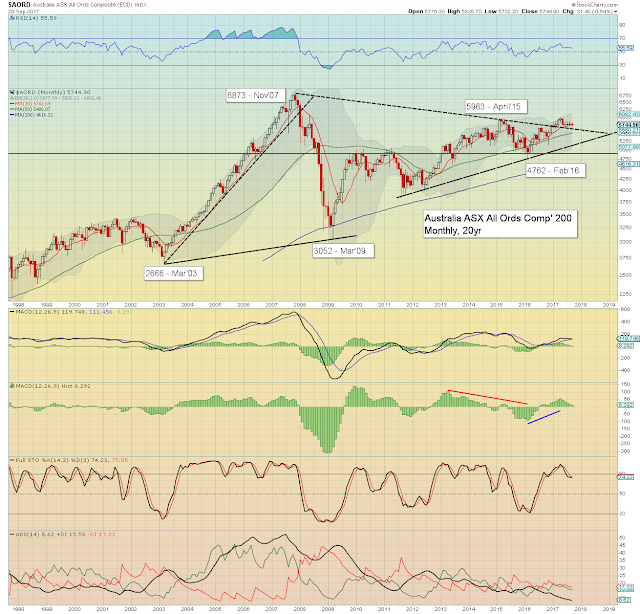 The Australian market was one of the laggards this month, settling -0.5% at 5744. However, this was notably still above above the old declining trend/resistance. First soft upside target is the 6k threshold, and then the Nov'2007 high of 6873, which is 19% to the upside. Only bearish if <5600, which seems unlikely.
--

The USA and Germany are leading the way higher, with Russia and China especially lagging.

A number of markets (such as France, Japan, and Germany) had price structure of a baby bull flag, which has been confirmed in September. That could be labelled as month'1, of a new up wave that will likely continue into spring 2018.

Most markets have around 5% of downside buffer before breaking their mid term bullish trends.
--

I rarely get around to posting on commodities, but as its end month, lets take a look... 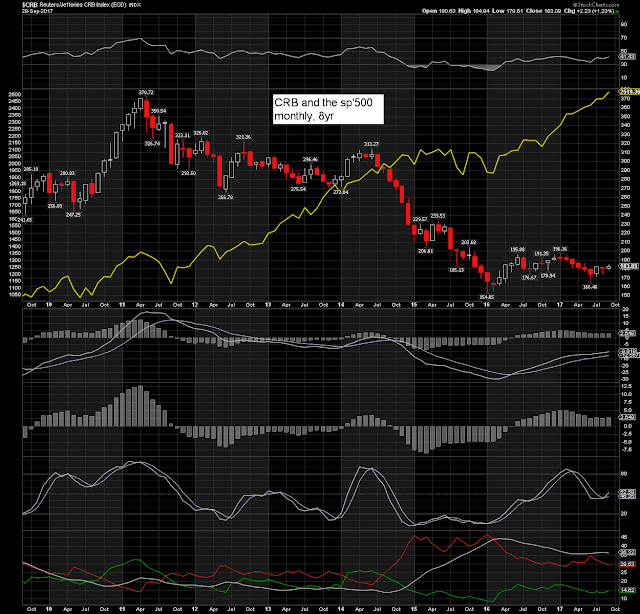 Note the June low for the CRB - when WTIC was $42.05, and also just before gold/silver/copper floored. July saw the first monthly gain of the year. August was choppy, leaning weak. September saw a higher low and higher high, settling +1.2% at 183.09, the highest close since March.

The disparity between commodities and equities remains extreme. Even if just some commodities recover to levels from 2014, that would inspire much higher equity prices. There are massively bullish implications for many sectors, especially energy and mining.
--

Q4 will begin with a fair amount of econ-data...

*there are a few fed officials on the loose. Notably, Yellen (Wed' 2.15pm), I don't believe that will garner live TV coverage though. Bullard (Wed'), and Dudley on Friday will merit attention.
--