US equities have swiftly recovered all of their BREXIT declines, and considering ongoing price action, it would now seem probable that the sp'500 will do what was recently unthinkable, and break 'up and away' within days. The US market remains the world's strongest, and now looks set to lead other markets higher across the rest of the year. 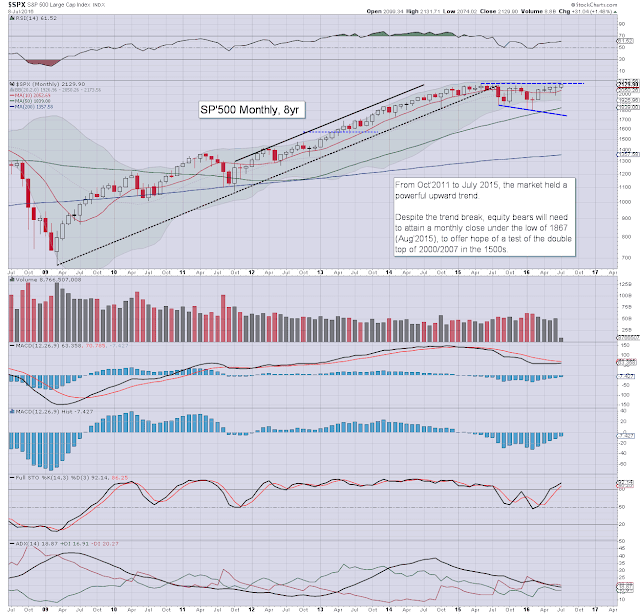 The Friday close of 2129 was a mere 5pts (0.2%) shy of the May 2015 high. Considering ongoing bullish price action, a break to new historic highs looks probable.

If correct, it will argue for what remains of the 'broadly bearish outlook' to be dropped. First upside will be the 2150/70 zone, where the upper monthly bollinger is lurking. A move into the 2200s looks out of range until late Aug/early Sept.

Underlying MACD (blue bar histogram) cycle remains negative, but looks set to turn positive, with a bullish cross in August. Such a technical event would be highly suggestive that the market is in the early phase of another multi-month/year wave higher. 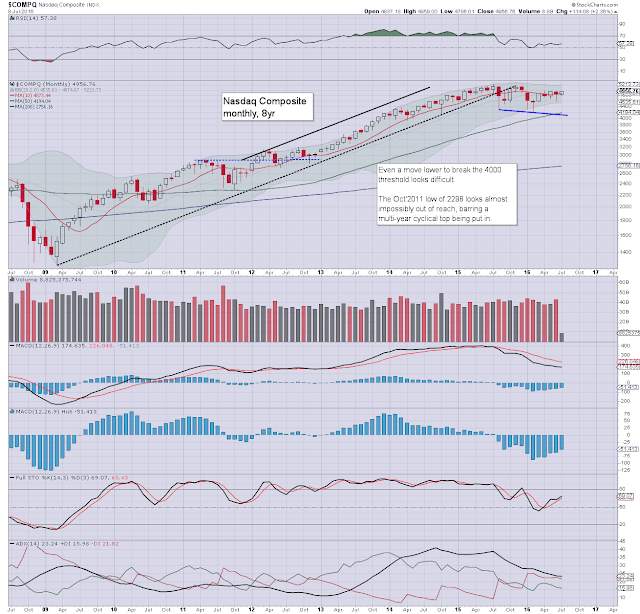 The Nasdaq is making a clear play for the giant psy' level of 5K. Any daily closes >5K, will bode for a continued run to challenge the July 2015 high of 5231. Any monthly close in the 5300s would give clarity of much higher levels into the 6000s by spring 2017. 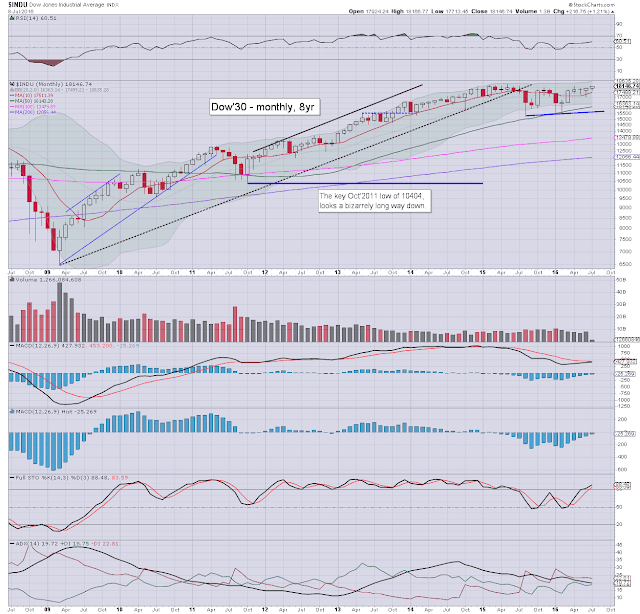 The mighty Dow managed a weekly close back above core resistance of the 18K threshold. The Dow is currently net higher for a sixth consecutive month, the best run since mid 2013. Underlying MACD is very close to turning net positive. A break above the May 2015 high of 18351 will offer 18700/800s by late Aug/early Sept. Even the most bullish outlook would struggle to see 20k by year end. 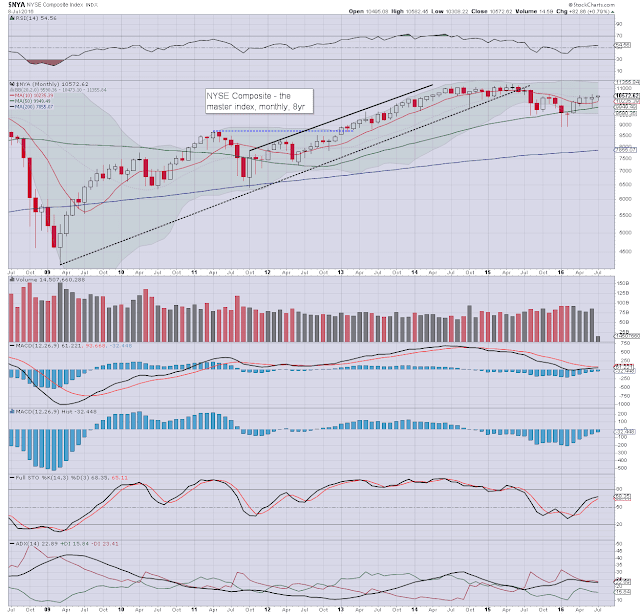 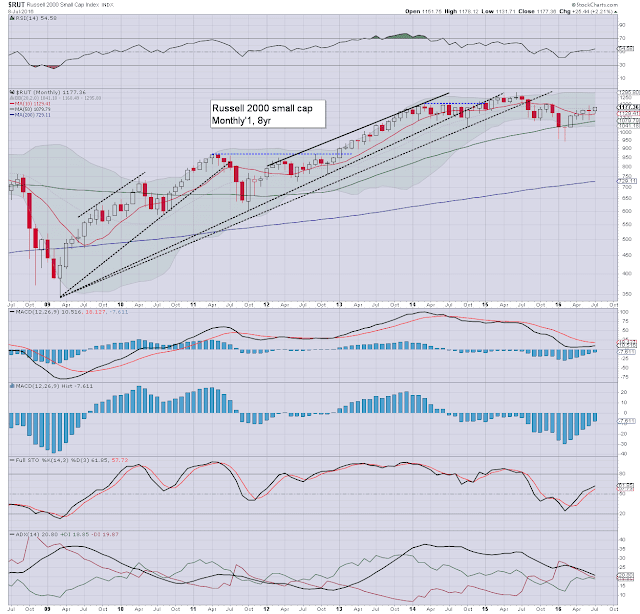 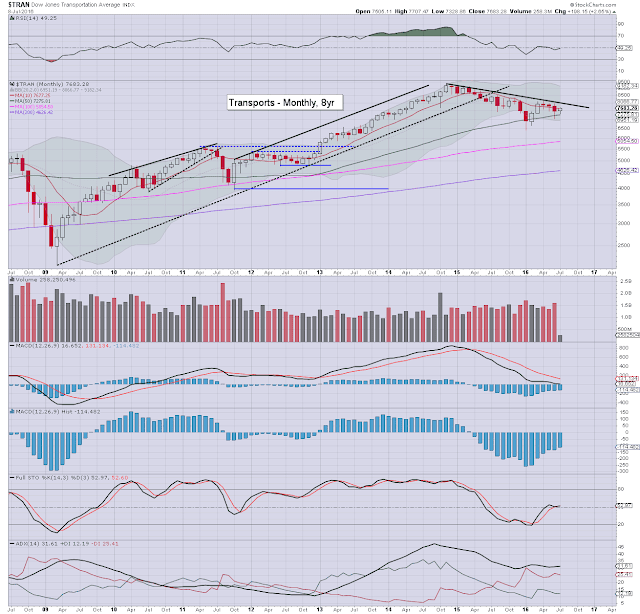 All US indexes continue to battle broadly upward from their Jan/Feb' lows.

The sp'500 is leading the way, followed by the Dow and Nasdaq.

Even if the 'headline indexes' break new historic highs in July/August, it will take the 'two leaders - Trans/R2K, a good 3-6 months to break similar new highs.

*there are an absolute truck load of appearances from Fed officials.
--


Trying to keep an open mind

The Friday close of sp'2129 is clearly not a new historic high, but current price momentum sure does suggest a straight forward gap higher next Monday >2134. We could certainly fail from current levels, but after the past few days, its looking unlikely.

Despite the name, I can trade on the long side. If sp>2134, that will rule out any shorts for some months, and I'll merely seek to trade some quality stocks.

Q2 earnings season begins next Monday with Alcoa (AA), and there should be some interesting trading opportunities across the next few weeks.


--
If you have valued my posts across the last four years, you can support me via a subscription, which will give you access to my relentless intraday postings.

*the next post on this page will appear Monday @ 7pm EST
---

***I am updating the page template and other things this weekend.
Posted by Trading Sunset at 17:00:00
Email ThisBlogThis!Share to TwitterShare to FacebookShare to Pinterest
Newer Post Older Post Home