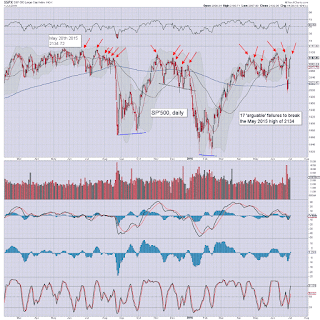 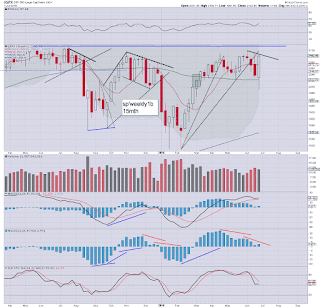 I can understand if you'd dismiss some of the cycle peaks, but we've had at least a clear dozen failures.

Those bull maniacs who still believe we are in a bull market.... err... no.

However, equity bears can't claim we're in a bear market either, as a fair number of the main US indexes remain close to historic highs.
--

re: weekly1b: consider the underlying MACD (blue bar histogram) cycle. The pattern is similar to mid December 2015. If it repeats, next week should close at least moderately net lower, with more powerful downside the week of July 11-15. It is notable that the lower bollinger will be in the 1970/60s next week.
--


--
Thanks for the many comments/emails this week, it is always good to hear from you.

*the weekend post will appear Sat' at 12pm EST, and will detail the world monthly indexes.
Posted by Permabear Doomster at 00:00:00
Email ThisBlogThis!Share to TwitterShare to FacebookShare to Pinterest
Newer Post Older Post Home