Whilst US equity indexes saw a second consecutive net weekly decline, the giant monthly cycles highlight how the market remains stuck under the winter 2014/summer 2015 highs. A fierce battle continues in the market, between the bull maniacs who are seeking new historic highs, and the doomer bears who should be targeting the sp'1600/1500s. 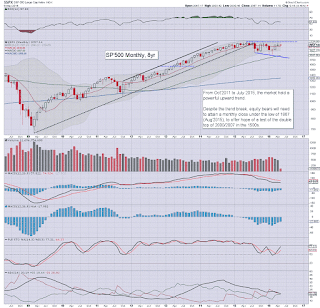 Without getting lost in the minor day to day (or even week to week) noise... what can be said about the broader picture?

First, the market remains broadly stuck since the May 2015 high of 2134. The bulls pushed hard into Dec'2015, but stalled, resulting in a fractional new multi-year low of 1810.

Underlying MACD (blue bar histogram) continues to tick higher for a third month. At the current rate, there is the possibility of a bullish cross in July.

However, if the market can't resume pushing higher, the next failure will result in another strong multi-week down wave, at least back to the low sp'1800s. In theory, if price structure in the sp'500 is indeed a head/shoulders formation (see weekly charts in previous post), the downside target would be a natural sp'1600.

Best guess: regardless of any near term chop, increasing weakness into late May... with a monthly close in the 1950/00 zone. That should clarify that June will see the 1800s.. if not the 1700s.

Of course, any break >2111 should spook most bears out of their positions, and any move >2134 would bode for much higher levels into year end.
-- 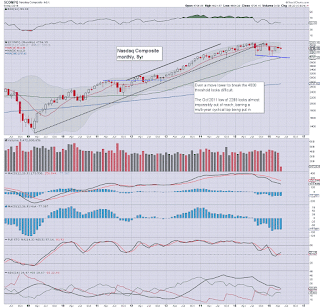 The tech' remains particularly weak, with 4 of the last 5 monthly candles net lower. The Nasdaq comp' is currently trading a little under the key 10MA of 4811. The big 5K threshold looks out of range in the near term. First downside target are the 4500s, with 4200/4000 viable in June. 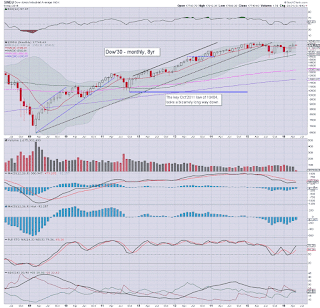 The mighty Dow remains unable to attain a monthly close above the key 18K threshold. Equity bears should be seeking a break back under 17K by end May. From there.. next level are the 16500s, then the Aug'2015 low of 15370. 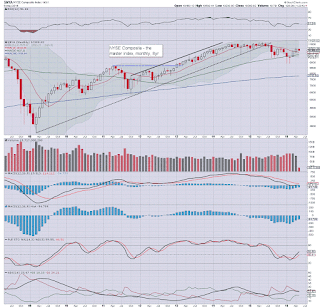 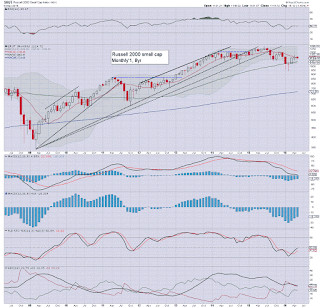 The second market leader - R2K, remains firmly stuck around the 10MA (1118). Equity bulls can't get confident again until a monthly close in the 1200s, and right now, that looks out of range. Bears should be seeking 1050/25 zone by end May. 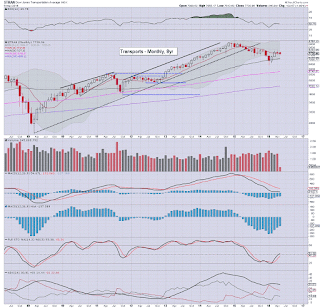 The 'old leader' - Transports, is so far still unable to re-take the 8K threshold, and is trading around the key 10MA of 7717. Equity bears should be seeking a May close around 7K. If broader market upset this summer/autumn, the 5500/5000 zone is a valid target.
--

First, it should be clear that the US - along with most other world markets, remains broadly stuck since indexes maxed out in late 2014 (lead by the Transports) to summer 2015 (Nasdaq last to peak).

The market has seen two strong down waves, in Aug'2015 and Jan/Feb' 2016. Both times, the market rallied strongly.. but has been unable to keep pushing higher.

Price structure on many stocks.. and some indexes, is a viable H/S formation. By definition, if the market sees another major wave lower, it should at least test the recent lows, and eventually (after a few weeks of strong chop).. break lower by a further 10%.

Renewed weakness in commodities.. especially Oil/Nat' gas.
Corp' profits.. even in the once relentessly strong intl' giants like AAPL.
Growth/production... is at least 'moderately weak'.


Next US rate increase?

Many now recognise the Fed will NOT raise rates at the June FOMC meeting ahead of the UK vote. Neither will they raise them ahead of the US election. That merely leaves the Dec' meeting for a second 25bps increase.... and that assumes the US hasn't slipped into a recession... or the market hasn't imploded to the sp'1600/1500s.

By definition, no rate hikes is bullish for market confidence, but such upside inclination will likely be fully negated by underlying economic weakness.. or by any geo-political event.

There is little of significance scheduled.

*there is a sprinkling of fed officials across the week, notably Kashkari on Monday afternoon.
--