VIX climbs into the close

It was a very mixed day for the VIX, which saw an opening reversal/black-fail candle, with the VIX then rapidly cooling to a low of 13.30. However, with significant equity weakness into the close, the VIX rebounded, settling +10.5% @ 15.22. Near term outlook offers the sp'2060s, which will likely equate to VIX 16s. 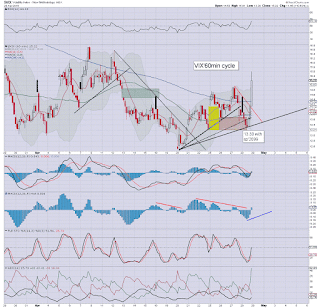 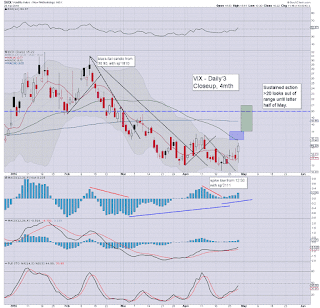 For those involved in the VIX, today was a real damn mess. Not only did the VIX see a classic opening reversal - as reflected in the equity market, but the VIX almost broke into the 12s !

As things are, the equity bulls look tired, and were clearly unwilling to buy into the sp'2100s, with the VIX strongly rebounding as equities rapidly cooled into the close.

What should remain clear, sustained action above the key VIX 20 threshold looks out of range until the latter half of May.