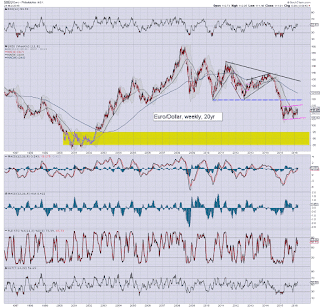 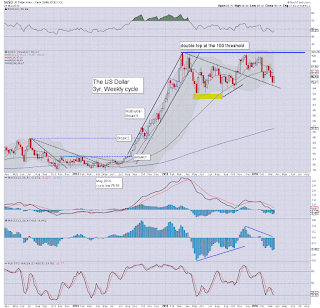 re: Euro. There is massive resistance around the 1.20 threshold. Price structure is a clear bear flag that now stretches across a full year.

re: USD... broadly choppy since spring 2015, with a clear double top from natural resistance of DXY 100. Current price structure is offering a back test of the old declining resistance.

An eventual break >100 seems extremely probable, from there.. first target are the 120s.
--

The implications of such a Euro decline and USD surge should be clear to most traders. In particular, Oil - and related energy stocks would likely be obliterated.

The DISQUS comments system is still having problems. I am still able to receive and reply to comments, but they won't likely appear in a given post. This issue is not specific to these pages, with MANY blogs/sites affected across the world. I'd imagine it will be fixed within a few days.
--