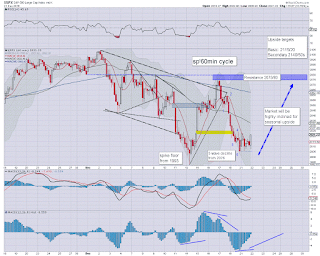 *closing hour action: a spike floor of 2007, with a pretty strong surge into the close.
--

Well, after the particularly weak Friday quad-opex close, there was a fair bit of crash chatter across the weekend. Not surprisingly though, none of that nonsense talk was right, as the market is set for increasingly subdued conditions into year end.

Any talk of collapse, crashes.. or other drama relating to the 'end of the world' is to be dismissed as crazy talk.

Those equity bears of the more balanced nature should merely have eyes on whether the US and other world markets can claw back above the monthly 10MAs*.

-
*I realise there are other valid averages/measures to delineate whether there really is a threat of a major down wave in Q1/Q2 2016, but for me.. the 10MA remains a favoured one.