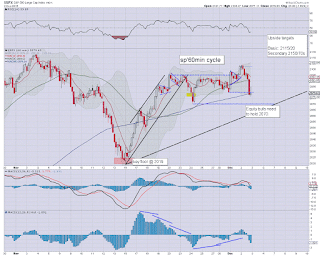 Clearly, the afternoon weakness was surprising, but then we had two key excuses.. Oil losing the $40 threshold, and then the latest media shooting event.

It is notable that the daily sp'500 candle was of the bearish engulfing type, and that does bode in favour of the equity bears for tomorrow.

However, would Draghi dare disappoint the EU markets tomorrow?

Best guess remains unchanged... renewed upside to the 2115/20 zone, and it remains entirely viable for a straight run higher into the FOMC... at which time we could be in the 2150/70 zone.