Another round of Chinese witch hunts

Whilst the US market ended the week on a naturally quiet note, there was serious upset in Chinese equities. With the communist leadership launching renewed witch hunts against anyone who dares suggest.. or actually short equities/commodities, the Shanghai comp' is looking vulnerable. 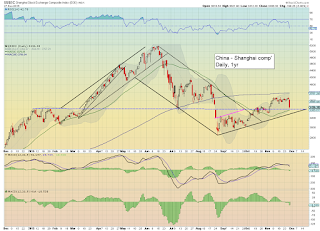 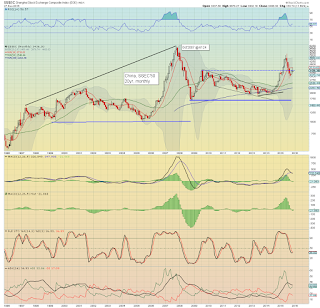 It is not at all surprising to have read more reports that the Chinese leadership have launched a new round of witch hunts. It is though... very disappointing.

With the Shanghai comp' having successfully re-taken old support of the 3400s, it was getting rather close to re-taking the monthly 10MA (3713). Yet with a net Friday decline of -5.5% to 3436, November is instead going to end on a rather dowdy note.

If Monday closes net lower by more than -1.6%, it'll make for a bearish closing monthly candle.. with a very clear spiky top.. indicative of a significant failure to re-take the 10MA.

Aside from merely distorting the natural buy/sell side in the market, the continued 'blame the shorts' will not solve the underlying structural problems.

China is still a rapidly evolving economy, but one that goes against the very basis of what the communists believe in. As has been the case since the 1980s.. it remains a very strange situation.