Tuesday has opened much like Monday... some mixed chop, but leaning on the downside. A move into the sp'2070s looks a given... whether late today, or tomorrow, along with VIX 14s. A third consecutive net daily decline looks probable. 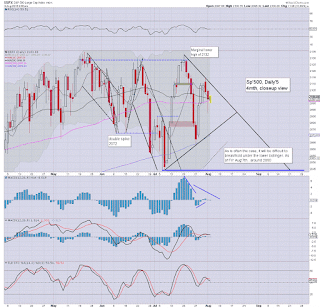 Mr Market is battling to break/hold above sp'2100/50dma.. but its really struggling.

I realise some are calling for another wave higher, but we're now into August, and recent price action (go look at a Dow weekly chart) bodes that the bulls are out of time.

With the VIX already so low, I can't see how the market is going to be able to push higher to the upper weekly.. never mind the monthly bollinger - the latter now @ sp'2186. 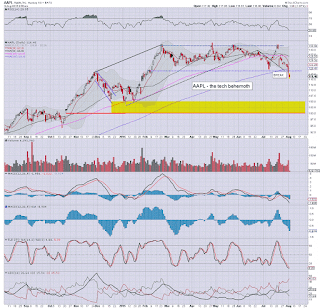 ... as more traders start to realise the importance of yesterdays loss of key support. Target is indeed the 105/100 zone.

1.8%... a touch above market consensus... certainly nothing bad about that number, and remains within the average of the last four years.