With equities managing to hold significant gains, the sp'500 saw a fractional net weekly decline of -0.2pts @ 2076. Understandably, many of the equity bears are once again starting to get really annoyed and frustrated, as the declines are still not being sustained. 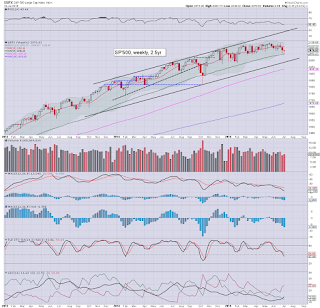 I've little to add on US equities. Instead, I wanted to end the week by highlighting a comment that I received this morning... 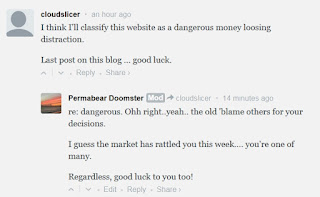 First, I'm not saying cloudslicer is one of the usual sporadic trolls. Far from it... CS had posted for some months to me. Yet.. the sentiment is important to consider.

One aspect is of the blame.. and cloudslicer has surely been rattled by the intraday swings this week... as I myself have been. Who hasn't been dizzy this week?

A distraction? Well, I guess anything in life could be called that.

Dangerous? Any financial chatter on any site - whether CNBC/Bloomberg, or a tiny blog like mine, could be seen as a problem, to those buying/selling on margin, with low/zero risk management skills.

Money loosing? Well, my posts remain free in the public domain, so.. no one can demand a 'FULL refund'.
--

Since the US market broke the double top of 2000/2007 in summer 2013, I waved the giant white flag. Indeed, at the time, I stated on a number of message boards... 'we ain't likely going under sp'1500 EVER again'. At the time, amongst many things I was called.. 'crazy' was a particularly popular one.

After all, the sp'500 would never go to 2K... no.. it was just an 'overthrow', right? I still don't get how even today, most of the more popular chartists don't ever reflect on the huge implications of the multi-decade breakout that happened in summer 2013.

With the Shanghai comp' breaking 2500 in November 2014, the next natural level was the high in late 2009... the 3400s. That was quickly achieved in January. From there... I called for 5K by late 2015. Yeah... more crazy bullish talk from the Permabear... even some banker on CNBC-Asia laughed (them having highlighted one of my tweets) at such an 'overly optimistic' upside target. 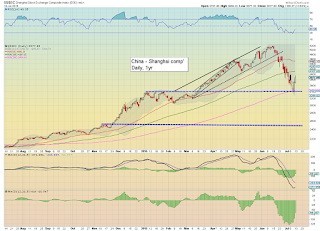 I relentlessly endeavour to provide as balanced an outlook as I can, but I realise for some of you... its just never going to be enough.