Whilst equities settled moderately lower, it was a somewhat bizarre day for yours truly. For once... a little glimpse into my world. 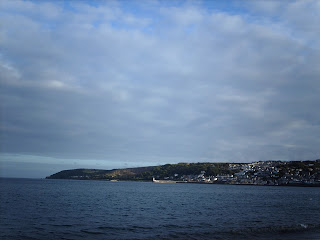 The picture above is of Newlyn Harbour, seen from a rather rocky beach in Penzance. It has been over a decade since I last visited the most south westerly town in the UK.

As a child, I must have spent a few thousand hours in what for me, remains a truly mystical place. 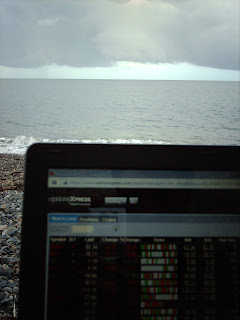 The last time I visited Penzance, broadband was only beginning to be rolled out in the UK, and the notion of WIFI via a tiny mobile device plugged into a laptop was a mere dream.

Maybe I am just easily impressed, but having my trading screen working flawlessly whilst sitting next to the towering sea wall... its pretty incredible how far we've come since the late 1990s.

As for why I was at the coast today, I was there for a property viewing. I'm looking to leave London city, be in a better home, in the town that I often dream of. Regardless of the market nonsense, at least this deeply personal aim of mine is finally set to come true by the early autumn.
--

*more corp' earnings are due of course.
-

Yours truly 'might' post something intraday tomorrow as I will make the long journey home. I have never tried wifi on an express train before. If that doesn't work out so great (or if I'm more interested in staring out the window), I will instead likely return for the closing hour at 3pm EST.

Ever since I started writing this blog in spring 2012 I have occasionally wondered if I would ever conclude with something different... and tonight I can.