US equity indexes remain moderately weak, and look highly vulnerable to weakness for the remaining two trading hours of May. Price structure is a bear flag on the micro 5/15min equity cycles. USD remains a touch weak, -0.1% in the DXY 96.80s. 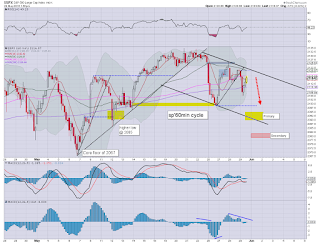 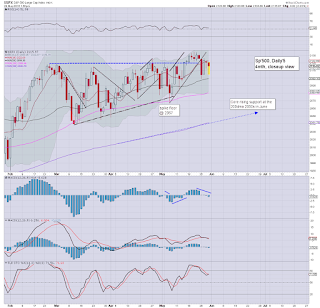 *note the lower bollinger on the daily cycle... offering the low 2080s early next week.
--

I realise some will be calling for new highs from the earlier floor of sp'2104, but broader upside looks unlikely until the Greeks come to an agreement later next week. As ever though.. any agreement will merely kick the can for another few months.. if not just weeks.

It should be clear to most now that Greece will initiate some kind of exit.. .whether a partial debt default.. and/or an outright switch back to the Drachma.

There is the bi-annual meeting of OPEC next Friday June 5th... it would seem likely supply will NOT be cut, with WTIC Oil having ramped from the March low of $42s to the current $60.

There looks to be upside to 65/67 by late June/early June. Sustained price action in the $70s looks VERY unlikely for the rest of this year.
-