World equities are looking very strong after the weakness in the early summer. Lead higher by the US and German markets, all world indexes are currently battling higher, and look set to build gains of a further 20-30% into late spring 2014. 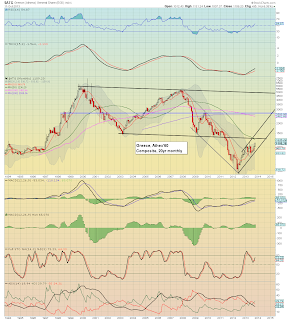 The Greek index is higher for the fourth consecutive month, and is already showing good gains of 9.4%. There really isn't any reason why the Athex won't claw its way to the 1250/1300 zone, where is there is some resistance from old broken support. If we see a monthly close or two in the 1400s, I have to believe the 2500 level will be hit, but that is 125% higher! 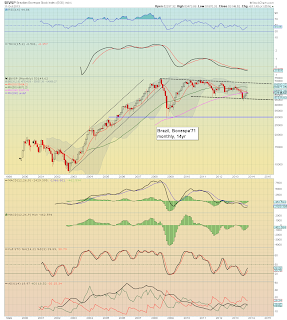 Brazil is struggling a little after the summer declines. Underlying MACD (green bar histogram) cycle is ticking higher, and is set to go positive cycle in November. An end year target of 57500/59000 looks viable, if the other world markets can similarly keep rallying into Christmas. 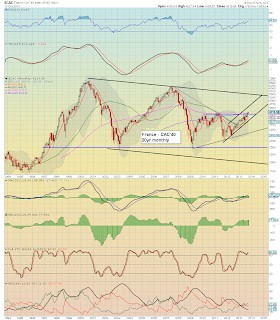 Despite the relentlessly anti-capitalism policies of the French leadership - such as trying to make it illegal for any profitable company to make people redundant, the CAC is holding above old resistance. Next upside target is the big 5000 level, and that is a good 20% higher.. that looks viable by late spring 2014. Nothing bearish here. 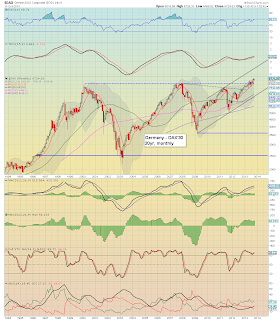 The powerhouse of the EU, the DAX is holding above the old double top of 2000/2007. Next upside target are the psy' levels of 9k and 10k. Certainly, if things 'stay calm' in the EU in the mid-term, DAX at 10k looks very probable. 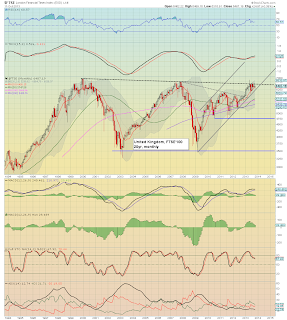 The basket case that is the United Kingdom remains struggling, and is still somewhat weak, having been stuck just under the declining resistance of the 2000/2007 tops. The FTSE needs to hold trend support of 6250, otherwise 6k will be quickly hit. However, considering the other world indexes, the FTSE should eventually manage to break new territory in the months ahead. 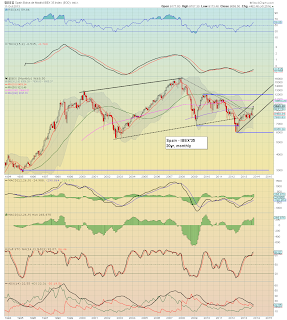 The ugliest of the two giant EU PIIGS, Spain is showing significant follow through from the gains of September. I have to think the 12k level is going to be tested by next spring, that is almost 30% higher than current levels. 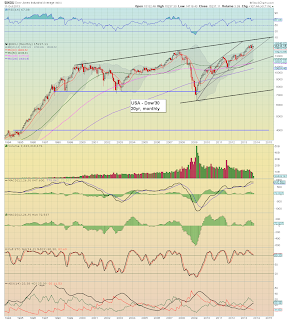 The economic engine of the world (well, at least when it comes to printing money), the Dow - along with all other US indexes, is trying to resume the broader upward trend. On the big monthly charts, the recent six months of sideways trading action could merely be a giant bull flag. Target upside on a 3-6 month time frame, is 16250/500, by early spring.

Underlying MACD cycle has ticked lower for the third month, although as noted, all the recent months of price action could merely be consolidation before the next push higher. With QE continuing at $85bn a month, and likely across much of 2014, the US financial markets have a near limitless amount of liquidity flowing into equities. 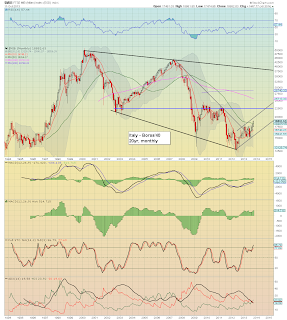 The Italian equity market is showing very strong gains of 8% so far this month, and looks set to battle higher into spring 2014. Target is the 22500 zone, which is around 20% higher. 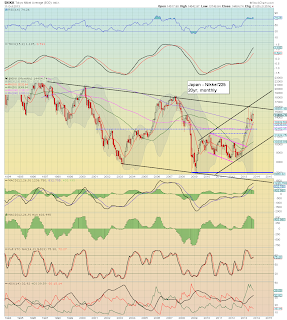 With 'Abenomics' continuing, the Nikkei is making another push to take out the hugely important declining resistance that goes back over twenty years. Equity bulls should be charging for a monthly close above 16k. If that is achieved, then 18k will likely be hit by the spring. 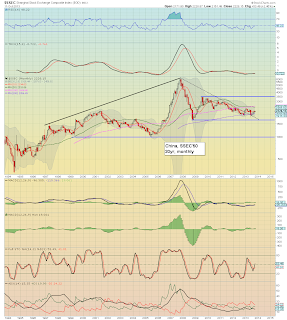 China is showing gains of 2% so far this month, and this is the fourth consecutive monthly gain. First key target is 2500 - which is 10% higher. After that, 3500, which is 40% higher than current levels.

What is absolutely clear more than anything, taken as a whole, the world equity markets are ALL pushing higher. They are lead by new historic highs in the Dow and the DAX. What remains especially surprising is the strength seen in the EU PIIGS, especially Spain and Italy. We have seen clear breaks above the old 2008 collapse wave trends finally broken, and both markets are in very clear recovery trends.

I have to say, baring some major macro news/event, ALL the world markets look set to advance a further 20-30% into late spring 2014. From there, maybe we will see a 15/20% correction.

For the equity bears out there seeking the start of a major new bear market wave lower, NONE of the world indexes are offering ANY sign of such a thing. Indeed, we're seeing a renewed push higher as concerns about the debt ceiling not being raised start to fade.

With the very strong turnaround from the Wednesday low of sp'1646, the weekly charts are offering significant upside into late Oct/early November. The sp'1740/60s do not look that bold a target zone. 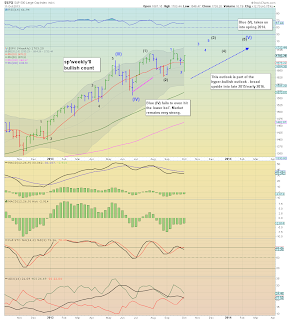 I've added a vain attempt at a count on the above chart, but I won't be confidently bullish until we've broken new highs >1729, but even then, I'd be concerned of a possible turn at any time, not least in the 1740/60 zone. Based on the past few years, I'm somewhat resigned to some sort of 'Santa rally', with a further 'green shoots of recovery' in the spring. With continuing QE, it will be very difficult for the bears to get a major multi-month down wave.

Monday has nothing lined up, and could be somewhat quiet since it is actually a US holiday (Columbus day). Bernanke is speaking in the evening, but I've no idea if anyone will be taking notice of that.

The next major release will be the Fed Beige book, Wed' at 2pm. Mr Market will probably try to spin that as positive. Thur/Friday sees a collection of Fed people speaking, so expect some kind of market move on further fed-speak. Friday is opex, so the week could end with some chop..not least if we are trading in the 1720/30s.

Finally, as you might have noticed, I've added a new blog/site. I've already included a fair few details explaining what MARCON is all about. I have hopes it will become useful across the longer term. Many of the 'doomer bears' as I still like to call them (of which I include myself) need to keep things in perspective, and I still fear many will get ground down to dust, before the next bear market begins.

I hope that with continued effort, and an open mind...we'll all be here..when it finally does begin.