A case of moon madness?

The sp'500 is now 1078pts above the March 2009 low of 666. It has taken over four years to decisively break into new trading territory. Yet, stock multiples are relatively low compared to the bubble/hysteria highs of previous peaks. Just how much higher can this madness go?

I should first say that I've certainly posted some bold outlooks/scenarios since I began posting in spring 2012. It has been an especially rough time for those on the bearish side. Even if we just reflect back to June 2012, we've seen the market rally from sp'1266 to today's close of 1774 - 508pts across just 16 months.

The following two charts should be taken with a degree of laughter and at least a sprinkling of bearish contempt.
-- 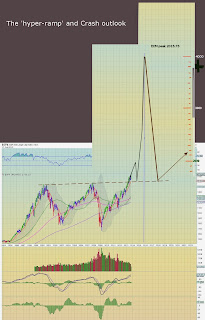 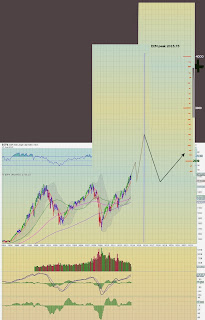 First, I'm resigned to another 2-3 years of 'general' upside. Most out there seem agreed we're going to get a 20% pull back at some point, but equity bears have been persistently calling for that since the sp'1300s last year.

My best guess is we will see such a pull back, but more likely from significantly higher levels, somewhere in the sp'2000/2200 zone, no later than autumn 2014.


Ignore the first chart..and focus on the second 'conservative' outlook

I have to say, the first chart is more of a 'Tulip bubble' outlook, one that I don't honestly think is viable, unless the Fed were to truly go nuts, throwing a few hundred billion a month at the market, if not outright buying stocks to 'support the American economy'.

The second chart though, yes..I do very much favour that kind of outlook. Indeed, I would hope that a fair few chartists out there might have the same kind of 'back test the old double top high' outlook, on the next collapse wave, before the next grand multi-decade economic cycle.

Sp'2500 is simply not that difficult to reach, if you reflect upon what is happening whilst QE continues. If QE is still ongoing to a large extent in 2015 (QE across all of 2014 is now a given), this market will still be climbing. 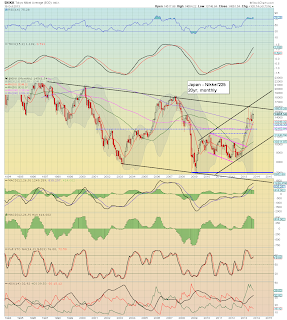 Don't get overly fixated on price targets..or even time. The point I'm trying to make is to be open to much higher levels. Despite the series of multi-week rallies from the Oct'2011 low of sp'1074, I think many are simply not considering just how high this market could actually go. Even the cheer leaders on clown finance TV aren't yet gunning for sp'2000.


One day at a time

Regardless of anything else, we will of course need to take this market one day at a time. There remain huge macro-economic issues, never mind the huge systemic problems with the banking/currency system that we have. Any of those could sporadically blow up..and take the system down.

Anyway, those were two kooky charts to conclude the week. If anything, I hope they provoked a few thoughts. Laugh all you like, but do you remember 2-3 years ago when the sp' was in the 1000s? Do you remember how anyone talking about new highs >sp'1576 was simply laughed at. It is time to seriously start talking about the sp'2000s...and beyond.