With equity indexes slipping for the third day in a row (ohh...the humanity), the VIX still struggled to stay green, closing just +2.0% @ 12.98, having peaked in the morning @ 13.91. The VIX looks set for higher levels in the days ahead, but the upper teens look way out of range. 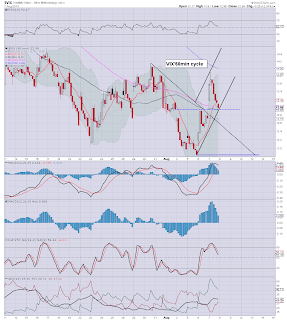 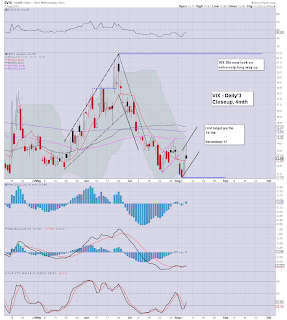 Once again the VIX tells the story of the underlying strength..and lack of fear in this market.

Frankly, the mainstream simply aren't taking the current declines seriously, and I have to note, I kinda understand that sentiment. The sp' is a mere 1.2% below its recent high, and the bears need to keep the current three day wave lower in perspective.

VIX 14/15 certainly looks viable within the next few days, perhaps as early as late Friday - if sp' is trading in the 1660s.

However, anything higher than 15 looks really difficult.
--
more later..on the indexes
Posted by Permabear Doomster at 23:00:00
Email ThisBlogThis!Share to TwitterShare to FacebookShare to Pinterest
Newer Post Older Post Home