Market looks like it is more than content to remain in 'sleepy summer' holiday mode. These are prime conditions for algo-bot melt, and a moderately higher close now looks likely, not least with the Trans/R2K both holding gains of around 0.55% 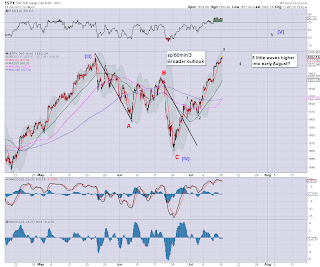 Many seem agreed we are within a large fifth wave higher, and that we are currently in sub'3.

It is entirely viable that sub'3 continues another week or two.

Trying to trade sub'4 on the downside..is arguably a stupid idea, I won't be doing it.

Best guess remains..a cycle peak in early August..and then once again I will be looking for a hit of the lower weekly bollinger (currently sp'1524..and rising)..although yes..I was aiming for the same style of decline in the recent 4 wave...and missed by 60pts.