The main indexes again closed mixed. The Dow and Transports managed fractional gains of 0.1%, the R2K lost 0.5%, and the SP -0.2% @ 1582. If the market has put in a key marginally lower high, then next week should see a much stronger wave lower, taking out sp'1536. 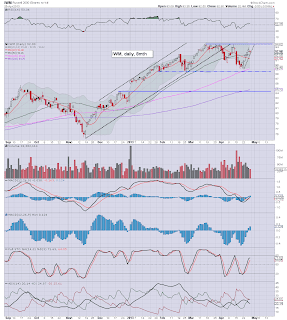 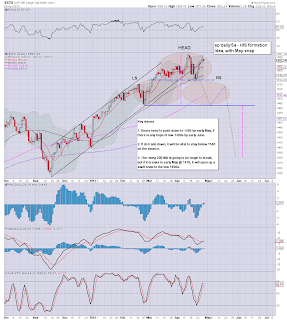 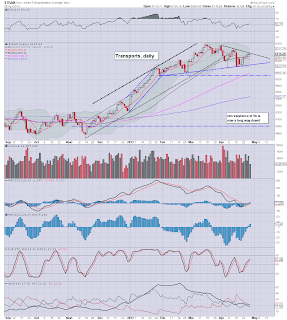 The indexes continue to be trading somewhat mixed these past few days. The Dow is still extremely resilient, and the marginally positive close was again testament that the 'dip buyers' are still out there.


What to make of this week?

Well, a bounce certainly was expected a week ago, but my expectation that it would get stuck around 1570 was a serious under-estimate. The five day rally to 1592 did one thing though, it put in an important lower high. Yes, it was a mere 5pts shy of 1597, but a lower high..is still a lower high.

Even more important to keep in mind is that the recent low of 1536 was also a lower low.

So, we have a lower low...and a lower high in the past few weeks. That's a start, but I won't be pleased until the next down cycle takes out 1536. Once that is broken, we should be seeing some kind of major downside action to hit the primary target zone of sp'1490/80.
--

Its been a long week, so that's it for today.

Goodnight from London
--
*next main post will be late Saturday, on the US weekly index cycles.
Posted by Trading Sunset at 01:00:00
Email ThisBlogThis!Share to TwitterShare to FacebookShare to Pinterest
Newer Post Older Post Home