We are already one month into the year, and the world indexes are continuing to cruise higher. There are very clear breakouts in a wide spread of nations. Even the EU PIIGS are showing strength. There is open air of 10-15% for most indexes, and it looks like we'll be rallying into the early summer.

Lets take our regular broad look at ten of the world indexes... 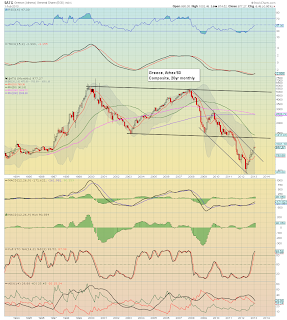 The ugliest of the PIIGS is continuing to rally, and is now in its second month outside of the five year down channel. Next upside is around 1150/1250, there is a pretty easy 15-20% upside for the Greeks into Q2. 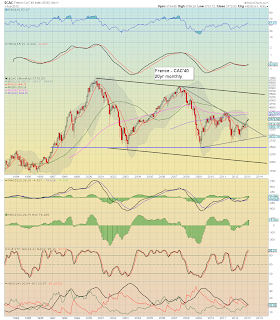 Despite the crazy policies of its new socialist imperial leader - Hollande, the CAC is battling higher. There is a clear 300/400pts of further upside, that's a good 10-15% across the next 2-4 months.

Its no longer so much 'vive la france', as ...Vive la tax escapees 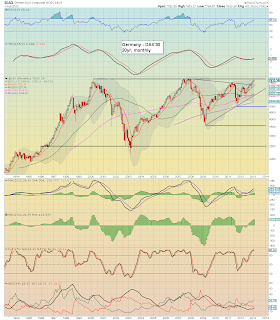 The powerhouse of the EU, the DAX is now approaching the double high of 2000/2007. I would have to believe it'll break above, which in itself will be a major bullish victory. Are we looking at DAX 10,000 within the next year or so? 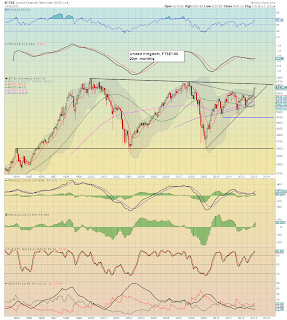 The old 'poor man of Europe' is now back in recession (although technically, it'll only be a 'recession' if Q1 is also neg' GDP). Clearly, the Govt. policy of high taxes and high spending is working, right?

Breaking 6500 won't be easy for the FTSE, but with further QE from the BoE, I think we'll soon be looking at 7k within the next 3-5 months.

Regardless of the nominal prices of the UK stock market, for many millions, its been a depression era for over five years. 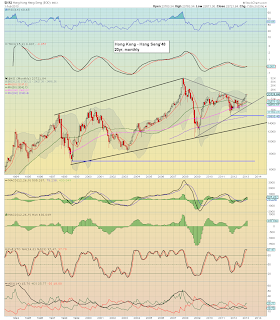 Hong Kong continues to be a shining star in Asia, and was the first to break out of the down trend last autumn. There is open air to 25/26k, if that is broken, then we're looking at 30/32k in the mid-term. Bullish economy...bullish market. 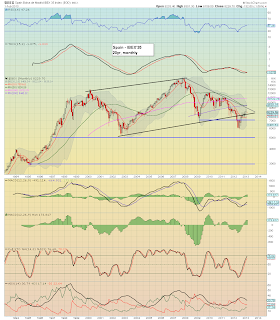 One of the two major problems of the EU, the Spanish economy continues to weaken, and relative to other counties, the IBEX is really lagging.

Yet, even here the trend is upward, next target is declining resistance at 9k, and then 10k. That is a good 15-20% upside by early summer.

Considering the systemic problems inherent in Spain, - baring major price inflation via the ECB, I think the IBEX will go the way of the Greek market - which is still -80% from the 2007 bubble peak. 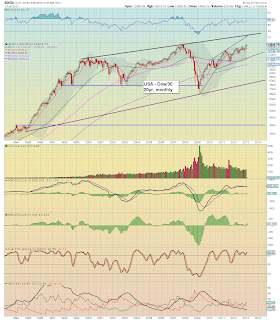 Considering the Transports and Rus'2000 are already in historic territory, we're very likely looking at Dow 14500/15k within a few months. The only issue is whether the POMO money is enough to keep prices battling higher, despite some renewed signs that the US is slipping into a recession. Earnings and econ-data for Q1 will be VERY important this coming April. 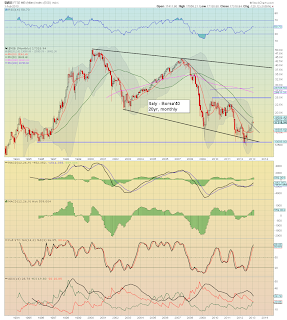 The second of the two biggest EU PIIGS, Italy is doing slightly better than Spain. We have a clear breakout of the down channel, and next resistance is 20k, and then 25k. The latter of which is almost 50% higher!

Nothing bearish here, trend is...clearly UP. 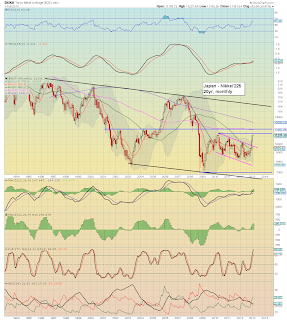 The demographic mess of Japan is ramping. This is unquestionably primarily due to its new leader deciding to trash its currency. A short term gain, but one which will end in utter disaster of course for its bond market.

Next key resistance is around 12k, and then 16k. If the Yen continues to weaken for much of the year, then you'd have to assume 16k will be hit, which is a good 30% or so higher.

Japan remains even more vulnerable to a 'system failure' than even any of those ugly EU PIIGS. 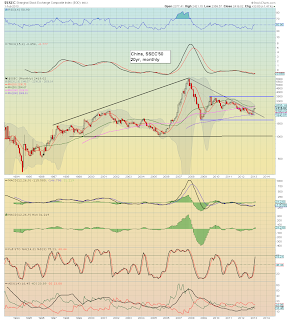 After the China market teasingly broke below the 2k level last December, it has since surged higher, and is now comfortably showing a very clear breakout. There is good upside to 3500, which is a good 40% higher.

Without question, the world equity markets are continuing to show very bullish signs. Yes, all the markets are still below their 2007/8 peaks, but we now have upward trends that extend back to summer 2012.

The trend is indeed bullish, and there is frankly NOTHING that would suggest its going to end any time soon. Indeed, as the last four years have shown, the spring is usually a very bullish market period anyway.

So, in the immediate 3-5 months, I will guess most indexes will be a further 10-15% higher. Whether we then get stuck..and see a moderate 5-10% pull back, that is arguably pointless to consider at this stage.

Personally, what interest me more is where we will be trading at the end of this year? So long as there are no real 'scares' this summer, I'd have to think the world markets will see a VERY strong 2013, with gains of 30% for most indexes.

On that basis, that would make 2013 one hell of a strong year.

After the big GDP and Jobs data this past week, the coming week will be a quieter one. I guess it then has to be accepted, that will give the algo-bots an even easier time to melt this market higher.

Yet..with each index pt. higher, we are inevitably closer to a pull back. If there is one, then the following fib levels will be important. 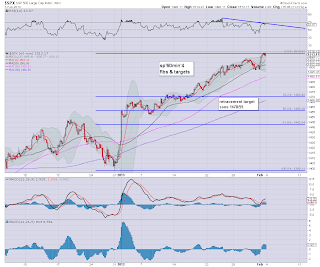 All things considered, the sp'1440s now look totally out of range for a very considerable time, months..if not much longer. The best the bears can hope for is somewhere around 1460/55.

If we do pull back from here, I am keeping in mind Valentines day. There is a huge POMO on that day (Thursday Feb'14, a mere day before opex)...at which point, I'd have to believe we'll be starting a major new up wave into March, and which could extend all the way into the summer.

If you are a believer that the Feds 'benny bux' - aka POMO dollars, are making their way into the equity markets, then you have to consider that this summer, we could easily be trading in the sp'1600s..if not even the 1700s.

However, many have noted - not least Marc (Dr Doom) Faber, that it could all end up turning out like 1987, but then, such occasions like that are arguably almost untradable anyway. In many ways, I really hope we don't have a 1987 for that precise reason.