The US markets remain incredibly strong. Today was a classic instance, with opening moderate declines, but those were reduced by two thirds, with the usual latter day ramp. There remain many bears seeking a wave lower, but they need a daily close in the low 1490s to have any hopes of testing key rising channel support in the sp'1460/50s 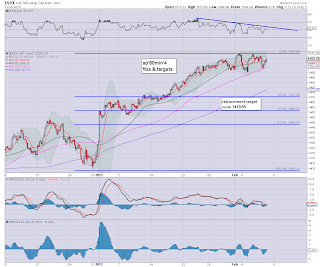 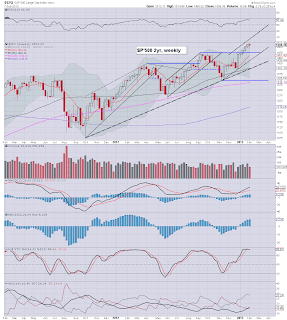 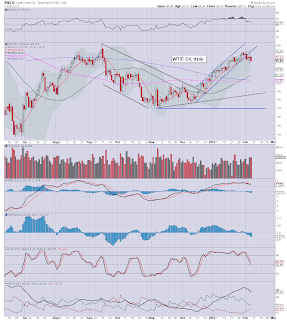 From the bearish perspective, its been six weeks of utter frustration, pain - not least financially, and a lot of utterly tedious algo-bot melt.

Its been a pretty choppy week, and it seems to have confused..and whipsawed even a few of the more balance pros - again, I will dare cite Oscar Carboni.

Clearly, we're going to get a moderate wave lower at some point, but it remains unclear how many days..weeks..or even months that might first need to elapse.

We've broken the near term steep uptrend, and a move down to around 93/92 seems likely, before we ramp higher into March. At this point, it seems extremely unlikely we'll see WTIC in the 80s for some months.

The sp'weekly chart offers clear rising support in the sp'1460/50 zone. A move <1450 seems exceptionally unlikely on a 3 month outlook.

It disturbs me just to consider it, never mind note it for thousands of others to read, but it looks like we'll doubtless test the 2007 high of sp'1576 this April/May. Whether we can break into the 1600s, before a 'mid-size' pull back of 10-15%, that's the only issue I'm now keeping in mind.