Despite the main indexes all closing a little higher, the VIX finally put in a daily net positive close, rising 1.4% to settle @ 13.81. This breaks what has been a severe six day collapse from the 23s, to the low 13s. First soft target is 14.50, but a very valid bigger target is a gap-fill zone from 16-18. 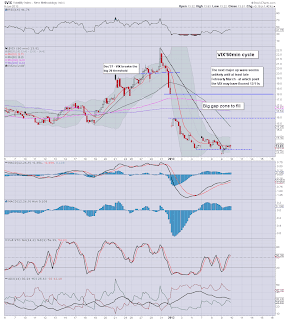 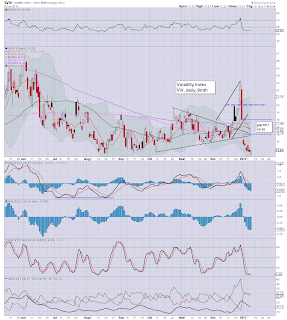 So finally an up day in volatility land, but we remain in the bizarre low teens. It is remarkable, considering we have the fiscal cliff delay expiring in less than two months, and then there is the much bigger debt ceiling.

Even if the US President decides to start writing exec' orders to just dismiss the debt ceiling, that might upset the bigger capital markets, and start to bring real caution about what shred of 'fiscal conservatism' remains in the USA.
--

Best guess, we should see VIX break into the mid 14s tomorrow, and then 16s late Friday..or possibly early next week.

Considering the bigger index cycles, I just don't think the VIX will be able to break 18 until late Feb/early March.