Whilst the indexes remain largely stuck, its important to keep the bigger daily charts in mind. The VIX certainly looks to have floored (at least in the near term) in the 13s, and the SP' sure appears stuck under the mid-Sept' QE high of 1474. 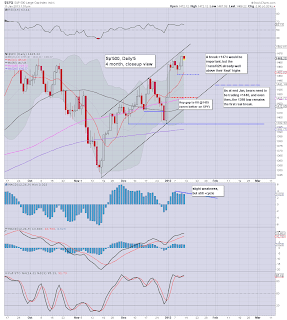 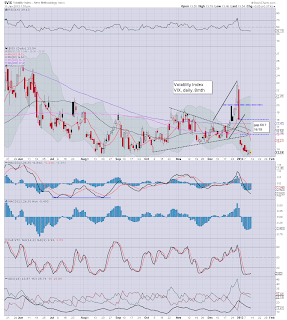 A key level on the daily chart is the giant gap @ 1425. Its not seen on the spx' chart, but more so on the index ETFs, such as the SPY.

The low end of a retracement was indeed in the mid 1420s...so that zone is certainly a natural place for any decline.

Lets be clear, a move to the low 1420s AFTER next week would be a break of the rising channel support, and I can't see that happening.

As ever..its just a thought..from someone who is still very much 'in love with the downside.'
Posted by Trading Sunset at 18:53:00
Email ThisBlogThis!Share to TwitterShare to FacebookShare to Pinterest
Newer Post Older Post Home