Backtest of the broken weekly?

With the indexes closing higher today, the bears are rattled (yet again). The very brief decline to sp'1427 was just too weak a push lower, and Mr Market probably stopped out most of the weaker bears today.  A close over 1450 later this week would be a major threat to the autumnal bearish outlook. 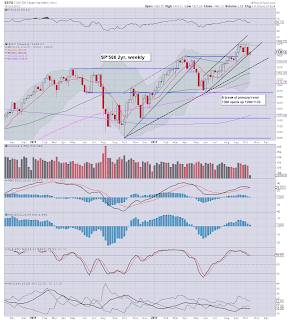 Often is the case, any 'stupid bounce' will retrace back up to 50% of the previous candle (regardless of what time cycle you are looking at). Last weeks mid-point is around sp'1442/44. Clearly, a daily close in the 1450s would be decisive enough to award the bulls another victory.

The underlying MACD (blue bar histogram) cycle IS still rolling over though, and is still set to go negative cycle either later this week or early next. There is potential for a major down move this week.

Let us not forget that the rising trend/channel from the June sp'1266 low has been broken pretty much on all indexes now.

Tuesday does admittedly seem more likely to open higher than lower, but if we could at least close lower, back <1435, then bears still have a shot at pushing down to at least the 1415/00 zone before opex.