Another lousy day for the Euro currency, the close of 1.2366 was very decisive, and its just a matter of days before the next target of 1.20/19 is hit. 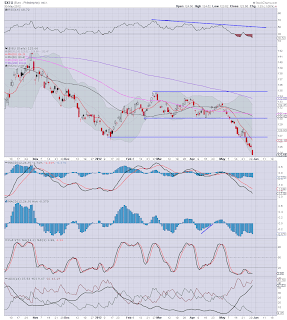 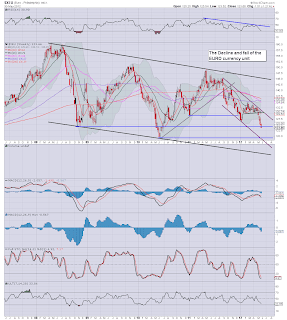 So, the Euro/Dollar will soon be down to 1.20/19. The issue is can it hold that level? If we break into the 1.18s, I'd assume there is a chance of a fast and dirty move to around 1.15/13. There is of course talk of 'parity'. The majority view is that will happen...but not until at least 2013. I suppose if the Greeks fail to form a government on their second election attempt, then parity may even come this summer - which would probably equate to sp'1100..if not sub'1000. Yet neither the Bernanke, nor the EU would be content to tolerate that sort of move this summer.
--

The bears should watch the Euro closely, if we get stuck/floor in the 1.20 zone, - and if Sp'1280...that would probably be a good area to close all short positions.

Support the site....tell your other trader friends!