The VIX closed up a mere 5%, but it was arguably an important 5%, lets take a look at a few of the key charts. 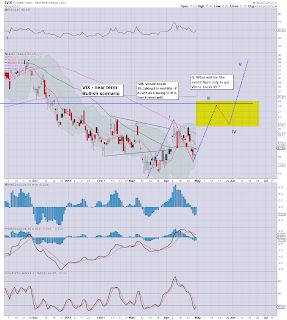 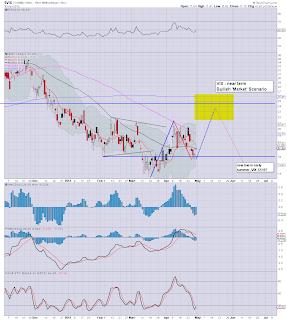 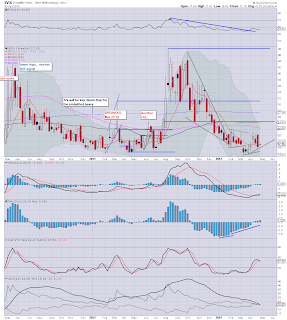 Even taking a bearish VIX scenario, I am still looking for a move to 24. Whether anything significantly over 24 occurs, that would be impossible to even remotely guess. As noted recently, we've had two major down moves in recent times - both of which were each motivated by a catalyst. In 2010..the Greek 'crisis round'1', in 2011 the 'American Govt might not pay its debt'. Will the market need something to kick it below at least sp'1300 in weeks to come?

The bigger VIX weekly cycle does help put things into perspective, and the VIX is still picking up a little underlying upside momentum. Clearly, a break over 21 will be key in the new month of May.
Posted by Trading Sunset at 22:30:00
Email ThisBlogThis!Share to TwitterShare to FacebookShare to Pinterest
Newer Post Older Post Home