When will the Moon Rocket Land?

Today was another smack in the face for most of the bears. Interestingly, even clown channel appears increasingly edgy at the current uptrend. Yet nothing has changed, there is no fear out there. Every little pull back of 3, 5, or 7 pts is being bought up.


IWM was the most decisive index-breaker of the day 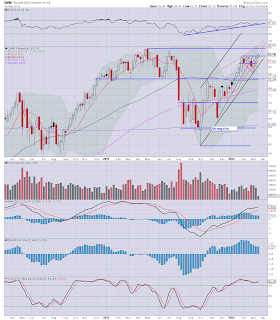 A clear break above the 83 resistance level -as I had suggested (and traded upon) last Friday. We certainly  closed off the intra-day high, but its still an important close above a key level. The upper bol' of 87 is a very good primary target for those long right now...including yours truly. 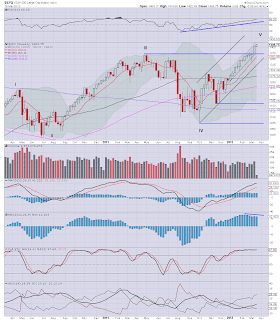 Another 5pts on the Sp' today, the upper bol of 1435 is certainly the first soft target, with 1440 the next main target. Will the coming Greek bond interest payment allow the market to gap right over the next main level, solving that issue?

That's just it, it makes no sense for the market to stop here. Why would it? Sure, the VIX is low, the VIX 'skew' is at historic highs, but many cycles offer significantly more upside. 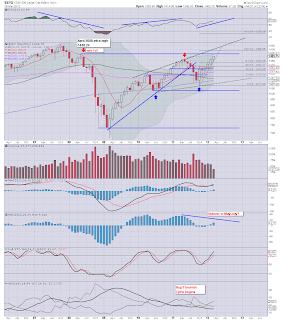 Sp'1440 seems highly probable, and the trend remains very much aiming for 1550. 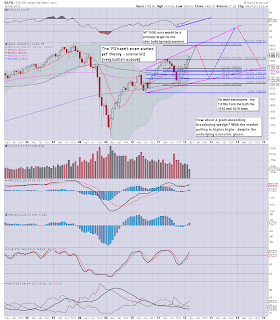 The 1.6x fib from the recent 1078 October low is...none other than the precise area where the current upper channel line (pink), and the current near term trend line (grey) are both pointing at...1550.

Its something any permabear with serious money needs to consider in the coming days and weeks. As noted a few times already, if we break over 1440 (with consecutive closes over 1455/60), then another 100pts 'free money' is likely. For the bears, that is obviously a truly sickening thought.

For the moment at least...the moon rocket...remains on cruise mode.